Difference between revisions of "Histamine"

This article is still missing information. Join WikiMSK to help expand it

Histamine, or 2-(4-imidazolyl)-ethylamine, is synthesised from the amino acid L-histidine through oxidative decarboxylation via catalysis with histidine decarboxylase.

Itch is thought to be a significant aspect of nociception. It has many similarities to pain, but generates a different behavioural response. Pain elicits a withdrawal reflex, while itch elicits a scratch reflex.

Following a stimulus resulting in itch, the individual experience itch at the site which persists briefly after the stimulus is removed. Following this there is a poorly localised area around the stimulus site, which when exposed to gentle touch, elicits intense itch. This is called alloknesis, and is analogous to allodynia.

There are four types of itch

Itch is transmitted by a dedicated subclass of C fibres, distinct from the polymodal C fibres involved in pain transmission. These so-called "itch neurons" have extensive terminal branching, slow conduction velocities, and a long lasting response to histamine. Itch neurons are not sensitive to mechanical stimuli.

There are no specific itch receptors on peripheral nerve endings in the skin, unlike what we see with pain. It is thought that there may be such receptors in second order neurons.

In the cerebral cortex, with itch PET imaging has shown co-activation of the anterior cingulate cortex, supplementary motor area, and inferior parietal lobe. The activation pattern is similar to that of pain, but without activation of the thalamic and somatosensory cortex.

The reason why rubbing inhibits the sensation of itch is because this stimulates myelinated A fibre low threshold mechanoreceptors. Scratching also inhibits itch though the stimulation of nociceptors.

Itch is a common side effect of morphine. This is not an allergic reaction, but rather due to activation of mu receptors. Kappa and delta agonism does not evoke a similar response. Consequently, naltrexone an opioid receptor antagonist, reduces the itch from morphine, but histamine antagonists have no effect.

Histamine is pleiotropic, if not the most pleiotropic molecule in the body. It is present in many cells. It is released by both neuronal and non-neuronal cells. It is involved in smooth muscle contraction in the lungs, uterus, and intestine; gastric acid secretion; vasodilation; modulation of heart rate and contractility.

Role in the Immune System

Histamine is a hydrophilic vasoactive amine. It is a potent vasodilator being involved in the acute inflammatory response and plays a key role in many allergic reactions.

Mast cells are recruited to sites of tissue injury, and are also resident in most tissues. They release proinflammatory mediators, including NGF upon activation.

The "triple response of Lewis" is a cutaneous response that occurs from the firm stroking of the skin. The same response occurs with the intradermal injection of histamine.

Role in the Nervous System 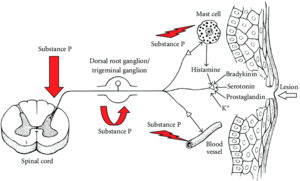 Histamine is a neurotransmitter in both the CNS and PNS. It is involved in multiple homeostatic physiological and pathological processes, for example the sleep-wake cycle, temperature control, memory, pain sensation, synaptic plasticity, and learning.

There are distinct itch-generating neurons in the peripheral nervous system. In the superficial layers of the skin, the release of histamine from mast cells is a pruritogenic event through the binding of H1 receptors in the terminal membranes of a special subgroup of C-afferent fibres.

There is a bidirectional communication of nerves and mast cells in chemical nociception. Histamine along with multiple other chemicals are released in response to tissue injury. These chemicals stimulate the peripheral endings of polymodal sensory neurons through the TRPV1 receptor. Neurogenic inflammation occurs, which describes the release of inflammatory mediators, especially substance P and calcitonin gene-related peptite, from the peripheral endings of afferent sensory neurons. The inflammatory response that is generated causes local vasodilation, plasma extravasation, leukocyte and platelet adhesion, and mast cell degranulation. Substance P also acts to induce histamine release from adjacent mast cells, which activates further sensory nerve endings. Furthermore, the action potential that is generated travels to the dorsal horn, spreads to other branches, and substance P is also released there.

Histamine also causes the release of prostaglandin E2 which sensitises pain receptors (see NSAIDs). It plays a role in acute inflammation related to mast cell degranulation, but it has an uncertain role in chronic inflammation. At low levels it may cause an itching sensation, and pain at higher levels.

Histamine in low concentrations acting on sensory neurons causes pruritis, while at high concentrations causes pain. Histamine-induced itch can convert to pain in the setting of neuropathic hyperalgesia. In the epidermis histamine causes itching, and in the dermis it causes pain with or without itching.

It is also involved in neuropathic pain in the peripheral nervous system. Following nerve injury, there is an increase in H1 receptor expression in injured afferent nerves, and histamine is released by mast cells. Histamine is a chemoattractant of mast cells, and there is also the recruitment of macrophages and neutrophils.[2]

Post-herpetic neuralgia has some distinct effects. Following partial nerve injury with zoster infection, there may be de novo expression of histamine receptors of primary nociceptive neurons (i.e. not just the itch subclass), as well as central sensitisation to histamine, and synaptic connections between histamine-sensitive C fibres to pain-signalling second order neurons.

Histamine injected into various brain areas has either algesic or analgesic effects depending on the dose.

Histamine exerts its effects primarily by binding to G protein-coupled histamine receptors, designated H1 through H4. Histamine also activates ligand-gated chloride channels in the brain and intestinal epithelium.[3] They vary in the pharmacology and signal transduction properties. Therefore the effect on pain physiology varies depending on the receptor subtype that is activated.

The table below is from wikipedia.