Osteonecrosis refers to cell death within bones that occurs from a lack of circulation rather than from disease. The structural components are unaffected. The cells include osteocytes, and usually the marrow contents.

Osteonecrotic bone is not avascular as the vessels are still present. However in all mechanisms of osteonecrosis there is compromise of the circulation. There are four possible mechanisms of compromise

Regardless of the inciting disease or disorder, the processes of osteonecrosis are similar.

Repair is only initiated if the surrounding viable cellular tissue receives a repair signal.

In some areas with a small area of cell death there is no signal for repair generated and the bone infarct is permanent. If this area is small enough and it doesn't compromise the structural integrity of the bone then it may be asymptomatic and non-progressive. This commonly occurs with necrosis exclusively of the medullary bone without subchondral plate involvement. On imaging, calcification of saponified fats may be seen permanently on radiographs, fluid signal changes may be seen on MRI, and peripheral reactive changes may be seen on bone scan.

With osteonecrosis of cancellous bone there is a reparative response. Initially there is a reactive hyperaemia and vascular fibrosis repair process in the adjacent bony tissues. Creeping substitution then occurs which is identical to the process that occurs with the incorporation of bone grafts. Creeping substitution is the slow near-complete resorption of dead bone (or graft) with the simultaneous deposition of new viable bone. Within a few weeks there is revascularisation of the necrotic cancellous bone from the adjacent fibrous tissue. Vessels grow into the medullary canal and revascularise the cancellous bone and the haversian canals.

Within necrotic cancellous bone we see the production of osteoid on the scaffolding of the necrotic trabeculae. The new viable bone thickens the trabeculae, and there is an early increase in bone density, but not necessarily the same strength as normal bone with similar bone density. This increased density is seen on plain films by 6 to 12 months. 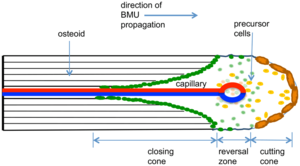 Cortical remodelling unit. Light to dark orange: osteoclasts. Light to dark green: osteoblasts A capillary is shown at the centre of the unit within a Haversian canal. See more detailed version here.

In the cortical bone the histologic appearance is of cutting cones, similar to what is seen at the metaphyseal end of growth plates. The bone in the haversian canals are resorbed, and new bone is produced. Mononuclear cells fuse to form osteoclasts, and resorb the necrotic haversian bone following vascular invasion. There is resorption of the majority of haversian bone but almost none of the interlamellar bone. In this stage the bone initially becomes osteoporotic, and fractures can occur at 18 to 24 months after the onset of necrosis. Osteoblasts subsequently replace the haversian system and the bone regains its original density after it has been repaired which takes at least 2 years.

In both cancellous and cortical bone mesenchymal cells differentiate into osteoblasts and osteoclasts.

There is initially no alteration in the mechanical properties of necrotic bone because osteonecrosis only directly affects the cells of the bone.

If osteonecrosis involves subchondral bone, there is eventual fracture and collapse of the bone which leads to articular surface irregularities and ultimately degenerative osteoarthritis. This process is a secondary mechanical phenomenon. It occurs because with the absence of cells, the bone can't respond to the the loading of normal daily activities. The fracture and collapse are a result of multiple fatigue fractures due to repetitive loading of the bone, and these fractures can't be repaired.

Microfractures are able to elicit a pain response prior to complete fracture and collapse. If functional activities are reduced, then viable bone within or surrounding the osteonecrotic bone undergoes a reduction in bone mass. On plain films necrotic bone can be seen as a relative increased density area of unresorbed necrotic bone with adjacent viable osteoporotic bone.

With the onset of collapse of necrotic bone, the crescent sign appears on plain films reflecting the loss of subchondral support.

The cause of osteonecrosis in most cases is not completely understood. The most common causes of nontraumatic osteonecrosis are idiopathic, and in association with ethanol and corticosteroids. The mechanisms is unknown.

The clinical features are dependent on the size and site of osteonecrosis. With small lesions at sites where there can be revascularisation, usually no clinical effect occurs. If there is a large area of osteonecrosis and revascularisation cannot occur then the area remains necrotic, leading to fracture, progressive collapse, joint incongruity, and joint destruction.

Plain radiographs are normal in early disease. Usually there is initial minor osteopenia, that is then followed by variable changes which can include patchy sclerosis and rim calcification. Gradually microfractures of the subchondral bone increase in number which isn't repaired. Eventually there is collapse of the articular surface and the crescent sign of osteonecrosis. Finally the cortex collapses and fragments, and secondary osteoarthritis is seen.

In the talus, Hawkin's sign refers to subchondral radiolucency of the talar dome seen in AP view that occurs secondary to subchondral atrophy 6-8 weeks after talar neck fracture. Hawkin's sign indicates sufficient vascularity in the talus, whereas disruption of the blood supply to the talar dome results in absence of this sign indicating underlying avascular necrosis.

MRI is the most sensitive imaging modality. It shows changes well before plain films.[1]

Bone scintigraphy is also quite sensitive (~85%) and is the second option after MRI. It is a choice when multiple sites of involvement must be assessed in patients with risk factors, such as sickle cell disease. The findings are different accordingly to the time of the scan:[1]