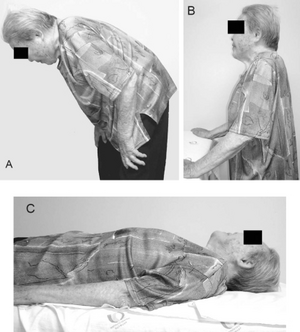 Camptocormia also known as bent spine syndrome is a usually organic disorder characterised by marked flexion (greater than 45 degrees) of the thoracolumbar spine that increases during the day and completely disappears when supine.

The term comes from the Greek words "to bend" (kamptō) and "trunk" ("trunk").

There are two competing hypothesis, one is that it has a CNS cause, and the other that it has a PNS cause. In the CNS hypothesis the affected area is the striatum and its projections to the reticulospinal tract or thalamus. In the PNS hypothesis there is myopathy of the antigravity spine extension muscles. It only rarely has a psychiatric origin.[1]

In those with Parkinson's disease and camptocormia there is a male predominance, older age, longer duration of disease, and autonomic symptoms.[2]

As the day goes on or during walking there is a progressive marked flexion of the thoracolumbar spine. It is relieved by sitting and lying supine. It can also be relieved volitionally by extending the trunk when the patient leans against a wall. There may be associated lateral deviation of the trunk. In two thirds of patients there is a lumbar or thoracolumbar scoliosis.[2]

Treatment is usually unrewarding. Where possible treatment should be directed to the underlying cause.