Internal disc disruption is a condition that affects lumbar intervertebral discs and is the cause of pain in around 40% of individuals with chronic low back pain. It is defined as the presence of isolated, radial fissures that penetrate from the nucleus pulposus through to the anulus fibrosus, however the outer anulus is not breached.[1]

Comparison with other Pathology

Internal disc disruption also isn't the same thing as disc herniation. The fissures contain nucleus pulposus but they have not herniated and the external perimeter of the anulus is intact. The disc may bulge diffusely but there is no focal protrusion 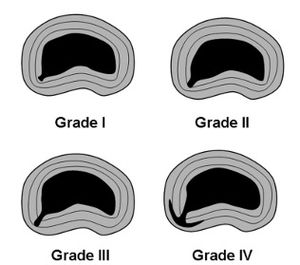 Figure 1. Classification of the fissures in internal disc disruption. Fissures start out radially and then extent circumferentially between the lamellae of the outer annulus. Copyright 2012 Published by Elsevier Inc. [2]

Fissures can be graded based on the extent of penetration into the anulus. The outer anulus can bulge over a fissure but it remains intact, i.e. there is no penetrating defect externally. (figure 1)

Nerve endings are present in the outer one third of the annulus fibrosus. There are nerve endings in the inner annulus. The posterior aspect it supplied by the sinuvertebral nerve. The anterolateral aspect receives branches from the grey rami communicantes of the lumbar sympathetic trunk.

“Some fibers innervating the anterior and lateral aspects of the discs, and to a lesser extent even the posterior aspect of the IVDs, have been found in animal models (rats) to ascend several segments in the sympathetic chain before passing through a gray communicating ramus, anterior primary division, and dorsal root and ganglion to enter the dorsal horn of the spinal cord several segments higher than the level of innervation. This is thought to explain the broad referral patterns (e.g., pain referred into the inguinal region from IVD pathology as low as L5-S1) seen in various presentations of low back pain of primary discal origin” 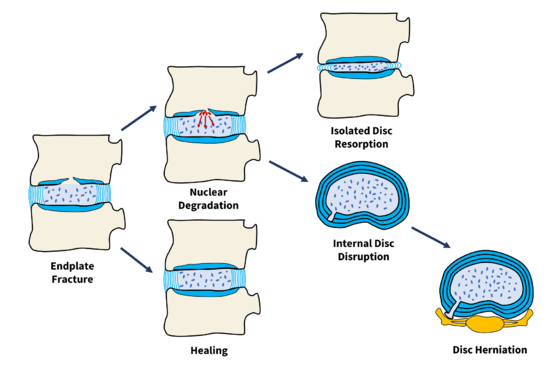 One possible endstage feature of endplate fracture and nuclear degradation is isolated disc resorption. Here the anulus fibrosus is intact (no internal disc disruption) but the nuclear degradation is severe. Following nuclear degradation there is a progressive loss of water-binding capacity. It is less able to sustain pressure and greater loads are taken up by the anulus fibrosus. The anulus eventually buckles and the disc loses height. Reactive changes occur with osteophytosis in the zygapophysial joints and anulus fibrosus. This state, with disc narrowing and osteophytosis, is called "isolated disc resorption.' At this point nerve roots can be compressed in the canal or foramen. In contrast, a normal ageing disc actually retains its height.

Essentially internal disc disruption is one of the consequences following injury to an adjacent vertebral endplate. This can occur following a single sudden compressive force, or through fatigue failure from repetitive lower forces. End plate fracture can occur with as few as 100 repetitions with compressive loads as low as 50% to 60% of the ultimate tensile strength of the end plate.[3] Torsional tears to the disc can result from forcible rotation about the facet joint, with the disc most susceptible in flexion-rotation.[4]

While the exact sequence of events is uncertain, it is well established that end-plate fracture is an important inciting event for internal disc disruption. Mechanistic theories include an inflammatory reaction to proteins of the nucleus, and a reduction in the pH leading to an increased activity of metalloproteases.

Following nuclear degradation, it is thought that the matrix isn't able to brace the anulus from buckling inwards. It may be that continued normal activities of every day life progressively leads to tearing of the anulus in this unsupported state with increased loads placed on it.

Internal disc disruption can progress to disc herniation if the fissure extends through the entire thickness of the anulus. It is very difficult for a normal nucleus pulposus to herniate even if the anulus is severed experimentally in studies with cadavers. A degraded nucleus is however able to herniate with relatively much less force. 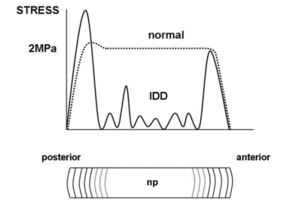 In the setting of internal disc disruption, the disc is not able to bear compression loads normally. There are irregular stresses that have reduced amplitudes, even reaching zero in some areas. This pattern is seen immediately following end-plate fracture.

Radial fissures aren't degenerative or age related changes as they are independent of these two factors. They are strongly associated with the disc being painful on provocative discography.

Central sensitisation or "primary pain" is not the typical cause of pain. This has been shown in studies where discography has been done in adjacent segments finding non-painful discs. If these patients had central sensitisation then all discs would be painful, but this is not what is found. Patients with elevated levels of psychological distress may have elevated pain scores with discography, but the association is not absolute. Furthermore, spatial summation as is seen in central sensitisation does not in low back pain.[6]

Chemical nociception occurs via degraded nucleus pulposus matrix and inflammatory chemicals. NGF expression correlates with microvascular and nerve fibre ingrowth into the annulus fibrosus and nucleus pulposus.[7] TNF-a has been shown to provoke biochemical degenerative changes in vitro, and possibly mediates pain (as does IL-1b).[8] Mechanical nociception is thought to occur via radial fissuring leading to increased loading on the remaining intact lamellae

Neoinnervation (sympathetic and nociceptive fibres) also occurs along radial fissures, and this process can lead to innervation of the internal anulus and even the nucleus. 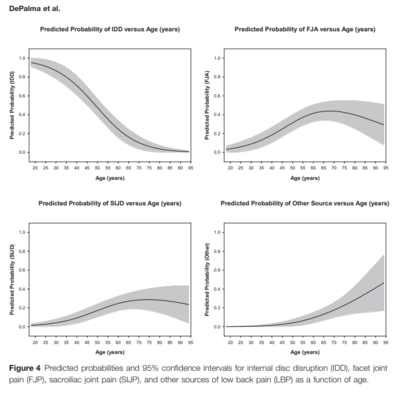 Figure 3. Sources of pain in chronic low back pain as a function of age.[9] Copyright © 2020 American Academy of Pain Medicine

Internal disc disruption is common in those with chronic low back pain who have invasive tests, with different studies reporting prevalence rates of 39%, 26%, and 42% in patients attending specialist clinics using stringent diagnostic criteria: positive discography and a grade 3+ fissure on post-discography CT.

The definitive diagnostic test for internal disc disruption is disc stimulation to test for pain and post-discography CT to visualise the disruption. Disc stimulation can be done alone which diagnoses the source of the pain to be the disc. The post-discography CT then further confirms the cause of the pain as internal disc disruption. The false positive rate is less than 10%, previous studies claiming higher false positive rates had significant methodological flaws.[1]

For determining whether a particular disc is painful, the gold standard is provocation discography. This involves inserting a needle into the nucleus pulposus and distending it with contrast to a predetermined pressure. The test is positive if the pain is reproduced (greater than 7/10) at pressures of less than 50 psi (preferably less than 15 psi) and stimulation of adjacent discs doesn't reproduce the pain. [10]

In normal discs, when the nucleus pulposus is distended, the innervated outer third of the anulus is protected by the dense inner two thirds of the anulus. Only at pressures over 80 psi are normal discs typically painful.

Provocation discography is not commonly done in New Zealand. This may be because there is a non-zero risk of discitis, and a lack of good available follow-on therapeutic interventions. MRI findings are used as a substitute, as signs of IDD on MRI in the context of low back pain constitute a 70% post-test probability of the affected disc being painful based on a pre-test probability of 40%.[1]

Follow discography, visualisation of the fissure can be done through post-discography CT scan imaging. With discography, contrast is injected into the nucleus. With the contrast in place, CT imaging shows up any fissures and their grade.

MRI can be used to look for two specific findings: modic changes and high intensity zones. Both of these features are independently correlated with pain, however they are not exclusive to the symptomatic population. They are not pathognomic for that segment being the cause of pain, but are highly specific.

Philosophically, diagnosis is important for its negative therapeutic utility (it makes certain interventions less likely to be recommended such as surgery in the context of negative or indeterminate discography), and diagnostic utility (it provides an explanation and stops the search for a diagnosis). There does not appear to be a good argument for its positive therapeutic utility (whether diagnosis leads to a better outcome) due to lack of high-quality research looking at this question.[1]