The coccyx (plural: coccyges) is the series of rudimentary vertebrae forming the caudal termination of the vertebral column and is positioned inferior to the apex of the sacrum. The coccyx is one leg of the tripod formed in conjunction with the ischial tuberosities for support in a seated position. Additionally, it serves as the insertion site for the muscles of the pelvic floor and those that contribute to voluntary bowel control and supports the position of the anus.

For the purposes of numbering the vertebral segments, "Co" is used as the abbreviation for each coccygeal level, e.g. Co1, Co2, etc. Clearly "C" is already used for the cervical vertebrae. 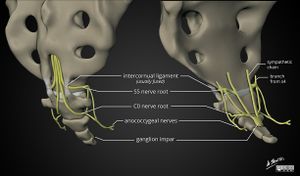 The coccyx is formed from four rudimentary vertebrae and does not contain a spinal canal, pedicles, laminae or spinous processes. The first segment is the largest, and the subsequent are smaller in size. Structure of the coccygeal vertebral junctions is variable and age-related, ranging from fully developed to rudimentary intervertebral discs with varying degrees of cystic or fibrotic change, to fusion of the vertebrae in the later decades.

The coccyx consists of an anterior and posterior surface, two lateral surfaces, an apex and a base.

The coccyx arises from a caudal eminence present from weeks 4-8 of gestation. This caudal eminence regresses by birth, leaving the four precursor vertebrae. Ossification takes place from the centre of each precursor vertebra, with the cornua ossifying from separate centres. The first segment appears between ages one to four, the second between ages five to ten, the third between ten and fifteen years, and the fourth between fourteen and twenty years. Segments do not unite until after age twenty-five or thirty. The coccyx only fuses with sacrum late in life, and this occurs more prevalently with females than males.

The word coccyx is derived from the Greek word for “cuckoo” because of the similarity of its appearance to the cuckoo's beak when viewed from the side.

Part or all of this article or section is derived from Coccyx by Dr Kieran Kusel and Dr Juliana K. Yee et al., used under CC BY-NC-SA 3.0