The anterior cruciate ligament (ACL) is an important ligament for stabilisation of the knee. It is frequently injured by athletes and trauma victims

The ACL provides the primary resistance to anterior translation of the tibia on the femur. It also provides secondary restraint against tibial rotation, varus, and valgus forces. 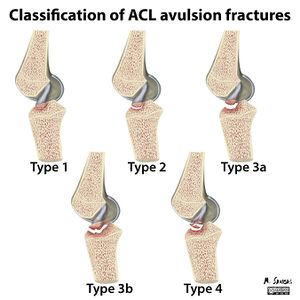 The most commonly used classification is from Zarincznyj in 1997, which was modified from Meyers and McKeevers in 1959. Under this system, injuries are classified into four types.

Inspect for quadriceps wasting and effusion. Assess range of motion, there may be loss of terminal extension.

Due to uncontrolled rotation, injury to the lateral meniscus is very common in ACL rupture. It is more common than the well-known "unhappy triad" which refers to injury to the medial meniscus, MCL, and ACL. Test MCL stability to valgus load in extension at 20 degrees of flexion.

Kissing bone bruises are often seen on MRI imaging due to the combination of unrestrained extension and medial rotation. This allows the tibia to slide anteriorly and strike the lateral femoral condyle.

Once torn, it doesn’t heal. Reconstruction does not make it normal – posttraumatic osteoarthritis can occur regardless of management