Stimulus response curve showing allodynia, hyperalgesia, and hyperaesthesia. Any reduction in pain threshold is allodynia, while any increased pain to supra-threshold stimuli is hyperalgesia. 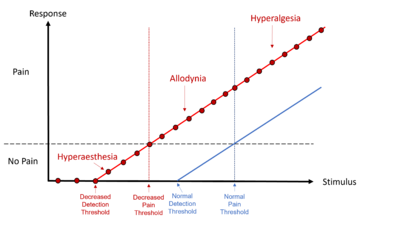 The IASP defines allodynia as "Pain due to a stimulus that does not normally provoke pain." It is a nociceptive sensation or aversive response elicited by a normally non-nociceptive stimulus. "allo" means other, and "dynia" means pain. It can occur with mechanical, thermal, or chemical stimuli (e.g. tactile allodynia, heat allodynia).

Examples of normally non-painful sensations that may be painful in allodynia are pain from light stroking of the skin with the gliding of clothing, or pain from the intrinsic heat generated by the body.

In contrast, hyperalgesia is defined by the IASP as "Increased pain from a stimulus that normally provokes pain." An example is the prick of a needle, which is normally painful, but with hyperalgesia there is a greater than normal magnitude and/or duration of pain.

The sensitised neurons in the spinothalamic tract produce either de novo activity or greater than normal response to both innocuous stimuli (allodynia) and noxious stimuli (hyperalgesia).

Hyperpathia is essentially a type of allodynia and hyperalgesia that describes a complex sensory experience. The IASP define hyperpathia as "a painful syndrome characterised by an abnormally painful reaction to a stimulus, as well as an increased threshold."

Hyperpathia may occur alongside allodynia, hyperaesthesia, hyperalgesia, or dysaesthesia (dysaesthesia is an abnormal sensory experience, either unpleasant or evoked). Some view it has a type of hyperaesthesia, or even equate the two terms. There is both an elevation of the detection threshold and central hyperexcitability. It can occur in axonal loss and in central sensitisation states.

There are four main features of hyperpathia.[1]

The IASP do not provide a definition for alloknesis. It is the itch or pruriceptive sensation or scratching behaviour that is elicited by a stimulus that is not normally pruriceptive. "allo" means other, and "knesis" means itch. In the normal state, light stroking of the skin may elicit a ticklish sensation, but not itch. Following a mosquito bite or in an area of dermatitis, light stroking can evoke itch or exacerbation of an already present itch.

Hyperknesis on the other hand is increased pruriception from a stimulus that normally provokes pruritis. An example is a fine diameter hair, which normally elicits a slight prickle and itch sensation, is magnified in intensity and/or duration in the setting of hyperknesis.

Allokinesis can be produced experimentally by injected histamine intradermally. Histamine causes a red space, flare, and wheal to form. The flare is caused by a local axon reflex with the release of vasodilatory neuropeptides from nerve terminals. Wheal formation is due to local oedema. Allokinesis is present within the wheal, and hyperkinesis develops in the surrounding skin, as well as punctate hyperalgesia.

However, flare and wheal reactions are not necessary for pruritis to occur. This is shown through the insertion of cowhide spicules into the skin, which cause pruritis, but not a wheal or flare.

It is thought that there are pruriceptive spinothalamic neurons that are sensitised to light mechanical touch and punctate stimulation.

In contrast, if skin is injected with capsaicin, there is absent or reduced histamine-induced itch.[3]

The reason why rubbing inhibits the sensation of itch is because this stimulates myelinated A fibre low threshold mechanoreceptors. Scratching also inhibits histamine evoked neural activity in pruriceptive spinothalamic neurons though the stimulation of nociceptors.