There are eight carpal bones of the wrist ("carpus") which are held together by ligaments. With ligamentous injury the wrist can become unstable and lead to post-traumatic osteoarthritis.

The carpal bones give stability to the wrist in various positions. The lunate plays a key role in carpal stability.

There are two rows and three columns. The bones are intercalated meaning that they are tightly tethered to each other (figure 1).

The scaphoid acts as a bridging bone and translates some of the movements from the proximal to distal row in giving more stability to radial and ulnar deviations.. There is motion within and between rows.

There are three columns. On the radial side is the lateral column and this contains the scaphoid, trapezoid, and trapezium; it provides longitudinal stability. On the ulnar side is the medial column and this contains the triquetrum and provides rotational stability. The lateral and medial columns move to accommodate ulnar and radial deviation. The central column contains the lunate, capitate, and hamate; it doesn't deviate a lot, rather there is movement around it.

The bones have a complex geometry that allows them to remain in content with movement. However there is little bony congruity and with that there is less inherent stability. There is a network of ligaments that hold the bones in their correct positions. The ligaments are categorised as intrinsic (carpal to carpal) and extrinsic (radius or ulna to carpal).

The extrinsic ligaments connect the radius to the carpus.

The deformity can be dynamic or static. This is why it is important to take loading radiograph views (clenched fist, radial and ulnar deviation). A static MRI can incorrectly grade an injury without these dynamic x-ray views.

The lunate is in a state of dynamic balance. As long as the scapholunate and lunotriquetral ligaments are intact, and there are no other problems in the distal radius, the lunate sits in the middle and doesn't move in a dorsal or volar direction. All the forces are balanced.

When the scaphoid flexes it tries to pull the lunate towards the volar side. When this happens the lunotriquetral joint on the other side stops it from going down. The triquetrum tries to extend to keep the lunate in a balanced position.

When a carpal ligament is disrupted, the bones don't move in their normal concerted fashion, leading to abnormal bone positions and contact points, and overloading of the joint surfaces. Carpal instability can be defined as the inability of the wrist to maintain a normal balance between the articulating surfaces under physiologic loads (dyskinetics) and/or movements (dyskinematics)

For DISI and VISI injuries the lunate follows the unbalanced force. DISI refers to dorsal intercalated segmental instability in which the scapholunate ligament is injured. VISI refers to volar intercalated segment instability where the lunotriquetral ligament is injured. The name refers to the abnormal position of the carpal bones due to abnormal tethering. A third pattern is perilunate dislocation, which is one of the most severe forms of carpal instability where multiple intrinsic and extrinsic ligaments are torn and the lunate completely dissociates from the other carpal bones. Due to the high energy associated with this injury, there may be associated neurovascular injury. See video.

If the scapholunate instability is not addressed then there can be progression to scapholunate advanced collapse (SLAC). The degenerative change starts in the radioscaphoid joint, and spreads with the lunate fossa being the last one to be affected.

In a series of 535 patients with wrist pain of unknown origin who underwent dynamic radiography, scapholunate dissociation was present in 5.8%, DISI in 2.2%, VISI in 1.7%, with a total prevalence of carpal instability of 9.7%.[2]

Carpal instability is present in 30% of patients with displaced intra-articular radius or scaphoid fractures, but the diagnosis is often missed.

The most common injury mechanism is a fall on an outstretched hand with an extended wrist. High energy trauma such as with contact sport or motorcycle accidents are other causes. Delayed presentations are not uncommon.

The main presenting complaint is pain, typically over the dorsum and dorso-radial aspect of the wrist which is aggravated by loading the extended wrist or with strenuous activity. 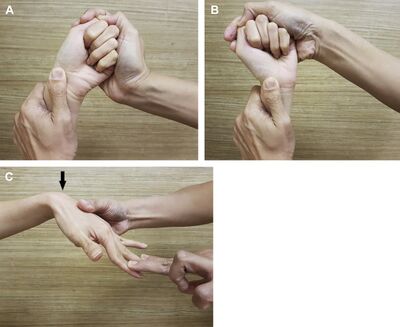 A and B: Watson test with scaphoid pressure during passive movement from ulnar to radial deviation. C: finger extension test.

The main physical findings are swelling, reduced range of motion, and localised tenderness. In extreme cases there may be neuropathies and deformities with a palpable displaced lunate.

Look for evidence of previous operations. Previous operative history is important, for example a scapholunate disruption could have been missed at the time of a distal radius fracture repair, or there may have been a previous non-union.

The range of motion is usually reduced.

Overall clinical examination is insufficient to achieve any measure of diagnostic confidence.

There are no pathognomonic clinical signs of carpal instability, with symptoms and signs often being quite subtle. One pitfall is failure to accurately interpret the history from the patient. The patient may say that they feel like a bone has moved out of their wrist . The examiner then sees a normal x-ray and assumes everything is fine and incorrectly diagnose wrist sprain. The x-ray is normal in 25% of cases of lunate dislocation, and often the x-ray finding are quite subtle.

For VISI, once there is a static deformity with a reduction in the SL angle, the dorsal radiocarpal ligament is also injured. Associated injuries are to the TFCC and UT ligaments. This is because if the lunotriquetral ligament is injured, then the force went from the ulnar side, and if the force is great enough to cause damage to the LT ligament then usually there is damage to the TFCC and UT ligaments as well.

Perilunate injuries: occurs with force pushing the wrist into extension and ulnar deviation. Multiple ligamentous injuries are necessary to tear the distal row from the lunate to produce perilunate dislocation.

Radiography assesses for static and dynamic carpal instability. The views are:

The most important angle is the ScaphoLunate angle (figure 3). The most important bone to pay attention to is the lunate. To measure the SL angle, draw a line between the inferior margin of the scaphoid tuberosity and body of the scaphoid, draw another line perpendicular to the lunate. The angle between these is the SL angle. The normal range is 30-60 degrees. Anything less than 30 is called VISI, anything more than 60 is called DISI.

When interpreting the SL angle in static instability, remember that if the carpal bones weren't connected, the scaphoid would flex (move in a volar direction), and the triquetrum would extend (move in a dorsal direction). Therefore when the SL is injured, the uninjured LT ligament drags the lunate into extension (DISI). While when the LT is injured, the intact SL ligament drags the lunate into flexion (VISI).

Partial tears are more difficult to assess in static views, hence the importance of the stress views (figure 5). Static radiographs on their own as signs of carpal instability using dynamic radiography have a sensitivity of 56%, specificity of 96%, and +LR of 15.5.[2]

MRI may be helpful but the sensitivity is only 60-70%.

Arthroscopy is often considered to be the gold standard. However ligamentous injury on arthroscopy has poor correlation with symptoms. Ligamentous interruption is commonly found bilaterally.[4]

Overall there is no high level evidence to guide treatment. Post-traumatic osteoarthritis is an expected outcome in severe or chronic cases.

Partial tears of the scapholunate and lunotriquetral ligaments in the presence of normal x-ray findings are usually treated nonoperatively with immobilisation and rehabilitation. If there is persistent symptoms then wrist arthroscopy is the next step, and if a tear is confirmed then operative debridement and stabilisation can be done.

In complete tears, the initial treatment is operative, and there are a variety of techniques with the aim of restoring and maintaining carpal alignment. Usually screws and pins are used.

In perilunate dislocation initial management may be closed reduction, however often this is not successful. Reduction can be done operatively along with nerve decompression.

See Tan and colleagues for review of the surgical treatment options.[1]