Definition
Cervical Spine Pain
Pain perceived as arising from anywhere within the region bounded superiorly by the superior nuchal line, inferiorly by an imaginary transverse line through the tip of the first thoracic spinous process, and laterally by sagittal planes tangential to the borders of the neck[1]

This can be further divided into

Bogduk emphasises that cervical spinal pain is perceived posteriorly He states that pain in the region of the anterior cervical spine is called throat pain and there is a lack of any definition by an international authority. He further states that practitioners wanting to use the term "anterior neck pain" need to prove that it is coming from the cervical spine.[2] He does not provide any references for these claims. In the editor's opinion, the claims are wrong.

Definition
Cervical Radiculopathy
Objective loss of sensory and/or motor function as a result of conduction block in axons of a spinal nerve or its roots. [1]

Cervical spine pain and cervical radicular pain are two completely different entities. They have difference causes, and different evidence base for diagnosis and management.

Cervical radicular pain is a symptom. It is lancinating, shooting "electric" pain that travels down a limb in a narrow band. It is due to stretching of an already inflamed nerve root. The pain may be momentary. It usually co-exists with cervical somatic and somatic referred pain. There are typical referral patterns (dynatomal, not dermatomal), however many patients will not have a distinct referral pattern.[4]

Definition
Somatic Referred Pain
Pain perceived in a region innervated by nerves other than those that innervate the source of the pain.[1] 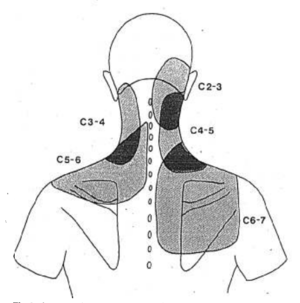 The mechanisms is convergence. Sources in the cervical spine can have pain referred to the head, upper limb, interscapular region, and anterior chest wall. Headaches occur after noxious stimulation of C2-3 zygapophyseal joints, lateral atlanto-axial joints, and atlantooccipital joints. The following descriptors are used for regions of referred pain.

Scapular Pain: Pain perceived as arising substantially within the area encompassed by the borders of the scapula.

Lower Scapular Pain: Pain perceived as arising substantially within the area encompassed by the borders of the scapula but below its spine.

Shoulder Pain: Pain focused over the top of the glenohumeral joint, centred over the lateral margin of the acromion.

Posterior Shoulder Pain: Pain focused over the posterior fibers of the deltoid muscl

Referred pain to the thoracic wall may be focused over the anterior, lateral, or posterior chest wall and should be described in such terms. Its exact topographic location can be specified by enunciating the ribs that it spans.