From WikiMSK
This article is still missing information. Join WikiMSK to help expand it

Conversion Disorder is also known as Functional Neurological Symptom Disorder and is characterised by neurological symptoms (weakness, abnormal movements, or nonepileptic seizures for instance) that are incompatible with a neurologic disorder but nevertheless cause distress and impairment. This article mainly focuses on motor and sensory symptoms. It is a subset of Somatic Symptom Disorder.

The goal of the assessment is to identify inconsistences between symptoms and recognised disease.

Many cases are said to have la belle indifference in that they appear unusually cheerful despite their symptoms. However in nearly all cases patients say that were trying to appear cheerful so that the examiner didn't think they were mentally ill.[2]

There is some limited evidence of the following examination signs being useful in identifying conversion disorder:[1] 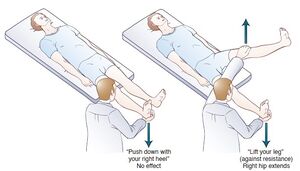 Here the patient is unable to extend the right hip and press the heel into the bed on direct testing. The normal left leg is flexed off the bed against resistance and there is involuntary right hip extension.[3]

This is a common finding in conversion disorder and is used upon finding hip flexion or hip extension weakness or direct testing. It is based on the crossed extensor reflex.[3]

Hoover's sign can still be positive in patients with organic disease for example if the patient wants to prove to you that they are weak, distress, or difficulty in understanding your instructions. Pain can also affect the sign in several ways.

There has been early research on applying this sign to arm weakness with shoulder abduction and adduction.

Dragging monoplegic gait: Here there is a striking "dragging gait" where one leg is dragged with the knee extended and the hip internally or externally rotated. This is not a common finding.

Give-way or collapsing weakness: The patient is asked to exert force in a particular direction while the examiner lightly exerts force in the opposite direction. In conversion disorder there is an abrupt decrease in resistance as the limb suddenly gives way. This sign can be falsely positive in chorea, pain, joint problems, and difficulty in understanding instructions.

Drift without pronation: The patient is asked to hold their supinated arms in the air with fingers adducted and eyes closed. In conversion disorder the affected limb by drift downwards but without the accompanying pronation seen in upper motor neuron lesions.

Sternocleidomastoid test: The patient is asked to rotate their head against resistance. In conversion disorder there is difficulty in rotating towards the affected side.

Global or inverted pyramidal pattern of weakness: for example extensors being weaker than flexors rather than the organic expected opposite finding.

Midline splitting of vibration: In conversion disorder there may be splitting of altered vibration sense over the forehead and sternum. As these are single bones splitting should not occur in organic disease.

Tremor entrainment test: The patient is placed in a position where the tremor is at its maximum, which is usually with the arms out in front. Move the least tremoring or non-tremoring limb slightly away from the other limb and ask the patient to focus on it. The patient is asked to tap another limb at a different frequency to the tremor, such as tapping with their thumb and forefinger to a rhythm set by the examiner. The rhythm should vary making it faster and slow and the patient should be encouraged to follow the examiner.

The sign is positive with a change in tremor with distraction of attention. In those with conversion disorder there are three signs that indicate a positive test.[4]

Waddel's signs: These signs have been described in patients with back pain and conversion disorder. They are not proof of malingering or exaggeration but may indicate that reports of pain are increased when the doctor and patient are paying attention to it.

The following subtypes have been observed

Investigations are usually necessary. This is because clinical diagnosis cannot exclude a comorbid organic disorder. It is best to do all the necessary tests at the same time rather than sequentially in order to not delay the diagnosis. The patient should be warned that investigations are likely to be normal or only show age related change.[5]

In the DSM V criteria conversion disorder is based on finding incompatibility between the symptoms and recognised medical conditions. It uses both negative and positive signs.

Misdiagnosis is uncommon. In one study of 1144 patients in Scotland there was misdiagnosis of only 4 patients at 18 months.[6]

The prognosis is often poor. In most patients functional motor symptoms persist. Improvement is seen in one third. Sensory symptoms have a better prognosis than weakness. Fixed dystonia has the worst prognosis.

Good prognostic factors are a willingness to accept the potential reversibility of symptoms, good interaction with the doctor, short duration of symptoms, and lack of other physical symptoms.

A successful explanation leaves the patient feeling like they have "gotten to the bottom" of their problem, while feeling that they have something genuine, but potentially reversible with treatment. In those who do not improve there is value in accepting the diagnosis in order to stop doctor shopping.

Showing patients their positive signs such as the Hoover sign for weakness or the tremor entrainment test for tremor is helpful. The patient should be told that the signs indicate that their problem is potentially reversible.

The terminology used is important. The term psychogenic or conversion disorder may make the patient feel like the doctor thinks they are crazy. Functional is a more acceptable term. The term functional describes a mechanism and leaves the aetiology more open. This is compatible with the biopsychosocial model.[5]

The textbook neurology in clinical practice provide the following ingredients for successful explanation for functional symptoms/disorders.

There is sustained benefit even for patients with chronic symptoms. There are specific features in the physiotherapy approach. For example rather than paying attention to the weak limb, distraction techniques are used to allow better movement. Graded exercise can be helpful. Mental imagery and mirror therapy can also be used.[5][7]

There is evidence of benefit for cognitive behavioural therapy.[5]

Tricyclic antidepressants are favoured, and outcomes are not affected by the presence or absence of depression. Tricyclics can be especially helpful in pain and insomnia. However patients may be especially sensitive to drug side effects and so they should be started at a low dose and increased slowly.[5]