Injectable corticosteroids are synthetic analogues of the adrenal glucocorticoid cortisol (hydrocortisone). Cortisol is produced by the zona reticularis of the adrenal cortex. Corticosteroids have an effect at the cellular level, with modulation of the transcription of a large number of genes. They act directly on nuclear steroid receptors. They reduce the production of a variety of pro-inflammatory mediators and increase the production of anti-inflammatory mediators.

Glucocorticoids are synthesised rapidly following ACTH stimulation because they can't be pre-synthesised and stored in the adrenal glands. They are synthesised from cholesterol in a process called steroidogenesis.

Glucocorticoids are released by the adrenal glands with a circadian profile. This circadian profile is upregulated by the hypothalamic-pituitary-adrenal axis (HPA). Cortisol levels peak in the mornings and are lowest at night.

While the systemic level of glucocorticoids is maintained by synthesis in the adrenal glands, the tissue and cellular availability is maintained through various mechanisms

Most synthetic glucocorticoids do not bind to CBD and are not metabolised by 11β-HSD 2. 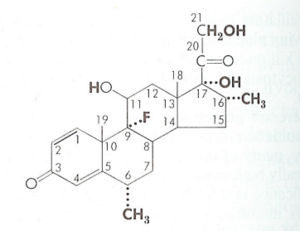 The first corticosteroid used for its anti-inflammatory effect was Cortisone. The structure was modified to increase the glucocorticoid potency and reduce the mineralocorticoid potency with the synthesis of prednisolone and methylprednisolone. In a number of currently available compounds, the mineralocorticoid electrolyte effects are now of no serious consequence, even at the highest doses used. Further advancements included fluorination (e.g. dexamethasone).

Changes in the molecular structure can cause changes in biological potency. This can be due to alterations in absorption, protein binding, rate of metabolic transformation, rate of excretion, ability to traverse membranes, and intrinsic effectiveness of the molecule at its site of action. Modifications of the pregnane nucleus has been used for therapeutic value.

Ring A. The 4,5 double bond and the 3-keton are both necessary for typical adrenocorticosteroid activity. Prednisone and prednisolone introduce a 1,2 double bond. This enhances the carbohydrate-regulating potency resulting in an enhanced ratio with respect to its sodium-retaining potency. Prednisolone is also metabolised more slowly than cortisol.

Ring B. 6α substitution has unpredictable effects. For cortisol, 6α methylation increases its anti-inflammatory, nitrogen-wasting, and sodium-retaining effects. While 6α-methylprednisolone has a slightly greater anti-inflammatory potency and less electrolyte-regulating potency compared to prednisolone. Fluorination in the 9α position enhances all biological activities of the corticosteroids, apparently due to electron-withdrawing effect on the 11-beta-hydroxy group.

Ring C. Oxygen function at C 11 is indispensable for its significant anti-inflammatory and carbohydrate-regulating potency (cortisol vs 11-dexoxycortisol). However this is not necessary for its high sodium-retaining potency (desoxycorticosterone)

Ring D. 16-Methylation or hydroxylation eliminates the sodium-retaining effect but only slightly modifies potency on metabolism and inflammation

Cortisol metabolism has been studied extensively. It is generally assumed that other related compounds have similar metabolism. Cortisol has a plasma half-life of around 1.5 hours. The metabolism and half-life of corticosteroids is greatly slowed down with the presence of a 1,2 double bond or a fluorine atom. Laboratories measure urinary cortisol and metabolites with the reduced ring A as "17-hydroxycorticosteroids." These compounds and those where the ketone at carbon 20 has been reduced are included in the group "17-ketogenic steroids." Urinary metabolites that have lost their side chain are included in the "17-ketosteroids." It is estimated that the liver metabolises at least 70% of secreted cortisol.

Glucocorticoids act through both genomic and non-genomic mechanisms.

Glucocorticoids are lipophilic and hence can easily pass through plasma membranes. The genomic action is mediated through glucocorticoid receptors to stimulate tissue specific gene expression. This process usually takes hours or days.

Annexin A1 (also known as lipocortin 1) is a potentially important mediator regulated by glucocorticoids that contributes to resolving inflammation by various complex mechanisms including the reduction of neutrophil recruitment and the promotion of clearance of apoptotic cells by macrophages.

Some ongoing therapeutic research questions include whether Annexin A1 based pharmacological interventions could be as effective as exogenous glucocorticoids with fewer side effects,[2] and developing selective glucocorticoid receptor agonists to minimise transactivation.

Some of the anti-inflammatory effects seen clinically occur much too fast to be explained purely from the genomic mechanism of action. For example in croup, nebulised corticosteroid administration causes a rapid clinical effect, possibly due to non-genomic effects through increased α and β adrenergic activity.[3]

There may be a direct chondroprotective effect on cartilage metabolism, for example it promotes the production of articular surfactant. There may also be a direct analgesic effect.

There is limited evidence to help guide the choice of a specific glucocorticoid for injection. Depot formulations stay at the injection site displaying mostly local effects, but some system effect can happen. The choice is largely based on availability, cost, and versatility. At the time of writing, the funded corticosteroids for depot injections are dexamethasone, methylprednisolone, and triamcinolone. Betamethasone is also available but is only partially funded. Dexamethasone is available on medical practitioner supply order, but only 5 vials at a time. Many practitioners tend to use particulate corticosteroids (like triamcinolone) for joint and soft tissue injections, and non-particulate corticosteroids (like dexamethasone) injections where there is a rare risk of serious vascular injury like spinal injections.

A post-injection flare is increased pain (grater than 2 or more points on a 0 to 10 scale) within 24 hours following a steroid injection. There is a wide range of reported incidences, potentially up to one third of patients, and it tends to last 1-5 days. The mechanism is an irritant effect of steroid crystals, e.g. triamcinolone and methylprednsolone. Microcystalline aggregates of steroid induce an inflammatory response. A flare does not affect the overall response to the steroid and doesn't predict the long term outcome from the injection. If the pain is increasing after 24 hours then consider infection.