Idiopathic Scoliosis is a three dimensional spinal deformity in frontal, sagittal, and axial planes. It is defined as a coronal spinal curvature of at least 10° with rotation of the vertebral bodies and has unknown aetiology.

Idiopathic scoliosis is the most common structural spinal deformity in children and adolescents. It affects about 2-3% of adolescents, but the prevalence is dependent on the cut-off point chosen, and is only 0.1-0.3% for curvatures greater than 30°.

The most common scoliosis is a thoracic curve to the right side. The primary age of onset is 10 to 15 years.

With small curves there is an equal prevalence of affected males and females. However there is a female predominance with increasing curve magnitude.

The exact aetiology is unknown. There appears to be asymmetrical growth of anterior column of the vertebrae with resulting tethering of the posterior elements. The underlying cause for this imbalance of growth is unknown.

There are thought to be genetic factors controlling for scoliosis. This has been indicated by population and twin studies. However no specific gene or genes have been found. There is variable expression and so environmental factors also contribute to the pathogenesis.

Calmodulin and melatonin interact with the actin/myosin system with calmodulin regulating calcium influx from the sacroplasmic reticulum and melatonin binding to calmodulin as an antagonist. Research has suggested abnormal levels of these substances in scoliotic individuals. 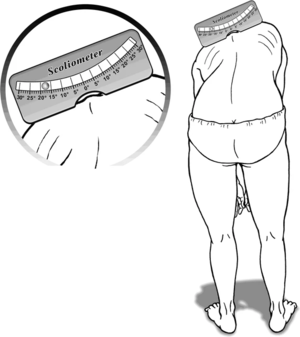 Figure 1. Adam's test with a scoliometer[2]

From behind observe the following:

From the side observe the following:

From the front observe the following:

Child and adolescent idiopathic scoliosis accounts for approximately 80% of cases. It is a diagnosis of exclusion and is differentiated from neuromuscular and congenital scoliosis. In adults degenerative scoliosis is a consideration. Also non-structural causes such as leg-length discrepancy occurs. 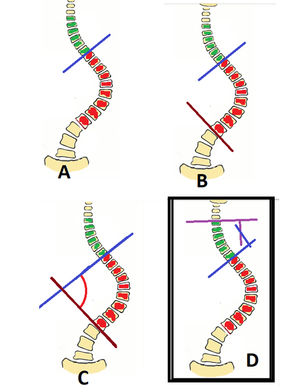 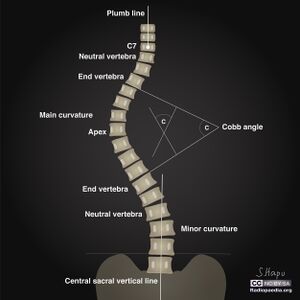 Figure 3: Cobb angle and Central Sacral Vertical Line (CSVL) measurements. The CSVL is constructed on frontal films as a line connecting the top of the iliac crests, and a second line drawn perpendicular to the first bisecting the sacrum.[4]

Initial radiological investigations should include whole spine radiographs from the cranium to the pelvis, including anteroposterior (or posteroanterior which dramatically reduces radiation) and lateral views.

The patient should be standing barefoot with a relaxed trunk to avoid compensating positions. If the patient has difficulty standing then they can be imaged in a semi-sitting position to maintain the effect of gravity on the curves.

If surgery is being considered, then a full length posteroanterior film is often taken of the patient side bending to the right and left. This assesses curve flexibility.

The magnitude of a scoliotic curve is determined by the Cobb angle. To measure the Cobb angle first identify the "end vertebra" which are the top and bottom-most vertebral bodies in the curve.

In smaller curves the angle may be too small to allow intersection using the above method. In that situation extend the lines a short distance, then draw perpendicular lines from each line towards the other line. The angle that forms from the intersection of the perpendiculars is the Cobb angle.

Alignment is measured in both the coronal and sagittal planes using a plumb line starting at the base of C7. This needs to be performed on erect full-length spine radiographs without lateral bending 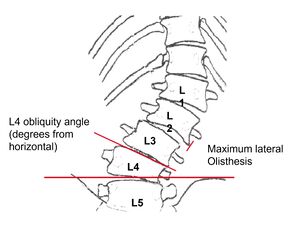 Figure 6: Illustration of a well seated L5 vertebral body as the intercristal line bisects the curve above the L4/5 disc space, the obliquity of the L3 and L4 bodies from the horizontal, and the lateral olisthesis between two adjacent lumbar vertebrae that can occur in adult scoliosis.

A low interiliac line, where the line falls below the fourth lumbar disc space, is referred to as a poorly seated L5. In this setting there is a high percentage of apical vertebral rotation in combination with lateral translatory vertebral body shifts (olisthesis) at the lower end of the curve.[5] This pattern be a risk factor for the development of annular tears. See figure 6.

The Risser sign isn't perfect. It correlates differently in boys and girls with skeletal maturity, and typically appears after the peak height velocity. Grade 5 may not match the completion of vertebral growth. Also stage 0 and stage 5 appear similar.

If there are doubts regarding skeletal maturity then request a bone age x-ray of the left hand and wrist. The scoring of the metacarpals and phalanges are more closely related to scoliosis progression than Tanner stage and Risser sign. Assessment of elbow maturation is another method and is more accurate than hand maturation.[6]

Whole spine radiographs are equivalent to 100 chest x-rays and there is an increased risk of death from breast cancer compared to the general population. The following precautions should be taken

MRI is warranted if there is a suspicion of an underlying disease such as in the presence of a left thoracic curve or abnormal neurological findings. MRI can identify pathology such as tumours, syrinx, and Chiari malformations.

King (1983)[7] and Lenke (2001)[8] are other classification systems. Both of these classification schemes use the Cobb angles (see figure 2). There is a problem with reliability of grading systems, but Lenke is thought to have better reliability and reproducibility.[9]

The Lenke system uses the vertebral level and number of curves to classify the scoliosis into six major types. It is a very complex system and the learner is encouraged to read through the original publication.

Compensatory minor curves help to correct the asymmetry that is created by the primary curve. The caudal lumbar spine is the last resort of the spinal column to provide for compensatory correction. Lumbar deformity is important in determining overall spinal balance and impacts on the success of surgical correction. This is what the "lumbar spine modifier" refers to in Lenke's system.

There are three lumbar spine modifiers classified as A, B, and C. These depend on the relationship of the central sacral vertebral line (CSVL) to the apex of the lumbar spine (see figure 3). The stable vertebra is the most proximal lower thoracic or lumbar vertebra in the curve most closely bisected by the CSVL. If a disc is most closely bisected then choose the next caudad vertebra as the stable one. Trunk shift is the distance between the C7 plumb line and the CSVL.

The main downside to using the Cobb angle for classification is that it neglects the fact that scoliosis is a 3-dimensional deformity, not simply coronal. It includes sagittal and rotational abnormalities. The Lenke classification therefore adds a descriptor of the thoracic sagittal profile between T5 and T12. They are subdivided on the basis of an assumed normal value called N (20 – 40o). Three types are described: hypokyphosis [- (<10o)], normal [N (10 – 40o)] and hyperkyphosis [+ (>40o)].

In a series of 606 patients with idiopathic adolescent scoliosis, the five most common curve types are 1AN, 1BN, 2AN, 5CN, and 1CN.[10]

The initial longitudinal research, published in 1968, painted a grim picture outlining high rates of progression of the deformity, the development of severe disabling back pain, and cardiopulmonary dysfunction. This research while initially influential, has long since thought to be highly flawed. They did not differentiate between idiopathic scoliosis and other forms (e.g. congenital, neuromuscular, etc), there were many cases lost to follow up, there was no control group, the numbers were small and findings were statistically insignificant, and the outcome measures were all based on questionnaires rather than objective assessment.[11][12]

The long term health consequences of adolescent idiopathic scoliosis was evaluated in a 50 year follow up study of 117 untreated patients with adolescent idiopathic scoliosis and compared them to controls. The authors found that while there was an increased risk of back pain (61% vs 35% in controls), there was no increased rate of mortality, nor any increased rate of cardiac or pulmonary disease. However in those with thoracic curves of more than 100° there was an increased risk of death from right heart failure.[14]

There is a slightly greater incidence of back pain in those with thoracolumbar or lumbar curves, especially those with translatory shifts at the lower end of the curve.[14][15] Translatory shifts on radiographs have been correlated with backache and with radicular thigh pain.[16] In this setting, the apical vertebral rotation leads to hypertrophy and subluxation of the facet joints in the concavity of the lumbar curve. This can narrow the neural foramen between the adjacent pedicles leading to nerve root irritation. Radicular anterior thigh pain tends to occur on the side of the concavity of the major curve and indicates compression of L2, L3, or L4 nerve roots. Radicular buttock and lower limb pain tends to occur on the side of the convexity of the curve implicating compression of L5 and S1 nerve roots.

There are often negative psychological effects with scoliosis, but these are better tolerated by middle-aged patients than teenagers.[17] Adolescents may be particularly unhappy about rib prominence. There is no correlation between psychological distress and the location and magnitude of curvature. [18]

The determinants of progression are the age and sex of the individual, the stage of pubertal development, the growth potential, the curve pattern and grade at the time of diagnosis.

Standard management options include observation, bracing, and surgery. Considerations include skeletal maturity and the grade of the curve. Generally patients are referred to a specialist clinic.

Management According to Skeletal Maturity

Bracing is a controversial treatment modality, with divergent practices across specialist clinics. The results from research has been mixed. Bracing has been found to cause significant psychological distress unless the patient is well supported by the family.[22]

There is no scientific evidence that any form of manual therapy, manipulation, electrical stimulation, or corrective exercises can slow or stop the progression of scoliosis. There are a variety of scoliosis physical therapy philosophies around the world.

The goal of surgery is prevention of curve progression and correction of the deformity. It usually involves curve correction and spinal instrumentation and fusion. The lower lumbar motion segments tend to be left unfused.

The case for surgical correction amounts to theoretically reducing the chance of future consequences of curve progression, however this assumption has not been properly tested and there are a lack of high quality controlled trials. The majority of published literature on scoliosis has been generated by surgeons, and the likely bias implicit in this should be kept in mind.