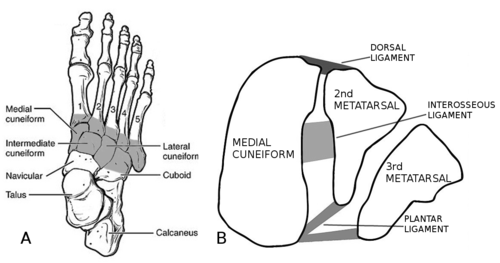 A, dorsal view of the bones of the foot, with the shaded area showing the relationship between the metatarsals and the tarsal bones forming the TMT joint complex. The 1st to 3rd metatarsals are associated with the respective three cuneiforms, while the 4th and 5th metatarsals articulate with the cuboid.
B, Cross section showing the Lisfranc ligament in relation to the medial cuneiform, 2nd metatarsal and 3rd metatarsal. The Lisfranc ligament consists of three distinct ligaments: the dorsal ligament, interosseous ligament and plantar ligament, with increasing respective strength [1].
Image modified from an image by OpenStax College, distributed under a CC 2.0 license. Right image modified from an image by Mikael Haggstrom, distributed under a CC 2.0 License

The base of the second metatarsal is recessed into the midfoot, and forms a key-like configuration with the intermediate cuneiform. The rigid second metatarsal (and also so some degree the third) provides a central rigid structure to the longitudinal arch, allowing a rigid lever for push-off in late stance.

The Lisfranc ligament has an integral role in providing midfoot stability. It attaches from the medial cuneiform to the base of the 2nd metatarsal with its three segments. The TMJ joint complex is intrinsically stable because of the arch-like configuration which is best seen in cross-section.

The most medial and lateral tarsometatarsal joints are flexible and allow the forefoot to invert and evert independently of the hindfoot.

With the action of peroneus longus, and plantarflexion of the first MTPJ to 10°, a "pronator twist" of the forefoot is produced. The medial foot moves plantarward, and the entire surface of the foot faces more laterally. Likewise, when the ground reaction force of an uneven terrain pushes the medial forefoot is a dorsal direction, a "supinator twist" is produced.

The pronator and supinator twists allows accomodation to variable terrain and also provides sufficient push-off from the medial border of the foot.