Myositis is a group of rare autoimmune diseases that cause inflammation of the skeletal muscles. Myositis can be difficult to diagnose due to its varied and sometimes nonspecific symptoms.

Polymyalgia rheumatica and fibromyalgia are distinct to myositis in that they are not muscle diseases as such and muscle pain rather than true weakness is their predominant symptom. should not be confused with the IIMs despite their nomenclature.

The incidence is approximately 1-6 per 100,000. There is a 2:1 female to male prevalence. Myositis can occur in all ages. In 20% there is an association with other autoimmune diseases, called overlap myositis, especially RA, SLE, and MCTD. In the elderly, dermatomyositis and polymyositis are often paraneoplastic, and symptoms can occur before tumour detection. 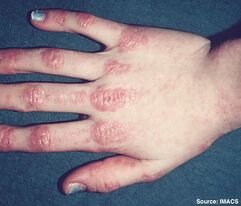 This is the easiest subtype to diagnose due to the skin manifestations. Gottron's papules are found over the dorsal aspects of the MCPJs and PIPJs and even over the DIPJs. These can be itchy. The patient may have a very photosensitive V-neck distribution rash, very similar to lupus.

The muscle weakness pattern is proximal. including the neck, arm abductors, and hip flexors. On muscle biopsy there is peri-fascicular atrophy.

This was first described in 2010. These patients have the same pattern of weakness as dermatomyositis. However on biopsy there is necrosis of the muscle fibres. The myofibres are different in size which indicates a true intrinsic myopathic process. With treatment the fibres regenerate.

The important question is whether they have had statin exposure which has a strong link to autoimmune necrotising myositis. It is an extremely rare adverse event.

This is a diagnosis of exclusion. On biopsy you should see primary inflammation , i.e. inflammatory cells invading the muscle fibres.

The polymyositis category is controversial as to whether it actually exists as many of these patients evolve to develop more typical features of another subtype or actually have a genetic neuromuscular disease such as facioscapulohumeral dystrophy or limb girdle muscular dystrophy.

Inclusion body myositis (IBM) is a chronic, inflammatory myopathy that primarily affects older adults, particularly men. The condition is characterized by proximal muscle weakness and the presence of inflammatory cells surrounding and invading myofibres and rimmed vacuoles on biopsy. IBM typically presents with asymmetric weakness of the proximal and distal limbs. Initial symptoms are often difficulty climbing stairs and rising from a seated position. In advanced cases, dysphagia and respiratory muscle weakness may also be observed.

The pathogenesis of IBM is not fully understood, but it is thought to be autoimmune. Overall, the prognosis for patients with IBM is poor, by 15 years most patients require assistance with basic daily activities.

Unfortunately the term IBM also stands for an unrelated category of diseases called the inclusion body myopathies. The myopathies are inherited muscle disorders (h-IBM), while the other type are autoimmune. The two different "IBMs" only have superficial resemblence.

While there are four main subtypes of myositis, some clinicians consider antisynthetase to be a distinct entity. The classic triad is myositis, interstitial lung disease, plus polyarthritis - along with positive antibodies. Other clinical features include "Mechanic's hands," fever, and Raynaud phenomenon.

The most important aspects for evaluation are:

Other than assessment of limb strength, it is also important to assess neck flexor strength. Put the patient in the supine position and test neck flexion strength against resistance. This muscle group is often the first affected. For the limbs the classic pattern is arm abduction and hip flexion weakness. 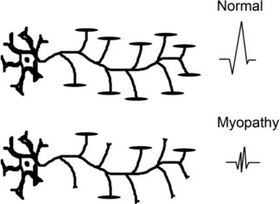 Figure 2. In myopathies the disease affects the muscle fibers within the motor unit. As the motor neurons and axons are unaffected each motor unit actional potential (MUAP) leads to activation of less muscles fibres. This is seen by an increase in polyphasic activity, a decrease in duration, and a decrease in amplitude. From Paganonii et al.[2]

In myopathies, there is a drop-out of individual muscle fibres. Motor neurons and axons are not affected. In myopathies each motor unit action potential (MUAP) is generated by fewer motor fibres.

Therefore with EMG you see polyphasic, shorter duration, and low amplitude results. This is how you determine that it is an intrinsic muscle process. ALS on the other hand will have normal EMG. In comparison, nerve conduction studies will be abnormal in ALS but normal in myopathies.

On T2 weighted images and STIR you see increased oedema signal. This doesn't diagnose myositis as such but it can tell you which muscle is involved and it can be helpful in planning muscle biopsy to get the best biopsy specimen. This is important because in myositis the inflammation can be patchy and so muscle guided biopsy probably reduces the chance of false negatives.

In chronic cases, such as in untreated myositis or in genetic muscular dystrophies where there is no effective treatment, there is increased signal on T1 indicating fatty atrophy and irreversible damage.

Muscle biopsies can provide valuable diagnostic information in patients with suspected autoimmune muscle disease. Bohan and Peter identified several features that are commonly associated with autoimmune myopathies, including degenerating and/or necrotic myofibers, regenerating muscle fibers, atrophic muscle cells, and evidence of inflammatory exudates. However, these features are not specific to autoimmune myopathies and can also be found in other conditions such as IBM and inflammatory muscular dystrophies.

Since Bohan and Peter published their classification scheme, researchers have identified unique pathological features in biopsies from patients with dermatomyositis, polymyositis, and IMNM. These features suggest that different underlying mechanisms are at play in each of these diseases. For example, evidence of atrophic, degenerating or regenerating fibers within the perifascicular area is considered pathognomonic for dermatomyositis. In contrast, biopsies from patients with polymyositis are characterized by the presence of cytotoxic T cells surrounding and invading non-necrotic myofibers. Biopsies from patients with IMNM typically show marked myofiber necrosis, degeneration and regeneration, with few, if any, inflammatory cells.[1]

The presence of myositis-specific autoantibodies (MSAs) can help differentiate between immune-mediated and non-immune-mediated muscle diseases. However, it is important to consider alternative diagnoses when specific features of dermatomyositis, polymyositis, or IMNM are absent, and to take into account features that are characteristic of other muscle diseases.

Glucocorticoids are started initially at 1mg/kg for prednisone. Either at the same time or soon afterwards another agent is started. The agents usually used are methotrexate, azathioprine, or mycophenolate. There are no studies comparing agents. Combination therapy is common. Other options include IVIG and rituximab.