This article describes some important concepts for the safe and effective use of spinal needles during fluoroscopic procedures.

Good needle handling skills are a necessary skill, but aren't sufficient in themselves in allowing a safe and effective procedure. 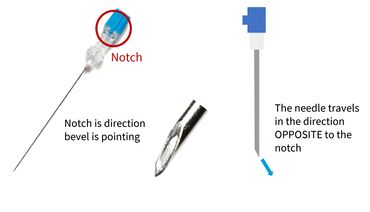 Turn the notch OPPOSITE the direction you want to go.

When the needle is advanced in an axial direction, the needle tip deflects and arcs away from the notch and bevel.

There is greater deflection with smaller gauge needles. Once you reach 18-20g there is little deflection. The most commonly used needle size for lumbar fluoroscopy procedures is 23g. 25g is another option which allows for greater deflection but is more difficult to control accurately.

Touhy needles are side facing bevelled needles that are generally used for interlaminar injections where the loss of resistance technique is used. Again with these needles the bevel and notch are coincident. With this type of needle deflection occurs towards the notch and bevel due to the rounded shape of its tip. However this is less relevant because the needle size used is typically larger around 18-20g.

The two variables with bending the needle. Increasing either will increase needle deflection.

Some operators choose to add a bend to their needles to enhance the amount of deflection that occurs to allow for finer control of tip positioning. The bend is always made so that it is coincident with the bevel. So with the bevel pointing up the tip will be bent to be angled downwards.

There are two variables at play with the choice of needle bends. One is the angle of the bend, and the second is the distance that the bend is made from the tip. Increasing either of these variables will increase the needle arc. A typical angle is 5 to 10 degrees and a typical length is 0.5-1cm.

Another outcome of bending the needle will be that when the needle is rotated it will rotate around a cone. This can help with positioning but extreme care should be taken with rotation around neural tissue lest it is severed. Another downside is that the needle direction may require more frequent adjustment compared to a straight needle.

Counter bending is a technique to increase the amount of deflection while the needle is in situ. It is an essential skill with flexible needles, especially 25g needles.

The needle is generally held at the junction to the skin while it is in situ and then flexed in the direction that the operator desires the tip to move. This increases the arc of deflection.

The amount of deflection that occurs also depends on the density of tissue that the needle sits in. Fat has the lowest density, muscle has intermediate density, and fibrous tissue has the highest density. With increasing tissue density there is increasing amount of needle deflection.

Fibrous tissue becomes very important when crossing fascial lines and scar tissue. The needle can even become fixed in fibrous tissue reducing the potential for adjustment. An example is the lumbosacral fascia. When the needle is pierced through this structure the needle position can only be slightly adjusted.

If the needle position is far from optimal then the operator should withdraw the needle until it is superficial to the fascial plane, redirect the needle, and then re-insert at a new angle. Sometimes the needle can be stuck in deeper fascial planes.