Opioids are an analgesic, but have fell out of favour in the treatment of chronic pain in New Zealand. They currently only have a role in acute pain and chronic cancer related pain. Before the onset of tolerance, opioids exert their analgesic effects through peripheral, spinal, and supraspinal sites.

Opiate: any compound that is structurally related to products found in opium. Opiates include the natural plant alkaloids such as morphine and codeine.

Opioid: any agent regardless of its structure that has the functional and pharmacological properties of an opiate.

Narcotic: Originally referred to any drug that induced narcosis or sleep, now associated with opioids often used in a legal context to refer to a variety of substances that have an abuse or addictive potential. 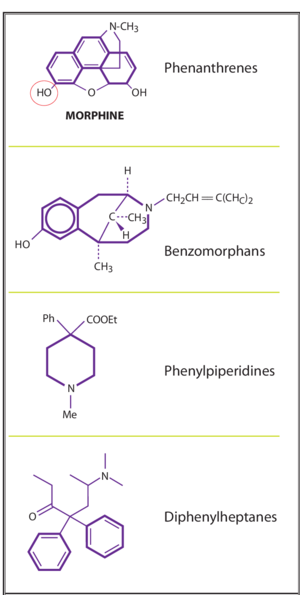 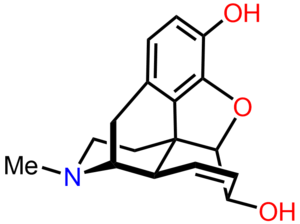 Morphine is the archetypal opioid and is the reference standard against for other opioids. It has a benzene ring with a phenolic hydroxyl group at position 3, as well as an alcohol hydroxyl groups at position 6 and at the nitrogen atom. Both of the position 3 and 6 hydroxyl groups can be converted to ethers or esters forming other compounds. The nitrogen group is in a tertiary form and this is important to its analgesic properties.

Tramadol doesn't fit into the above classes. It is an atypical opioid with partial mu agonist activity and central CABA, catecholamine, and serotonergic activities.

There are four known distinct families of endogenous opioid peptides, the most studied of which are the enkephalins, endorphins, and dynorphins. They function as neurotransmitters in the pleasure-reward and pain pathways, and may have a role with hormone secretion, thermoregulation, and cardiovascular control.

There are three main types of opioid receptors: μ (MOP), δ (DOP), and κ (KOP). They belong to the rhodopsin family of GPCRs. The natural ligands interact with each receptor but don't do so exclusively. These are the endomorphins and β-Endorphin (μ), enkephalins (δ), and dynorphins (κ).

All receptors have analgesic effects, but most opioids with clinical relevance have primary agonist activity on μ (mu) receptors, and so are termed μ agonists. With increasing dose, analgesia theoretically occurs in a log linear fashion. While opioid agonists/antagonists and partial agonists have a ceiling effect.

Opioid receptors are found within the CNS as well as in peripheral tissues.

Opioids block the release of GABA from presynaptic inhibitory inter-neurons in these descending pain pathways. This leads to the activation of monoamine-containing descending neurons that supress nociceptive transmission in the dorsal horn. A reduction in GABA is also accompanied by release of dopamine leading to opioid addiction in some individuals.

Opioids can also antagonise NDMA receptors, thereby activating the descending serotonin and noradrenaline pain pathways. NMDA receptors are thought to be involved in neuropathic pain and the development of tolerance.[4]

They are also found on presynaptic afferent fibres, interneurons, and postsynaptic projection neurons. In the spinal cord they are found in the dorsal horn, primarily in laminae I and II.

Fentanyl is metabolised in the liver to inactive metabolites. It is a useful Strong opioid in renal failure with stable pain. Fentanyl is available in patches.

There is variable time of onset and analgesic efficacy. They are reasonably well tolerated in adjusted dosing. Ramifentanyl has no hepatic metabolism. Fentanyl patches are a good choice.

Polymorphism in human OPRM1 gene which encodes the mu opoid receptor might contribute to variation in sensitivity.

Many of the long term effects come about from long term use. The evidence is clear that long term opioid use is not indicated in chronic non-malignant pain.

Long term use of opioids is associated with tolerance and opioid induced hyperalgesia. There is activation of pain facilitatory systems from the medulla that opposes the analgesic action, a "physiological antagonist of analgesia". With the activation of descending pain facilitatory pathways there can also be the induction of a paradoxical hyperalgesic state. This is termed opioid induced hyperalgesia. If unrecognised it can lead to ever increasing doses of opioids.