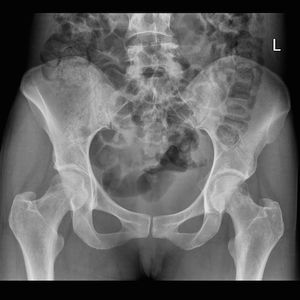 A pelvis x-ray, also known as a pelvis series or pelvis radiograph, is a single x-ray of the pelvis to include the iliac crests and pubic symphysis. It allows assessment of general pelvic pathology, the sacrum, some of the lower lumbar vertebra and the proximal femora. The pelvis series is comprised of an anteroposterior (AP) with additional projections based on indications and pathology. 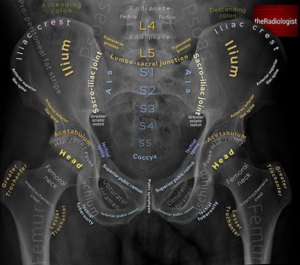 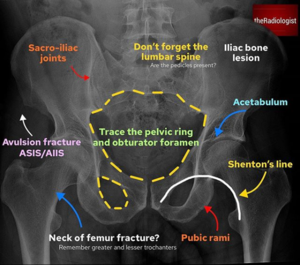 End by zooming out for an overview, and focus especially on the iliac bones which is a commonly missed area for pathology

Intracapsular
fracture site within the joint capsule, subcapital (most common), transcervical, or basicervical. High risk of disruption of the blood supply to the femoral head. Displaced intracapsular fractures are associated with delayed union, non-union, or avascular necrosis

Extracapsular
fracture line distal to the attachment of the femoroacetabular joint capsule. Intertrochanteric (most common) or subtrochanteric

Part or all of this article or section is derived from Pelvic radiograph (an approach) by Dr Francis Deng and Dr Jeremy Jones et al., used under CC BY-NC-SA 3.0