The popliteus may be affected by tenosynovitis, acute calcific tendonitis, rupture, and avulsion. Popliteus tendinopathy is rare but often misdiagnosed. Pain may arise from the muscle belly, its tendon, or the popliteus-arcuate ligament complex. Popliteus injuries are commonly seen in combination with injuries to the lateral meniscus and posterior cruciate ligament. Isolated popliteus pathology is less common. Posterior lateral instability may be present.

The popliteus muscle has up to three origins - the lateral femoral condyle (just anterior and inferior to the lateral collateral ligament), the fibula head, and in some people also the posterior horn of the lateral meniscus. It inserts into the posterior surface of the proximal tibia proximal to the soleal line.

It is supplied by the tibial nerve (L5 and S1) and popliteal artery.

3 have suggested that overuse or fatigue of the quadriceps may lead to inflammation of the popliteus. When the fatigued quadriceps cannot adequately resist forward displacement of the femur on the tibia, undue stress occurs on the secondary restraints, overwhelming the relatively small popliteus muscle.

With popliteus tendinopathy there is usually a gradual onset of symptoms. Pain typically occurs during activity or the following day. Rupture is rare but in that situation there may be an acute knee injury. The patient is usually able to run a short distance, but with longer distances they develop posterolateral knee pain. They may tell you the pain is in the back of the knee, but they will generally point to the posterolateral region. The patient may report some instability and comment that it difficult to bend their knee.

The main finding is localised tenderness over the proximal aspect of the popliteus tendon. The area of tenderness may be at the femoral origin or posterior to the fibular collateral ligament. For palpation position the patient prone with the knee flexed or sitting up with the leg crossed. Start near the posterolateral corner medial to the biceps femoris tendon, and then palpate along the joint line. Palpate over the course of the popliteus and its tendon. Also palpate over the hamstring tendons and gastrocnemius origin. Asking the patient to contract their muscles can aid in palpation. There may be limitations in knee flexion and extension range of motion. End range may cause pain.

There are two special tests where provocation of pain are positive tests.

Calcific changes may be apparent on plan x-ray. MRI may show tendinopathic changes and tenosynovitis. 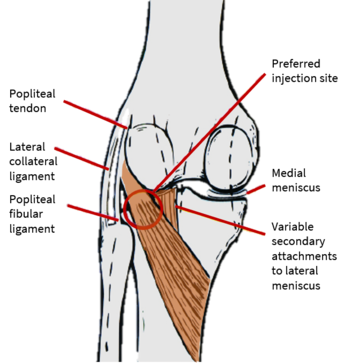 Preferred injection site in the region of maximal tenderness.
Modified from illustration by Mary Albury-Noyes

The popliteus is a dynamic stabiliser of the knee and prevents posterior tibial translation. Excessive quadriceps fatigue, another dynamic stabiliser, results in strain of the popliteus. Physical therapy is targeted at eccentric strengthening of the quadriceps to reduce strain on the popliteus. The rehabilitation program should also include strengthening of the tibial rotators and hamstring muscles.

NSAIDs may be used to help with pain durijng rehabilitation

Anecdotally the condition responds well to corticosteroid injection. A typical dose is 10mg triamcinolone injected into the area of maximal tenderness. Ultrasound can be used for increased accuracy and reducing the risk of peroneal nerve injury. Adding local anaesthetic to the injectate can be helpful diagnostically in terms of whether there is immediate relief of pain. However in one cadaver study the 3mL of injectate often overflowed into the knee joint through the popliteus hiatus.[1] Smaller volumes may theoretically reduce the chance of overflow if diagnostic specificity is very important.