Prognosis of Low Back Pain

It is sometimes stated in guidelines that most patients with acute low back pain make an excellent recovery. The evidence is in fact quite conflicting, with markedly different findings across different studies. Overall the treating doctor can relay optimism, but be guarded about prognosis.

Importantly, recurrences can occur after recovery. Again the literature has shown different rates for recurrence.

Another Australian study of 1334 patients found recurrences of 24% for "12-month recall" and 33% for "pain at follow-up" definitions of recurrence.[4]

A particular note should be made about older adults, where the prognosis tends to be worse. For example, in a US cohort study of 4,665 patients who had a new primary care visit for back pain, only 16% had complete resolution of their back pain and disability by two years. Average pain intensity reduced slightly from 5.0 to 3.7 at 3 months, and then stayed relatively static to 24 months, with around half having a clinically meaningful improvement in disability and pain. Baseline characteristics are more important predictors such as female gender, higher BMI, chronic back pain, higher disability, and negative expectations for recovery.[5]

Prognostic risk factors are broadly categorised into biological and psychosocial. An important limitation of epidemiological studies assessing this area is that only factors asked about in a questionnaire can be considered. For example, if a study only uses assessment methods looking at psychosocial factors, they won't find any biological factors. Factors that appear significant when amongst a small list of possibilities may not be significant if it is diluted in a longer list of possibilities. The most reliable studies are those that consider an initial large number of possible factors and then undertake multiple regression analyses to eliminate spurious factors.[9]

Following the above analysis, investigators should determine how much of the variation between patients is accounted for by the significant factor. Unfortunately this is not typically done in back pain research. Very often the researchers will take a factor found to be significant, ignoring that is may only account for a small proportion of the variance amongst patients, and incorrectly conclude that it is important. In other words, many of the reported risk factors only account for a small proportion of patients.[9]

Therefore, predictors of recurrence are often variable across studies. The psychosocial category are the strongest and potentially remediable factors. The risk factors generally include

It is difficult to predict who will have a recurrence after recovery. Number of previous episodes may be the only predictor.[4] 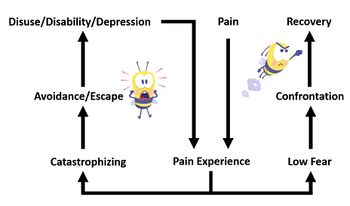 Note in table 1 how there is a clustering of important remediable risk factors in psychosocial category. These are indeed important predictors of chronicity. However none alone are the predominant factor, with each only accounting for a small proportion of the variance. They are not major determinants of chronicity unless several are present simultaneously. This is likely why therapies targeted at psychological factors have been disappointing.[9]

The fear avoidance model views a patients disability as a function not only of their pain but of their response to their pain. The psychological aspect of avoidance behaviour is based on the patient's experience, memory, cognitions (reasoned thoughts which may or may not be true), and beliefs (less rational thoughts related to emotions).

Some cognitions may be harmful, such as believing that bed rest is beneficial. Cognitive patterns can be reinforced if avoidance is rewarded by attention, resulting in illness behaviour. Fear is a belief. Patients may believe that pain is a sign that they will end up in a catastrophe. Beliefs can be influenced by past history of pain, previous stressful events, and personality .

Confronters view their pain as a temporary nuisance. They are motivated to return to activity, and are keen to manage their pain and get on with things. Avoiders avoid the painful activities altogether. Avoidance is counterproductive as it doesn't reduce pain, and even worse, exposure actually increases tolerance. Furthermore it only serves to reduce physical and social functioning. Fear avoidance beliefs account for around a quarter of the variance of disability. The take away from this is that with movement despite pain is helpful in recovery, generally in the form of graded exposure.[9]