Sagittal band injuries (also known as Boxer's knuckle, not to be confused with Boxer's fracture) results from acute direct trauma or chronic, repetitive microtrauma, and typically occur in boxers. 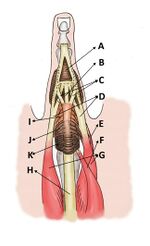 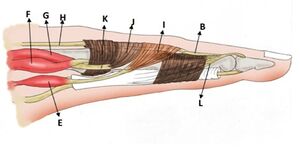 The most frequent location of this injury is the third finger. The site of the tear may affect whether the extensor tendon is displaced towards the radial or ulnar side. Although the most frequent site of disruption is the radial sagittal band, such that the extensor tendon dislocates in an ulnar direction, radial subluxation can occur with forced valgus injury. Since the second and fifth fingers have two tendons per finger, they may displace in different directions, one to the radial side and the other to the ulnar side.[2]

History is often of the patient punching an object with a clenched fist. Less often it can occur in non-traumatic situations such as in Rheumatoid Arthritis.

On examination the finger may lie in a ulnar or radial deviated position. Acutely there may be swelling. The sagittal band prevents deviation of the extensor tendon during MCPJ flexion and bowstringing during hyperextension. Therefore extensor tendon dislocation can be observed during flexion.[2]

Normal: US depicts the normal sagittal bands as thin hyperechoic bands that join the extensor tendons at the MCP joint level. The central slip can be seen up to its insertion into the middle phalangeal base in the dorsal aspect. More distally, US depicts the lateral slips as thin, flattened, hyperechoic structures close to the phalangeal cortex. Since it is difficult to accurately assess the dorsal aspect of the interphalangeal (IP) joints in the transverse plane, US of joints is mainly performed in the longitudinal plane. In longitudinal US, the central slip is seen as a hyperechoic structure running through the subcutaneous soft tissue over the echogenic bony cortex, whereas the two lateral slips are hardly visible.

Sagittal tears: In tears ultrasound demonstrates irregular thickening of the abnormal sagittal band with hypoechogenicity. The extensor tendon can appear normal or can become swollen with loss of the fibrillar pattern, suggestive of a partial tear. On dynamic examination, the extensor tendon can be subluxed or dislocated during finger flexion in the transverse plane.[2]

The ruptured sagittal band can often be repaired e.g. with mattress sutures.

Part or all of this article or section is derived from Current status of ultrasonography of the finger by Seun Ah Lee et al, used under CC-BY-NC