The shoulder girdle links the upper extremity to the trunk. Working with the elbow, it allows the hand to be positioned in space. It needs a high level of structural protection and functional control. The biomechanics of the shoulder are quite complex. Movement involves a complex interaction of static and dynamic stabilisers and free and coordinated motion between all four joints.

The shoulder complex (shoulder girdle) consists of four joints: glenohumeral (GHJ), acromioclavicular (ACJ), sternoclavicular (SCJ), scapulothoracic joint (STJ). Some individuals also have a coracoclavicular joint (CCJ). These joints need to have free motion and coordinated action, and motion occurs in all of them with any significant arm movement. 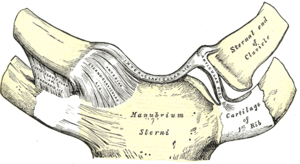 The sternoclavicular joint and stabilising structures.

The SCJ is formed by the articulations of the proximal clavicle with the clavicular notch of the manubrium and with the cartilage of the first rib. It is a saddle shaped joint with a fibrocartilaginous disc.

The SCJ provides the major axis of rotation for motion of the clavicle and scapula. The clavicle is able to move in three degrees of freedom.

The close-packed position is with maximal shoulder elevation. 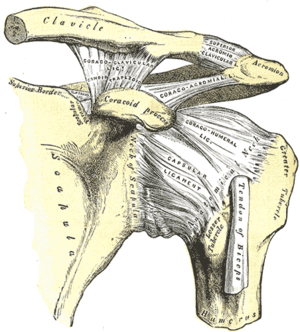 The ACJ if formed by the articulation of the acromion process of the scapula with the distal clavicle. It is an irregular diarthrodial joint and frequently has a fibrocartilaginous disc. Stability is provided by the coracoclavicular ligaments. There are many variations of the ACJ.

It is able to move in all three planes. Rotation occurs at the ACJ during arm elevation. The close-packed position is with abduction of the humerus to 90 degrees.

This is an anomalous joint formed at the junction of the coracoid process of the scapula and the inferior surface of the clavicle. They are connected by the coracoclavicular ligament. The prevalence is approximately 10%. Some texts describe this structure as normally being a syndesmosis that doesn't permit much movement. 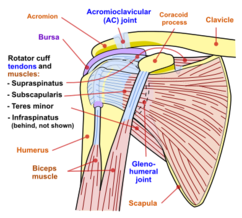 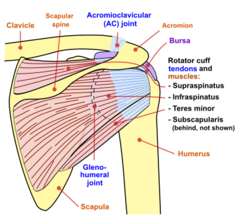 The GHJ is the synovial ball-and-socket articulation between the humeral head and the glenoid fossa of the scapula. The GHJ is the most dynamic and mobile joint in the body.

The head of the GHJ is almost hemispherical and only 25-30% of the surface is in contact with the glenoid fossa. The glenoid fossa also has a less curved shape compared to the humeral head, and this allows for sliding movements. 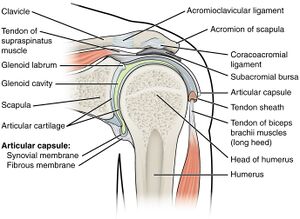 Coronal section of the shoulder showing some of the features described in the text.

The shoulder joint is reliant on ligamentous and muscular structures for stability. Stability is provided by static and dynamic components. These components restrain the humeral head and keep it in the glenoid fossa. The close-packed position is with the humerus abducted and externally rotated.

The passive static stabilisers include the articular surface, glenoid labrum, joint capsule, and ligaments. The articular cartilage is thicker peripherally and the joint is fully sealed providing negative pressure to resist dislocation at low forces.

The glenoid labrum is a dense fibrous and fibrocartilagenous tissue that encircles the glenoid fossa. It receives support from the surrounding glenohumeral ligaments and biceps brachii tendon. It is triangular in cross-section. The function is to deepen the fossa and add stability to the joint. The contact area is increased to 75% and the concavity is increased by 5mm to a total of 9mm. 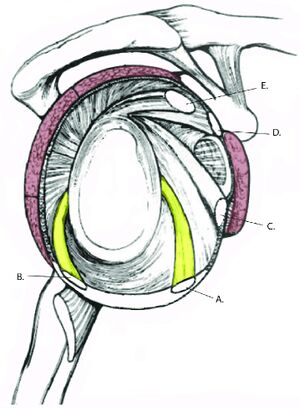 The ligaments are also part of the static stabilisers.

Dynamic stabilisation mainly occurs in mid-range. It is provided by the muscles that contract in a coordinated manner to pull the humeral head towards 1-2mm of the centre of the glenoid fossa. Prior to motion of the humerus, tension is developed in the rotator cuff and biceps tendons, increasing stability. With asymmetric contraction, the humeral head can be moved to the desired position. They also rotate and depress the humeral head during arm elevation keeping it in position.

The long head of biceps brachii restrains anterior and superior humeral head translation. Deltoid and other scapulothoracic muscles position the scapula in a position to maximise stability of the GHJ.

Anterior shoulder joint: support is provided by the capsule, glenoid labrum, glenohumeral ligaments, capsular reinforcements, coracohumera ligament, subscapularis fibres, and pectoralis major. The muscles merge with the joint capsule. The coracohumeral and the middle glenohumeral ligaments support and hold up the relaxed arm; and support the arm through abduction, external rotation, and extension.

Posterior shoulder joint: support is provided by the capsule, glenoid labrum, and muscle fibres of teres minor and infraspinatus. The muscles also blend with the capsule.

Superior shoulder joint: support is provided by the glenoid labrum, coracohumeral ligament, overlying muscles. Supraspinatus and long head of biceps brachii reinforce the capsule. Overlying the supraspinatus is the subacromial bursa and coracoacromial ligament forming an arch underneath the ACJ.

Inferior shoulder joint: has minimal reinforcement by the capsule and long head of triceps brachii.

The STJ refers to the region between the anterior scapula and the thoracic wall. It is not a bone to bone connection but rather a physiologic joint. The scapula rests on the serratus anterior and subscapularis.

The STJ has two major functions

Seventeen muscles attach to or originate from the scapula. They include the levator scapula, trapezius, rhomboids, serratus anterior, pectoralis minor, and subclavius. They provide the following functions:

The scapula moves along the thorax due to ACJ and SCJ movements. The total range of motion of the STJ is approximately 60° of motion for 180° of arm abduction or flexion. About 65% of this range occurs at the SCJ, and 35% at the ACJ. The clavicle functions as a crank on the scapula as it elevates and rotates to elevate the scapula.

The scapula has the following movements:

The position of the clavicle also plays a role in scapula movement. The SCJ movements are opposite to the ACJ movements for elevation, depression, protraction, and retraction; but not for rotation. E.g. with elevation at the ACJ, there is depression at the SCJ. 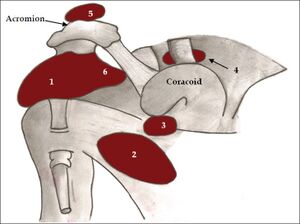 There are several bursae that reduce friction between layers of tissue and these include the subscapularis, subcoracoid, and subacromial bursae. The most well known, the subacromial bursa, sits in the subacromial space between the acromion and the coracoacromial ligament above and the glenohumeral joint below. It cushions the supraspinatus from the overlying acromion. The subscapularis and subcoracoid bursae are sometimes merged. They reduce friction of the superficial fibres of subscapularis against the neck of the scapula, the head of the humerus, and the coracoid process.

Movements of the Shoulder Complex

The shoulder can move in the following ranges:

Most commonly motion of the humerus involves some motion of all shoulder joints. However some amount of GHJ motion can occur while the others are stabilised. The scapulohumeral rhythm refers to the coordination of scapular and humeral movements with the four joints of the shoulder complex all working together. This rhythm allows a greater range of motion at the shoulder than if the scapula was a fixed structure.

In the the early stages of abduction or flexion, the movement is primarily at the GHJ. However there are also stabilising motions of the scapula.

There are contributing movements of the ACJ (20°), sternoclavicular joint (40°), and posterior clavicular rotation (40°). During the first 90° of arm elevation (in all planes), the clavicle is also elevated at the SCJ, and rotation occurs at the ACJ.

At 90° of abduction, the greater tuberosity approximates the acromion process with soft tissue compression limiting further abduction. With external rotation of the arm, 30° further abduction can occur because the greater tuberosity is moved out from the coracoacromial arch. On the other hand, if the arm is internally rotated, there is only 60°of abduction. Therefore external rotation occurs with abduction to about 160°. Full range of abduction requires some extension of the upper trunk

The muscles that contribute to abduction and flexion are similar.

The deltoid contributes 50% of the muscular force with abduction or flexion (i.e. elevation). With increased abduction there is greater contribution from the deltoid and it is most active from 90-180°. Deltoid and supraspinatus are active throughout the range of arm elevation, but supraspinatus has a larger role in initiating abduction.

The deltoid cannot abduct or flex the arm without humeral head stabilisation from the rotator cuff. The rotator cuff contributes about 50% of the forces for abduction and flexion. With flexion stability is provided by supraspinatus, infraspinatus and latissimus dorsi. With pure abduction there is similar activity but subscapularis provides stabilisation through eccentric contraction.

In early abduction or flexion, the deltoid is oriented vertically. Supraspinatus assists deltoid and compresses the humeral head to stop it translating superiorly from deltoid action. The rotator cuff muscles as a group all contract and compress the humeral head into the glenoid fossa. The teres minor, infraspinatus, and subscapularis pull the humerus down which stabilises it in elevation. Latissimus dorsi also eccentrically contracts with elevation.

Above 90° of flexion or abduction there is reduced rotator cuff action, except for the supraspinatus. In this range, deltoid pulls the humeral head down As noted above in this range there is external rotation. With 20° or more of external rotation, biceps brachii is also able to abduct the arm.

With arm abduction or flexion, the shoulder girdle undergoes protraction or abduction, elevation, and upward rotation with posterior clavicular rotation maintaining the glenoid fossa in an optimal position. After deltoid and teres minor initiate elevation, serratus anterior and trapezius create lateral, superior, and rotational motions of the scapula, especially from 90-180°. Serratus anterior also holds the scapula to the thoracic wall by preventing the medial border from lifting off.

With lowering of the arm, i.e. adduction or extension, there is eccentric muscular action and retraction, depression, and downward rotation of the shoulder girdle along with forward clavicular rotation. Rhomboid, teres major, and latissimus dorsi work to control the arm during lowering. Pectoralis minor depresses and downwardly rotates the scapula, while the middle and lower portions of trapezius retract the scapula along with rhomboid.

If the arm is forcefully lowered or lowered against resistance then there is concentric muscular action. With external resistance the latissimus dorsi, teres major, and sternal portion of pectoralis major assist provide concentric action.

External rotation is produced by infraspinatus, posterior head of deltoid, and teres minor muscles. The prime external rotator is infraspinatus. Subscapularis is also active to prevent anterior displacement of the humeral head.

Internal rotation is produced by subscapularis, latissimus dorsi, teres major, and sternal head of pectoralis major. Subscapularis is active during all phases but decreased activity with extremes of abduction. Pectoralis major and latissimus dorsi also decrease with increased abduction, while the posterior and middle heads of deltoid contrict eccentrically to assist.

Extension is achieved through action from the posterior and middle heads of deltoid. Supraspinatus and subscapularis are also active throughout extension with eccentric activity preventing anterior dislocation.

With isometric contraction however, the flexors are stronger than the extensors.