The most common vertebral arrangement is of 24 presacral vertebrae, consisting of 7 cervical, 12 thoracic, and 5 lumbar vertebrae; and 5 sacral vertebrae (7C-12T-5L-TS). The cervical spine has a fixed vertebral count of 7, however the lumbar and thoracic vertebrae counts can be variable resulting in 23, 24, or 25 presacral vertebrae. It is termed "vertebral trade-off" when there is transitional anatomy but the total thoracolumbar count remains the same.[1]

It is important to accurately describe transitional anatomy as failing to do so can lead to surgery or interventions done at the incorrect level, and it can confound the neurological examination with variations in the myotomes.[2]

Transitional vertebrae occur when there is overlap of developing somites during cranial-caudal border shifting. The vertebrae affected have morphology of a combined nature of the two adjacent vertebral regions.

In development there are specific interactions between the vertebrae and spinal nerves, and the Hox genes are involved in the regulation of their development.[1] 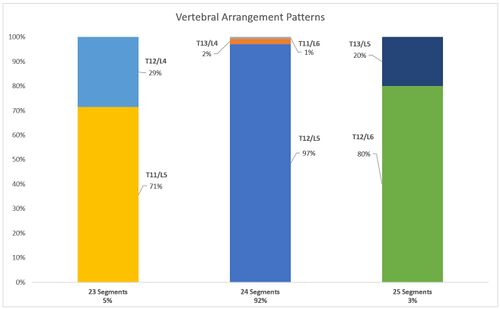 Vertebral arrangement patterns based on study of 135 individuals[3] 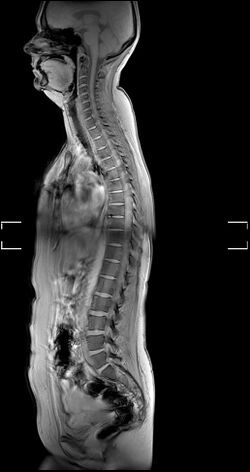 It can be difficult to establish whether a LSTV is a lumbarised S1 or a sacralised L5, and there have been various techniques described, with the best technique being high quality imaging of the entire spine.[2] MRI reports should state the method of numbering and how the LSTV was determined.

Survey sequences: In New Zealand, some private radiology providers will do a sagittal survey sequence of the entire spine (also called a sagittal localiser) as routine while others do not. You then count from the odontoid peg of C2 inferiorly, rather than counting cranially from L5. One can identify the L1 vertebral body, and subsequently determine the correct numeric assignment of the LSTV. Radiographs of the entire spine can fulfil the same purpose. If there is only a normal lumbar spine radiograph, then correct numeration may still be possible, but it can be tricky at the thoracolumbar junction to differentiate the hypoplastic rib from the transverse process. Thoracolumbar transitions can also make things difficult without a full spine view.[2]

Using a sagittal localiser sequence assumes there are 7 cervical and 12 thoracic vertebra. The method does not account for thoracolumbar transitional anatomy or allow one to differentiate between dysplastic ribs and lumbar transverse processes. Adding a coronal localising sequence can sometimes increase the accuracy of locating the thoracolumbar junction.[2]

Iliolumbar ligament: Locating the iliolumbar ligament is another technique described. This ligament is present at the L5 transverse process in 96.8% of people.[3] On MRI it is a low signal intensity structure on T1 and T2 images and looks like a single or double band that extends from the transverse process of L5 to the posteromedial iliac crest. It serves to restrict flexion, extension, axial rotation, and lateral bending of L5 on S1. As with other landmarks, identification of the iliolumbar ligament is not sufficient to identify the L5 vertebral body, but it can be used to identify the lumbosacral junction as it identifies the lowest lumbar type vertebral segment.[3]

Other anatomic markers: Using other markers such as the aortic bifurcation, right renal artery, and conus medullaris has also been described and are not satisfactory.[2] 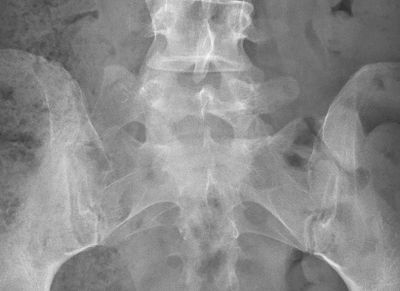 Bertolotti syndrome, the association between low back pain and LSTV, is controversial. A LSTV is certainly present in large numbers of asymptomatic people, but may be more common in those with back pain. Pain associated with LSTV is currently thought to arise from various different structures[2]

The implicated segments are normally types II-IV.[2] However it is thought that type I segments with their broadened transverse processes and broadened and short iliolumbar ligaments may lead to a protective effect of the L5-S1 disc space and possibly destabilise the L4-5 level.

Theoretically the LSTV will alter the biomechanics of the spine, and cause some stabilisation at this level. Structural pathology (disc integrity and spinal and foraminal stenosis) occurs almost exclusively at the level above the transitional segment, and never between the LTSV and the sacrum, with normal bright signal intensity on T2 weighted sequences on MRI at the LSTV. The level above the LSTV may be hypermobile at the ipsilateral anomalous articulation and/or the contralateral facet joint. Potentially relevant is that the iliolumbar ligaments above an LSTV are thinner and weaker at the level above the LSTV, resulting in destabilisation. The pseudoarticulated type 2 LSTVs have increased tracer uptake, while the fused type 3 LSTVs do not, and may be transmitting the forces superiorly or to the contralateral facet joint.[2]

Some of these changes may be akin to the adjacent-level disease seen post fusion, with hypermobility accelerating degenerative change at the facet joints and disc. This analogy could also explain the increased rate of contralateral facet joint arthrosis in unilateral type 2 and type 3 LSTVs, with forces being transmitted to the contralateral side.[2]

Assessing for nerve root symptoms in the presence of an LSTV lends to a few considerations, and may complicate assessment. Extraforaminal stenosis can occur with a nerve root being compressed between the hyperplastic transverse process of the LSTV and the adjacent sacral ala. Another explanation for nerve root symptoms is that disc prolapse can occur at the level above the LSTV at a greater rate than for those without an LSTV. Furthermore, in the absence of spondylolisthesis, spinal stenosis is also more likely to occur at the level above the LSTV.

The IASP lists pseudoarthrosis of a transitional vertebra in their taxonomy, but not other potential causes of pain in the context of transitional anatomy. It isn't clear to the author if this is an intentional or unintentional omission. They only give one reference from 1989 so it is assumed to be an unintentional omission. The relevant pathology may be a periostitis that occurs due to repeated contact between the two bones with resultant sclerosis, but the majority are asymptomatic. They state that the diagnostic criteria are that the pseudoarthrosis must be present radiographically, and the pain must be relieved with selective aneasthetic injection of the pseudoarthrosis without having the anaesthetic spread to other structures that might suggest an alternative source of pain.[7]

A study of 111 cadavers found the following[1]

When there is a true excess or deficiency in the number of vertebrae then the nerve roots are expected to shift up or down respectively. In those with a normal thoracolumbar count of 17 there are more individual differences than seen in the brachial plexus.

Throacolumbar transitional vertebrae (TLTV) may have hypoplastic ribs of <38mm in length, but this feature is not sufficient for detection.