From WikiMSK
WikiMSK > Regions > Foot and Ankle > Foot and Ankle Conditions > Ankle Fractures (Tibia and Fibula)
This is based on ported content from Orthopaedia.com
It is subject to the CC-BY-NC-SA license. This is an exception to the WikiMSK license. It is not for commercial use, but can be modified. 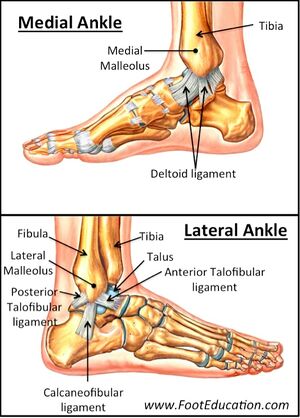 Figure 1: Bone and Ligament Anatomy of the Ankle Joint.

Ankle fractures are breaks of the distal tibia or fibula (near or in the so-called malleolus) affecting the tibiotalar (ankle) joint. Occasionally, they involve the shaft of the fibula as well. Ankle fractures range from simple injuries of a single bone to complex ones involving multiple bones and ligaments. Twisting with the foot planted on the ground and the body rotating around it is the most common mechanism of injury. Compression loading (ex. from a fall) is more apt to produce a fracture of the weight-bearing surface of the distal tibia (the plafond). These are designated as “pilon fractures," and are considered distinctly different injuries. Ankle fractures can be broadly divided into stable or unstable injuries. Stable fractures typically heal with immobilization and protected weight-bearing whereas operative management is usually required for displaced or unstable fractures. Ankle fractures directly or indirectly involve the ankle joint. Some residual ankle arthrosis is therefore not uncommon, even if the bone heals perfectly. 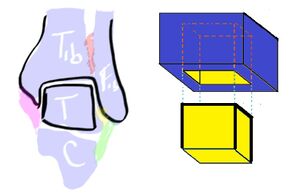 Figure 2: The Ankle forms a Mortise and Tenon (carpentry version shown at right). The mortise (the socket) comprises the lateral malleolus, the tibial plafond, and the medial malleolus. The tenon (or tongue) is the talus. As seen, the talus is wedged into a space just big enough to hold it.

The ankle joint is made up of the tibia, fibula, and talus (Figure 1). The tibia forms the superior and medial aspects of the joint, and the fibula its lateral aspect. The talus is a cube-shaped bone that sits above the calcaneus and below the tibial plafond. The distal ends of the fibula and tibia that overlap the talus are known as the malleoli (“little hammers”). The lateral malleolus is the distal end of the fibula, whereas the medial and posterior malleoli are part of the tibia. A fracture affecting both the medial and lateral malleoli is called a bimalleolar fracture, and one involving the medial, lateral, and posterior malleoli, the posterior aspect of the distal tibia, is called a trimalleolar fracture.

The tibial plafond, lateral malleolus, and medial malleolus form a mortise, a socket in which the talus sits (Figure 2). Although the ligaments are needed to give the ankle its full stability, the bony congruity of the mortise and the talus is a necessary component as well forming the most congruent joint in the lower extremity.

When the mortise is disrupted by a fracture, the talus is free to move more than it should. This abnormal motion leads to focal pressure points which can be damaging. Recall that pressure is defined by the force (load) divided by area. Thus, a smaller area of contact for a given load leads to higher pressure. This pressure produces new bone. This is in accordance with Wolff's Law, which states that bone grows in response to load. This new bone in turn makes the tissue below the cartilage more rigid (technically speaking less compliant). The loss of compliance makes the entire system more prone to damage. The surface may crack and not bend in response to a new load.

There are many methods of classifying ankle fractures: some are too simple (and therefore not very informative), and others provide more detailed information (yet become unwieldy and unreliable). It may be best, therefore to describe ankle fractures by the bones involved (i.e., isolated medial/lateral malleolar, bimalleolar, trimalleolar, etc.) and the presence of absence of soft tissue injury. Regarding the soft tissues, the single most important feature to note is whether the fracture is "open," that is, that the skin is broken.

Another important consideration is the stability of the ankle joint (Figure 3). Ankle fractures are classified as stable if the fracture is non-displaced or minimally displaced and the medial structures (deltoid ligament and medial malleolus) are intact. This type of injury allows the talus to remain anatomically positioned within the mortise, preventing displacement of the joint.

Ankle fractures are unstable if the injury allows the talus to be move within the mortise (Figure 4).

The fracture pattern often provides useful clues not only regarding the mechanism of injury but whether there are associated lesions (that may not be apparent on the x-ray). For example, a transverse fracture is produced by traction from ligaments pulling on the bone (Figure 5). Yet for this traction force to be produced, the foot must move medially, perhaps creating an impact on the medial side. Similarly, a fracture caused by a rotational ankle injury will often produce a spiral-type fracture of the distal fibula (Figure 6). This fracture pattern is associated with tearing of the anterior inferior tibiofibular ligament and possibly partial or complete injury to the deltoid ligament on the medial aspect of the ankle.

Patients with ankle fractures usually present with pain, swelling, and bruising. Patients typically describe an acute twisting injury in which the foot is planted on the ground and the body rotates around it.

The direction of rotation, the orientation of the foot while planted and the amount of energy that produces the fracture will determine which bones and ligaments may be injured. While this is useful information to obtain, it is often the case that the patient cannot recall or describe exactly what happened. Nonetheless, it is important to obtain a history of the general mechanism of injury, to help guide further investigation. For example, ankle pain after a fall from a height or a motor vehicle crash is likely to be from force transmitted from the heel up the leg, and therefore injury to the calcaneus, talus, tibial plafond, and more proximal bones (including even the spine) must be considered. 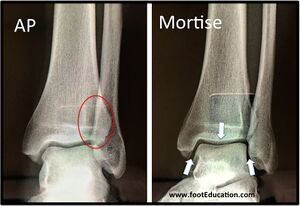 Figure 7: Mortise View of the Ankle (right). Internal rotation of the foot will give a clearer view of the mortise. Without such rotation (AP view left), the fibula, which is slightly posterior, will overlap with the tibia (red circle) making it difficult to assess the symmetry of the joint space (white arrows).

Patients with suspected ankle fractures should have x-rays performed: an anterior-posterior (AP), lateral, and mortise view. A mortise view is an AP view with the foot slightly internally rotated (about 15 degrees) which produces a clearer view of the mortise (Figure 7). These views should be evaluated for the integrity of the bones as well as proper alignment between joint surfaces.

Not all patients with ankle injuries should be "suspected" of having an ankle fracture. Indeed, according to one study of acute ankle injuries in the Emergency Department, sprains outnumber fractures by an 8:1 ratio.[1] To help guide the decision whether ankle x-rays are needed, the Ottawa Ankle Rules have been developed. According to these rules, ankle radiographs are not necessary if posterior malleolar (bony) tenderness is absent, and the patient can bear weight (take more than four steps).

In some patients, an unstable ankle fracture is only diagnosed after the ankle is "stressed" under x-ray revealing the lateral displacement of the talus and therefore disruption of the deltoid ligament or syndesmosis. 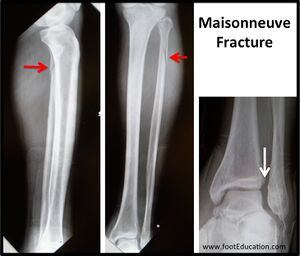 When a patient presents with an acute ankle injury, it is necessary to discern which structures have been damaged.

Injuries that cause ankle fractures may also cause damage outside of the ankle region per se. For example, a twisting injury to the foot and ankle may send force through the syndesmosis and interosseous membrane, up the leg. This can lead to a fracture of the proximal fibula near the knee -- a so-called Maisonneuve fracture (Figure 8). This injury is produced by a strong external rotation force, one that would assuredly damage the lateral side of the ankle as well. Yet no fibular injury is seen near the ankle. In this case, the lateral injury was to the proximal fibula. This injury is important to detect given the proximity of the common peroneal nerve to the fibular fracture line. While this type of high fibula fracture requires no treatment to heal adequately, the associated syndesmotic disruption and deltoid ligament disruptions usually require surgery to ensure precise reduction and stabilization of the syndesmosis.

Foot injuries involving the tarsometatarsal (Lisfranc) joint, the navicular bone or posterior tibial tendon, or the fifth metatarsal can easily be missed if attention is paid to only the ankle joint itself. 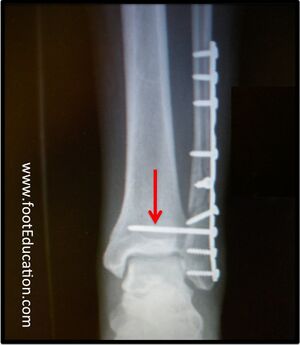 Figure 9: Ankle Fracture Fixation with a Plate and Screws.

All dislocations should be reduced (that is, realigned).

Open wounds should be cleaned and dressed; and prophylactic antibiotics (and a tetanus shot, if indicated) should be given.

The ankle should then be immobilized with a splint and elevated to minimize swelling.

If the fracture is stable and not displaced, a course of immobilization and protected weight-bearing for about 6 weeks may suffice. Following adequate bone healing, physical therapy can help the patient regain strength, range of motion, and proprioceptive function.

Operative fixation will be necessary if there is notable displacement of the bone fragments or the injury has caused a disruption of the ankle mortise. Surgery generally consists of making incisions at the affected malleoli, re-positioning the bony fragments to their appropriate positions, and holding them in place with screws and plates (Figure 9). The primary goal of surgery is to ensure that the talus is anatomically reduced and stable within the ankle mortise. The hardware can be left in the joint permanently unless it causes irritation, in which case it can be removed once the fracture has healed.

The longer screw (arrow) into the tibia is used to stabilize the syndesmosis and thereby reduce the ankle mortise by holding the tibia and fibula in the correct position to allow the ligaments that normally stabilize the ankle joint to heal.

Outcomes for stable fractures treated non-operatively are generally excellent. Ankle fractures treated with operative fixation heal uneventfully in approximately 85% of the cases. Not surprisingly, outcomes improve with more accurate reduction. Factors that negatively affect outcomes include involvement of the posterior malleolus, impaction of the talus, severe talar dislocation, and the presence of diabetes. Recovery time will depend on the severity of the initial injury but it often takes a year or more before patients reach their point of maximal improvement. Even then, mild to moderate symptoms may persist for years despite complete radiographic healing.

Sub-optimal reduction of the joint and resultant abnormal biomechanics will also promote the development of ankle arthrosis.

Another possible, albeit rare, complication of ankle fractures is complex regional pain syndrome (CRPS; previously known as reflex sympathetic dystrophy or RSD). This uncommon but debilitating condition is characterized by burning or throbbing pain, sensitivity to cold or touch, weakness, stiffness, and changes in skin color, temperature, or texture.

Valtola et al and Honkanen et al found that risk factors for the occurrence of ankle fracture in perimenopausal woman are cigarette smoking and a high body mass index.[3][4] According to Seeley et al, although low bone density is a risk factor for other fractures, it has not yet been shown to be a major risk factor for ankle fractures in this patient population.[5]

Just as a piece of masking tape yanked briskly from a wall may take with it a sliver of paint as well, a sprained ligament may yank with it a small sliver of bone -- a so-called avulsion fracture. The finding is important only that it informs the viewer that a sprain has occurred. The bony injury is itself insignificant, but patients will still often identify this injury as a “fractured ankle.”

Part or all of this article or section is derived from Ankle Fractures by Orthopaedia.com, used under CC-BY-NC-SA