The atlas (C1) sits on the axis (C2) and the wear is borne through the lateral antlanto-axial joints. Apart from its weight-bearing function, it also allows a large range of axial rotation.

There are three atlanto-axial joints, one median, and two lateral.

The articular surface of both the lateral atlantial and axial facets are convex, hence the joint is biconvex. The spaces in the anterior and posterior aspects are filled with intra-articular meniscoids.

The atlanto-axial joint provides axial rotation estimated to be 43 ± 5.5°. This is about 50% of the total range of axial rotation of the head and neck.

Flexion-extension is only about 10° (each way), and lateral flexion about 5° (each way).

With this passive motion, the atlas (C1) can often extend during full cervical flexion depending on whether the compression load is directed anterior or posterior to the atlanto-axial joint contact point. 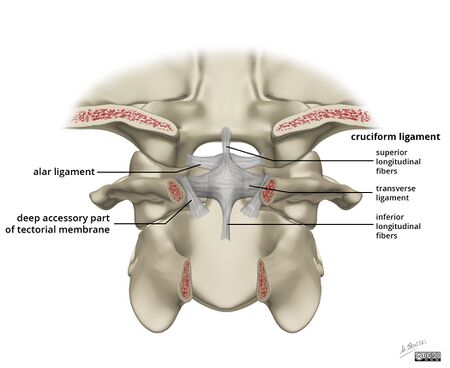 There are no true ligaments providing restraint to flexion and extension. There are fascial membranes that don't provide any significant ligamentous restraint. The atlas (C1) can flex until the posterior arch hits the occiput, or extend until it hits the neural arch of C2.

For axial rotation, the capsules of the lateral atlanto-axial joints and the alar ligaments provide some restraints. The capsules are loose and provide only minor restraint. The alar ligaments are the cardinal restraints to axial rotation and dislocation in rotation doesn't occur while this is intact. The alar ligaments run from the upper end of the odontoid process to the margin of the foramen magnum, bypassing the atlas (C1). They effectively lock the axis (C2) into the head and in doing so clamp the atlas (C1) between the skull and the axis (C2).

Disruption of an alar ligament can lead to rotatory instability. With excessive axial rotation, the lateral mass of the atlas (C1) can dislocate at the lateral atlantoaxial joint, leading to a fixed atlantoaxial deformity.

For lateral gliding, the primary restraint is the contralateral alar ligament, and bony impact of the lateral mass on the side of the odontoid process.