The enthesis (plural entheses) is the interface between tendon/ligament and bone. See also about the myotendinous junction, the connection between muscle and tendon

The function of the enthesis is to dissipate stress away from the interface.

The fibrous enthesis is where there is direct attachment to either bone or periosteum via dense fibrous fibrous connective tissue. This tissue is similar in composition to the tendon midsubstance.

It consists of tendons and ligaments being connected through acute angles to bones with collagen fibres extending directly from the periosteum, termed Sharpey's fibres.

This type of enthesis is commonly found in tendons that are attached to the metaphyses diaphyses of long bones. The insertion site is typically over large surface areas.

Examples are the deltoid attachment to the humerus, adductor magnus insertion to the linear aspera of the femur, and the pronator teres. 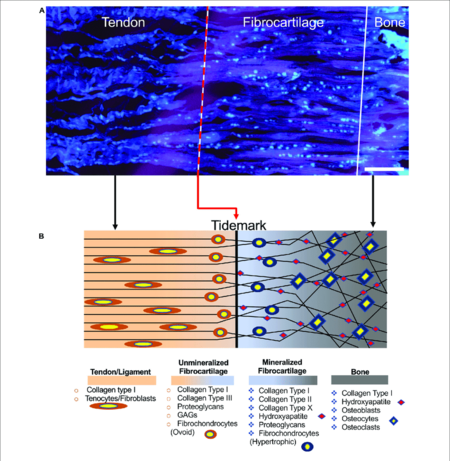 Structure of the fibrocartilaginous enthesis. (A) Enthesis cryocut section of a porcine Achilles tendon was stained for cells using SYTO R 13. Cells are depicted cyan (scale bar = 150 µm). (B) Graphical representation of the enthesis and its components.[2]

In this type of enthesis, there is a layer of fibrocartilage acting as a transition from the fibrous tendon to bone. The tendon is directly inserted into the bone and the tendon tissue close to the bone calcifies.

The fibrocartilaginous enthesis consists of a progressive mineralisation gradient that is organised into four zones.

The boundary between the unmineralised and mineralised fibrocartilage zones is called the tidemark where there is an abrupt transition between soft and hard tissues. The thickness of the junction is around 500 µm.

Tendons that insert onto the epiphyses and apophyses tend to have more variable ranges of insertion angles during their movement. This creates increased stress with bending of the collagen fibres. The fibrocartilage acts to dissipate this stress. In other words it is a structural adaptation. Compare for example the fibrous insertion of the deltoid muscle which doesn't change its angle greatly with abduction, to the fibrocartilaginous insertion of the supraspinatus which does change its angle greatly with abduction.

A disease process affecting the entheses is called enthesopathy or enthesitis. Enthesopathy is also associated with spondyloarthropathies. Many commonly seen tendinopathies are strictly enthesopathies.

Common locations for injury are the rotator cuff, the anterior cruciate ligament, the Achilles tendon, the medial collateral ligament of the knee, tennis elbow, and jumper's knee. The gradations present in fibrocartilaginous entheses are not regenerated during tendon to bone healing. Instead, fibrovascular scar tissue forms, composed primarily of type III collagen, which is mechanically weaker and more prone to failure than the original enthesis.

The optimal treatment strategies are as yet unknown.