The myotendinous junction (MTJ) is the interface between muscle and tendon, constituting an integrated mechanical unit. The MTJ allows force that is generated by the muscle to be transmitted from the muscle filaments to the collagen fibres of the adjoining tendon. See also about entheses, the connection between tendon/ligament and bone.

Synovial joints are acted upon by muscles which are mostly composed of water, proteins, salts, minerals, fat, and carbohydrates. The protein content is made up of various collagens to form their membranes; namely types I, III, IV, and V. The membranes are the endomysium, perimysium, and epimysium.

Cellularly, a single muscle cell is called a myocyte.

Tendons transmit forces between muscles and bones. Ligaments aid in maintaining physiological joint alignment. Tendons and ligaments are made up of water, collagen type I, elastin, and proteoglycans.

The basic structural unit of ligaments and tendons are the tropocollagen molecules that aggregate and form the collagen fibril. Fibrils come together to produce various structures of increasing complexity: sub-fascicles, fascicles, tertiary fibre bundle, and the whole tendon/ligament.

The subunits of tendons are surrounded by endotenon membranes, and that of ligaments by endoligament membranes. The epitenon/epiligament is for the whole tendon/ligament.

Cellularly there are fibroblasts for ligaments, and tenocytes for tendons. These cells are arranged in rows between the collagen fibres. 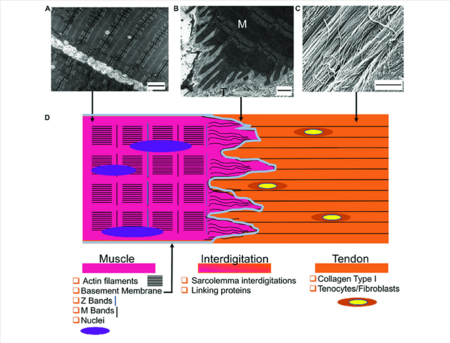 The MTJ allows a gradual transition between the stiff tendon and the softer muscle. The main difference to the enthesis, is that the MTJ connects a mostly cellular tissue (the muscle), to a mostly extra-cellular matrix based tissue (the tendon).

The MTJ has been described as having conical like finger projections that interdigitate with the tendon extracellular matrix with invaginations and evaginations of the sarcolemma (the muscle cell membrane). The finger-like processes might have various functions.

The tendinous portion is made up of multidirectional collagen fibres. In the tendon the force is longitudinal hence orientation is also longitudinal here. However close to the muscle the force can be in many directions. This allows force transmission laterally via the endomysium to adjacent myofibres.

As the sarcomeres extend towards the MTJ, they appear to change direction, with the longitudinal axis of the sarcomeres becoming parallel with the major axis of the finger-like processes, allowing force transmission via shear as above. There is a final Z-line from the muscle fibre at the MTJ.

Actin myofilaments of the terminal sarcomeres extend from the final Z-line into the plasma membrane to merge with the tendon tissue. It does this by anchoring the muscle cytoskeleton to the tendon extracellular matrix. There are at least two cytoskeletal proteins, vinculin and talin, that are involved in linking the thin filaments to the extracellular structural proteins. There is a separate structural link that traverses the cell membrane of the muscle called integrin, existing within the cell membrane at the MTJ.

On the extracellular side of the MTJ there is a well-developed basement membrane. The basement membrane contains fibronectin, laminin, and type IV collagen. Some of these proteins have an affinity for the tendinous collagen.

The actin filaments are bundled by actin-binding proteins, and are linked to the sarcolemma through intracellular proteins. There are also transmembrane protein complexes that act to connect the cystoskeletal components to the basement membrane components, as well as proteins that link the basement membrane to the surrounding collagen-rich matrix.

The MTJ is a dynamic structure that can adapt to mechanical stimuli. In rats that exercise regularly there are more branches from the finger-like processes compared to non-exercising rats. The angulation of the processes relative to the longitudinal direction also increased.[5]

With aging we we see shortening of the interdigitations. There is a decrease in contact area between the sarcolemma and extracellular components, but is associated with muscle atrophy.[6]

Injuries to the MTJ are common. Muscle failure in situ is not associated with separation at the interface between muscle at tendon, but rather in the body of the muscle cells just proximal to the MTJ. [7]