Arches of the Foot

There are three arches formed by the tarsal and metatarsals creating an elastic shock-absorbing system.

The plantar fascia originates on the medial tuberosity of the calcaneus and spans the transverse tarsal, tarsometatarsal, and metatarsophalangeal joints to insert on the metatarsophalangeal plantar plates and collateral ligaments as well as the sesamoids. Digital slips extend beyond the MTPJs.

Dorsiflexion of the metatarsophalangeal joints places traction on the plantar fascia and causes elevation of the arch through a mechanism known as the “windlass effect”. During toe-off in the gait cycle, the toes are dorsiflexed passively as the body passes over the foot and the plantar fascia tightens and acts to shorten the distance between the metatarsal heads and the heel, thus elevating the arch. This supports both arches and protects the underlying neurovascular bundles.

It receives a wide range of tensions as it is flattened in dorsiflexion and increased in plantarflexion. Plantar fasciitis can develop in the setting of decreased ankle dorsiflexion (running on forefoot) and high body mass index.

The plantar skin is firmly attached to the underlying bones, joints, and tendon sheaths of the heel and forefoot by specialized extensions of the plantar fascia. This function of the plantar fascia is essential for traction between the floor and the foot’s weight-bearing skeletal structures to occur. The heel pad consists of comma-shaped or U-shaped fatfilled columns arrayed vertically. The septae are reinforced internally with elastic transverse and diagonal fibers to produce a spiral honeycomb effect. 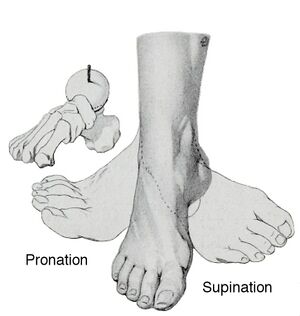 Supination and pronation of the foot

Abduction motion of the foot/ankle can be demonstrated by maintaining the foot flat on the floor in a seated position and sliding the surface of the foot laterally (without moving the tibia/fibula). Abduction/adduction motion of the foot/ankle primarily occurs at the subtalar and midtarsal joints and is quite limited. Second, the terms inversion and eversion represent motion in the coronal plane about an anterior/posterior axis (this motion is termed abduction/adduction elsewhere in the body). Inversion/eversion occurs primarily at the subtalar and midtarsal joints and can be demonstrated by moving the plantar surface of the foot to face medially (inversion) or laterally (eversion). Flexion/extension of the foot is termed dorsiflexion and plantarflexion respectively and occurs around a medial/lateral axis in the sagittal plane. This motion occurs primarily at the talocrural joint.

Major joints of the ankle/foot (talocrural, subtalar, midtarsal) have axes of motion that are oblique to the standard orthogonal axes. Supination and pronation are the appropriate terms to describe motion around the oblique axes of the foot that occur at the talocrural, subtalar, and midtarsal joints. Supination and pronation describe motion around a single axis.

Kinetics of the Foot

Effects of Shoes on Biomechanics

The ankle joint is extremely stable primarily owing to bony congruency and ligamentous support. Bony congruency afforded by the two malleoli and tibial plafond form a “mortise” joint with the dome of the talus. The talus is shaped like a truncated cone, or frustum, with the apex directed medially. The talus is 4.2 mm wider anteriorly than posteriorly. The anterior increase in dimension is important functionally because during dorsiflexion the anterior portion of the talus is compressed between the tibia and fibula (spreading the mortise slightly) and the ankle joint becomes “close packed” in a position of maximal stability.

normal motion of 10° to 20° dorsiflexion and 40° to 55° plantarflexion.  Joints of the midfoot contribute 10% to 41% of clinical plantarflexion from neutral to 30° plantarflexion. Therefore, what appears to be clinical ankle plantarflexion is actually occurring distal to the ankle itself. This midfoot motion explains the apparent ability of the foot to dorsiflex and plantarflex following ankle fusion.

The great toe provides stability to the medial aspect of the foot through the windlass mechanism of the plantar aponeurosis. As the body passes over the foot in toe-off, the metatarsal head is pressed into the floor through the stabilizing action of the fibularis longus. This has been confirmed by force plate analysis in the late stance phase, which shows that pressure under the first metatarsal head increases in this phase of gait. Wearing narrow, high-heeled shoes can predispose the individual to mechanical entrapment of the interdigital nerves (more commonly the third) against the transverse intermetatarsal ligaments by compressing the metatarsal heads and creating a painful neuroma.

Excessive stress on the first metatarsophalangeal joint may result in inflammation or stress fractures and resulting pain on the sesamoid bones that are embedded within the flexor hallucis brevis tendon.