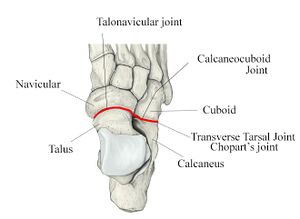 The transverse tarsal joint, with a ball-and-socket talonavicular joint, and saddle-shaped calcaneocuboid joint

The transverse tarsal joint or midtarsal joint or Chopart's joint is formed by the articulation of the calcaneus with the cuboid (the calcaneocuboid joint), and the articulation of the talus with the navicular (the talocalcaneonavicular joint). This pair of joints separates the midfoot from the rearfoot (i.e. calcaneus and talus) by allowing the midfoot to move independently of the rearfoot. It works with the subtalar joint to control foot flexibility during the gait cycle.

Unlike the ankle and subtalar joint, the transverse tarsal joint has two axes (longitudinal and oblique) resulting in substantial motion in all three planes.

The talonavicular joint generally has a higher range of motion than the calcaneocuboid joint. Precise measurements of range of motion are difficult to determine, but it is generally thought that it has similar amounts of pronation and supination as the subtalar joint.

Relationship with the Subtalar Joint

The transverse tarsal joint has the ability to perform the most pure form of pronation[notes 1] and supination[notes 2]. It allows the midfoot to conform to a variety of different positions depending on the terrain. The joint is considered to be part of the same functional unit as the subtalar joint because they share a common axis of rotation with contribution to inversion and eversion of the foot.

The "tarsal mechanism" refers to pronation/supination at the subtalar joint driving motion at the midtarsal joint.

The talocalcaneonavicular joint is stabilised by the below ligaments along with the tibialis posterior tendon.

The bifurcate ligament is in two parts, and travels from a deep hollow on the upper surface of the calcaneus to the cuboid and navicular.

ATFL injuries can occur along with injury to the calcaneocuboid ligament. Pain may be reproduced by fixing the rearfoot in dorsiflexion and eversion, and then inverting and adducting the forefoot.