The talocalcaneal joint, also called the clinical subtalar joint, is an important and complex joint in the hindfoot that allows articulation of the talus and calcaneus. 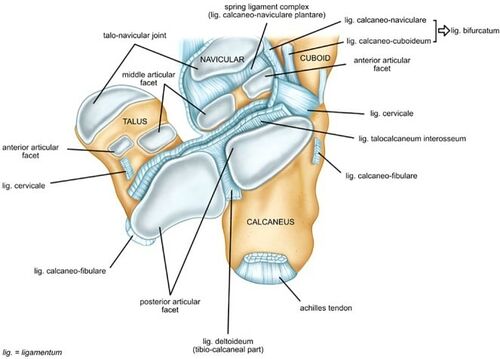 The calcaneus forms a triplanar, uniaxial joint with the talus.

The subtalar joint axis has one degree of freedom and is set at an oblique angle that is oriented upward at an angle 42° from the horizontal and medially 16° from the midline.

The three calcaneal facets vary in their shape between individuals. Variations are common and include combined anterior and middle facets in ovoid form in 42%, bean form in 22%, and complete separation in 36%.

The sustenataculum tali is comprised of the dorsal surface of the middle calcaneal facet. It allows slides of the tibialis posterior, flexor hallucis longus, and flexor digitorum longus tendons.[1]

There are a number of ligaments.

The interosseous ligament if dysfunctional, especially in combination with anterior talo-fibular ligament failure, results in abnormal anterolateral rotation of the talus during walking. This leads to subtalar joint and secondary ankle joint instability.

The extensor tendons influence subtalar joint stability and movement. The inferior extensor retinaculum is important here for tendon function as it acts like a pulley. There is also support from the tendons of peroneus longus, peroneus brevis, flexor hallucis longus, tibialis posterior, and flexor digitorum longus. 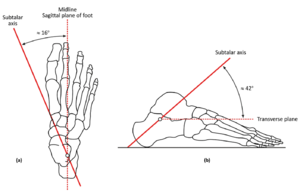 Subtalar joint movement is very complex. It has one degree of freedom set at an oblique angle oriented upward at 42°. This splits the movement into equal amounts of component motions of inversion/eversion and abduction/adduction.

The right posterior calcaneal facet can be compared to a right handed screw. As the calcaneus inverts during subtalar supination, it rotates clockwise and translates forward along the axis.

In the first 15% of the stance phase the entire lower extremity rotates internally, the subtalar joint everts, and the foot pronates. The transverse joint is unlocked, and the forefoot becomes flexible to absorb shock and adapt to ground surface irregularities. Eversion occurs partially due to the fact that the heel point of contact is lateral to the centre of the ankle joint, and this produces a valgus thrust on the subtalar joint.

In the middle of stance phase and at push-off the entire lower extremity begins to rotate externally while the subtalar joint simultaneously inverts. When the subtalar joint inverts and the foot supinates, locking the transverse joint, and causing the foot to be transformed into a rigid structure capable of propulsion.

Inversion and eversion can also be used to make corrective postural adjustments to keep the foot stable under the centre of gravity.

The second function of the subtalar joint is shock absorption which can be accomplished by pronation. The subtalar joint also allows the tibia to internally rotate faster than the femur, which helps with unlocking the knee joint.[3][4]

Triceps surae has a slight inversion function while the ankle joint is in flexion/inversion and may change to an evertor when the subtalar joint is in eversion.

The joint is supplied by two arteries and two nerves.