From WikiMSK
WikiMSK > Regions > Hand and Wrist > Hand and Wrist Conditions > Ganglion Cysts (Hand and Wrist)
This is based on ported content from Orthopaedia.com
It is subject to the CC-BY-NC-SA license. This is an exception to the WikiMSK license. It is not for commercial use, but can be modified. 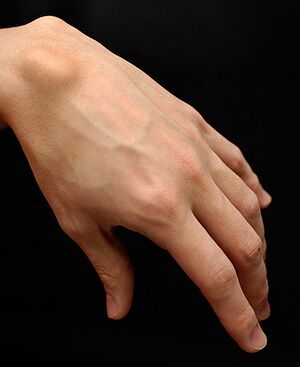 Figure 1: Ganglion cyst of the wrist

Ganglion cysts are benign, fluid filled, soft-tissue masses found near the joints of the wrist and fingers (Figure 1). Ganglions usually grow out of the tissues surrounding a joint or a tendon sheath. The most common location for a hand ganglion -- accounting for more than 75% of all cases -- is on the dorsum of the wrist, emanating from the scapholunate joint. Cysts found at the DIP joint or IP joint of the thumb are denoted as “mucous cysts” and are associated with osteoarthritis. The ganglion cyst of the flexor tendon sheath is known as a “retinacular cyst.”

The exact etiology of ganglion formation is unclear, although the prevailing theory is that the cyst forms when there is a herniation of a weakened portion of the joint capsule or tendon sheath. Accordingly, it is though that repeated mechanical stress, which would weaken the joint capsule, may be to blame.

Mucous cysts are typically associated with arthritis in the finger joint.

The cysts themselves are thin-walled sacs. The wall is composed of collagen. Although cysts usually emanate from the joint (and remain connected to it via a “stalk” or pedicle) they lack a synovial lining and therefore are not, technically speaking, “synovial cysts.” (Along those lines, note that the fluid in the cyst is not true synovial fluid either: in cysts, the concentrations of hyaluronic acid, glucosamine, albumin, among others, is higher.)

Microscopic examination may show evidence of a mild, chronic inflammatory cellular reaction in the myxoid wall. 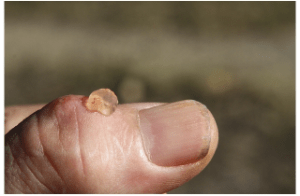 Ganglion cysts are usually oval and vary in both firmness and size. They usually form a visible bump, although some can be “occult.” Occult cysts are neither apparent to the naked eye nor to palpation and are visible only with imaging studies.

The average diameter of a ganglion cyst is about 2.0 cm, but cysts more than double this size have been observed. The size of the cyst may vary over time and may increase after activity and decrease with rest.

Although most ganglions are asymptomatic, if pressure is placed on the nerves that pass by the joint, patients may present with tingling and muscle weakness.

Pain is a feature of ganglion cysts, particularly retinacular cysts which are located in the tendon sheath. This pain is typically provoked with gripping motions.

The most common location for a ganglion is on the dorsum of the wrist, emanating from the scapholunate joint. This joint accounts for more than 75% of all cases. Small occult dorsal wrist ganglia may present as a dull ache in the wrist, with tenderness over the scapholunate ligament and pain with hyperextension of the wrist.

Mucous (also known as "mucinous") cysts (Figure 2) are ganglion cysts specifically located in the dorsal region of the IP joints of the fingers. Mucous cysts are often associated with underling arthritis and bone spurs (osteophytes).

Mucous cysts may ulcerate or may cause deformity of the nail.

Some patients with painless cysts may present to the physician simply to make sure “It’s not cancer.” For these patients, it may be worthwhile to assess for trans-illumination (that is, the passage of light through the cysts). To do this, the examiner dims the room lights and places a small flashlight directly on the mass. The absence of trans-illumination is not necessarily worrisome (for one thing, the cyst may be too small to manifest this phenomenon) but a positive test may be all the patient needs to see. 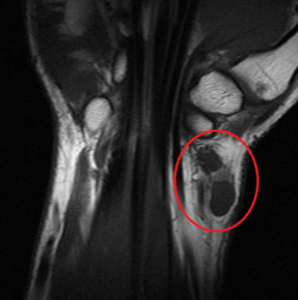 Plain radiographs are generally not useful in diagnosing ganglion cysts, but can help rule out other pathologic processes.

Lab studies are generally not part of the diagnostic work-up for ganglions, as all values are expected be within normal limits.

Advanced imaging studies may be useful in the evaluation of a mass when clinical diagnosis of a ganglion cyst is uncertain. Ultrasound of the wrist can also be used to evaluate ganglia. However, because ultrasound may not be uniformly available, is operator-dependent, and does not provide maximal anatomic information (e.g. underlying bone quality), MRI may be a better choice. Alternatively, some may recommend ultrasound over MRI because it is less expensive. Ultrasound, moreover, is less likely to find "incidentalomas," that is, findings that are truly there but also truly irrelevant.

MRI findings of ganglia (Figure 3) include defined margins, a multi-loculated appearance, and wall enhancement. Ganglia are bright on T2 and dull on T1. After contrast administration and fat suppression, diffuse contrast enhancement is seen within the lesion. MRI may be particularly useful for the differentiation of a cyst versus a tumor. MRI is particularly helpful for volar (palmar) wrist ganglia, especially if surgery is planned, as the palmar side has more anatomic structures with which the cyst could interact.

The true incidence of ganglion cysts is unknown; however, a recent study found that MRI scans of healthy asymptomatic volunteers identified wrist ganglia in about half of the study participants.

Ganglia are three times more prevalent in females than in males.

May occur in children and the elderly, but occur most commonly in the second to fourth decades of life.

The differential diagnosis of ganglions, including retinacular or mucoid cysts, may include a true synovial cyst, extensor tenosynovitis, synovial sarcoma, extra-skeletal chondrosarcoma, venous aneurysm, or xanthoma. A cyst that looks like ganglion cyst probably is a ganglion cyst; those that are atypical can be studied further with MRI or ultrasound, or sent to a hand specialist.

Pain associated with fever, chills, and erythema about the mass may be due to underlying infection requiring urgent diagnosis and treatment.

Multiple joint pain and swelling may suggest a systemic inflammatory arthritis rather than a localized process such as a ganglion cyst.

Many ganglion cysts resolve spontaneously. Consequently, some advocate that the best treatment is no treatment.

Ganglion cysts may shrink in size and later recur. In this situation patients may require nothing more than reassurance (as waxing and waning is not a worrisome sign).

For those patients in whom repetitive motion is a suspected cause (or for those whose personalities insist that some affirmative steps be taken) splints or braces are reasonable treatment options.

Aspiration of the cyst in the office (or variations, including attempts to tear the cyst wall with a needle or puncture the cyst in multiple locations) may be used to remove the fluid and thereby decompress the cyst. Because the stalk remains intact, recurrence of the cyst is not uncommon.

Augmenting the aspiration with injection of methylprednisolone does not seem to decrease the recurrence rate and does introduce the risk (albeit small) of complications. As such, steroids are not recommended. Indications for more aggressive treatment include pain, interference with activity, nerve compression, and imminent ulceration (as may be seen in mucous cysts).

Surgery involves removing the cyst along with a portion of the joint capsule or tendon sheath. In the case of wrist ganglion cysts, both traditional open and arthroscopic techniques are good options. Surgical treatment is generally successful as long as the "stalk" of the cyst is excised.

Cyst excision alone is not recommended because without capsulectomy there is a high rate of recurrence. Osteophyte excision can sometimes lead to DIP joint instability.

IP joint arthrodesis prevents recurrence of mucous cysts and is a good option if the pain is thought to be secondary to underlying arthritis.

The recurrence rate after cyst puncture and aspiration is greater than 50% for cysts in most locations, but is less than 30% for cysts in the flexor tendon sheath. The recurrence rate after aspiration is higher than the rate after excision of the cyst. The reported incidence of recurrence following cyst excision has varied from ~1% to 50%, presumably due to variations in cyst size, configuration, location, surgical technique, and postoperative immobilization. Stalk resection has been advocated as an important measure to decrease potential recurrence.

In a large prospective trial comparing reassurance alone to aspiration or surgical excision, the resolution of symptoms (wrist pain, weakness, and stiffness) was similar between the 3 groups. However, 58% of patients in both the reassurance and aspiration groups had persistence of the lesion, whereas 39% of the surgical excision group had recurrence. Up to 80% of those who had aspiration or excision were satisfied, compared with only 53% of patients who were solely reassured—though this may represent a psychological action bias.

In a study of palmar wrist ganglions, there was no difference in symptoms regardless of whether they were treated by excision, aspiration, or observation.

Aspiration of palmar wrist ganglions is not recommended due to the proximity to the radial artery.

Cyst excision alone is not recommended, as without osteophyte excision, there is a recurrence rate of 10-27%. Cyst excision with DIPJ osteophyte excision results in a 0% to 3% recurrence rate, with many but not all patients having resolution of nail ridging as well. Surgical complication rate is roughly 8% and may include wrist stiffness, pain, keloid formation, weakness, scar tenderness, infection, decreased motion, damage to the scapholunate interosseous ligament, tendon injury, and neurovascular injury.

Ganglion cysts can develop in anyone but are more commonly observed in women. Joints or tendons that have been injured in the past are more likely to develop ganglion cysts in the future. Arthritis is a predisposing factor for mucous cysts.

There are no commonly accepted preventive measures.

The term "Bible cyst" is sometimes used to describe ganglion cysts of the hand. This name is derived from the practice of striking (or should we say “smiting”?) cysts with a Bible to rupture them and drain into the surrounding tissues. This is not a currently recommended treatment.

Although physicians may be dismissive of ganglion cysts, given the benign natural history of this condition, patients can have substantial concerns. Indeed, in one report, a majority of patients seeking medical attention for their ganglion cysts came because of concerns beyond symptoms, including alarm about the cyst’s appearance or malignant potential.

Part or all of this article or section is derived from Ganglion Cysts by Orthopaedia.com, used under CC-BY-NC-SA