From WikiMSK
This article is still missing information. Join WikiMSK to help expand it

The hip functions to support the weight of the upper body and transmit forces to the lower extremities. The ball and socket configuration allows for stability and mobility. 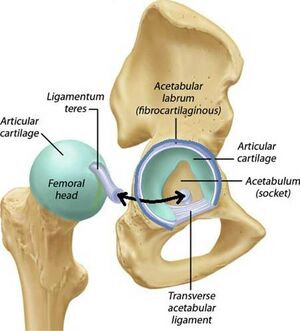 Lateral view of the acetabulum with the labrum and transverse acetabular ligament intact.

The acetabulum is not completely spherical due to the acetabular notch in its inferior region, which makes it fundamentally horseshoe shaped. Articular cartilage, covering the surface of the acetabulum, thickens peripherally and laterally, though most notably in the superior-anterior region of the dome.

Unlike capsular tissue, labral tissue is made up predominantly of fibrocartilage. Arthroscopic visualization of damaged labral tissue has shown more extensive penetration of vascular tissue throughout the entire labral structure, which suggests more healing potential than previously believed. The labrum plays a role in containing the femoral head in extremes of motion, particularly in flexion.

It is believed that there is interaction between the intra-articular fluid and the labrum, which decreases peak pressures in the joint. The labrum also plays a role in maintaining a vacuum within the joint space, which is produced by the acetabular fossa, a depression in the centre of the acetabulum.

The femoral head, the convex component of the ball-and-socket configuration of the hip joint, forms two-thirds of a sphere. The articular cartilage covering the femoral head is thickest on the medial-central surface surrounding the fovea into which the ligamentum teres attaches and thinnest toward the periphery. The load-bearing area is concentrated at the periphery of the lunate surface of the femoral head at smaller loads, but it shifts to the center of the lunate surface and the anterior and posterior horns as loads increase.

Femoral torsion of the right femur. Average adult value is 10-20° of anteversion. Excessive femoral anteversion is >20°. Femoral retroversion is <10°.

The torsion angle reflects medial rotary migration of the lower limb bud that occurs in fetal development; it is commonly estimated at 40° in newborns, but decreases substantially in the first two years of life. A torsion angle of between 10° and 20° is considered normal. Angles greater than 12°, known as anteversion, cause a portion of the femoral head to be uncovered and create a tendency toward internal rotation of the leg during gait to keep the femoral head in the acetabular cavity. Retroversion, an angle of less than 12°, produces a tendency toward external rotation of the leg during gait. Both are fairly common during childhood and are usually outgrown.

The interior of the femoral head and neck are composed of cancellous bone with trabeculae organized into medial and lateral trabecular systems (See Image). The forces and stresses on the femoral head—most specifically the joint reaction force—parallel the trabeculae of the medial system.

The hip capsule, composed of three capsular ligaments, is an important stabilizer of the hip joint, especially in extremes of motion, where it acts as a check rein to prevent dislocation (Johnston et al., 2007). The capsular ligament is made up of three reinforcing ligaments—two found anteriorly and one posteriorly. The capsule is thickened anterosuperiorly, where the predominant stresses occur, and is relatively thin and loosely attached posteroinferiorly. Due to the rotation that occurs in fetal development of the hip joint, the capsular ligaments are coiled around the femoral neck in a clockwise direction, meaning that they are tightest in combined extension and medial rotation of the hip joint, which further coils the ligaments, and loosest in flexion and lateral rotation. 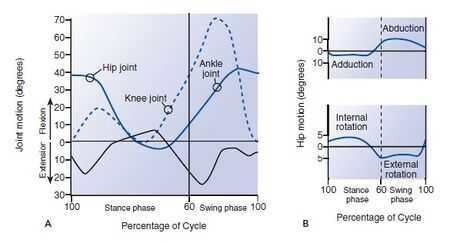 A: ROM of lower limb joints in sagittal plane with walking. B: ROM in frontal plane (top) and transverse plane (bottom)
Copyright Nordin and Frankel

Maximal motion in the sagittal plane (hip flexion) was needed for tying the shoe and bending down to squat to pick up an object from the floor. The greatest motion in the frontal and transverse planes was recorded during squatting and during shoe tying with the foot across the opposite thigh. The values obtained for these common activities indicate that hip flexion of at least 120° and external rotation of at least 20° are necessary for carrying out daily activities in a normal manner.

Easier to calculate forces when two leg stance, as don’t have to include abductor muscle forces, just ground reactive forces. 1 leg stance--- more complicated, need to include other forces.

In men, two peak forces were produced during the stance phase when the abductor muscles contracted to stabilize the pelvis. One peak of approximately four times body weight occurred just after heel-strike, and a large peak of approximately seven times body weight was reached just before toe-off. In women, the force pattern was the same but the magnitude was somewhat lower, reaching a maximum of only approximately four times body weight at late stance phase. several factors: a wider female pelvis, a difference in the inclination of the femoral neck-to-shaft angle, a difference in footwear, and differences in the general pattern of gait. It was found that females walked with greater adduction angles at the hip, which contributed to the greater adduction moment, suggesting a narrower step width relative to pelvic width. This implies that the hip joint stress for the female population is higher, not only in static situations, but also in dynamic activities, as compared with males.