The hip joint is a synovial joint between the femoral head and the acetabulum of the pelvis.

The hip is a ball and socket joint. The ball is the spherical head of the femur, while the socket is the concave acetabulum. The cartilage of the hip is viscoelastic which means that the amount of deformation that occurs to the cartilage is inversely proportional to the magnitude of load and rate that the load is applied (e.g. high load leads to little deformation).

The acetabulum is horseshoe shaped with the acetabular notch in the inferior region. The acetabular cartilage is thicker in the periphery where it merges with the labrum. It is particularly thick in the superior-anterior region of the dome. Articulation with the femoral head only occurs on the horseshoe-shaped hyaline cartilage.

The acetabulum is angled obliquely forward: it is directed anterior, lateral, and inferior. A mal-aligned acetabulum doesn't adequately cover the femoral head and this can lead to chronic dislocation and early onset osteoarthritis. 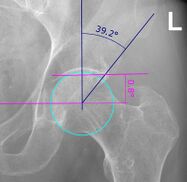 Figure 1. The lateral centre-edge angle (LCEA) and acetabular index (AI) on AP pelvic radiograph are measures of coverage of the femoral head by the acetabulum. Normal is 20-45° 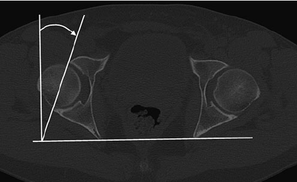 Figure 2. The acetabular version angle can be measured on CT in the axial plane. The acetabulum is normally anteverted to around 20°.

Lateral Centre-Edge: How much coverage the acetabulum provides over the femoral head in the frontal/coronal plane is measured by various parameters on radiographs such as the centre edge angle which normally measures 20-45° (Figure 1). A normal centre edge angle provides a protective shelf over the femoral head in the coronal plane, while a small angle means that there is less coverage leading to risk of dislocation and injury. A larger angle such as in pincer femoro-acetabular impingement protects against developing hip osteoarthritis.

Acetabular Version: In the horizontal/axial plane femoral head coverage can be measured by angle of acetabular anteversion and this measures 20° on average (Figure 2). An increase in this angle such as in hip dysplasia is associated with decreased joint stability and an increased risk of dislocation, labral injury, and chondral injury. Version can also be seen on frontal views, with the crossover sign being consistent with acetabular retroversion, and the absence of the crossover sig being consistent with acetabular anteversion. Acetabular version can vary greatly with pelvic tilt. (See Hip Radiograph)

Labrum: The labrum is a fibrocartilaginous lip that encircles and deepens the acetabulum. It blends with the transverse acetabular ligament which spans the acetabular notch. It helps to contain the femoral head in place in extremes of motion, especially in flexion. Along with the capsule, the labrum acts as a load-bearing structure during flexion. The labrum helps to maintain a negative pressure vacuum within the joint that is produced by the acetabular fossa which helps to stabilise the joint. Individuals with a deficient labrum may have instability and capsular laxity. 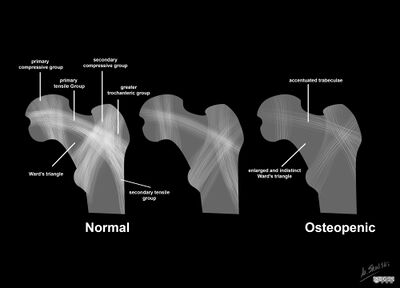 Figure 3. Trabecular system of the femoral head and neck.

The femur is the largest and strongest bone in the body.

The head and neck are composed of cancellous bone. The trabecular patterns of growth follow the course of stress lines along the bone with maximum trabeculae developing along lines of maximum stress (both compressive and tensile). There are five types of trabeculae - two compressive, two tensile, and the greater trochanteric trabeculae.

There are also trabecular lines corresponding to tensile forces. The primary tensile system forms an arc extending from the lateral margin of the greater trochanter to the inferior aspect below the fovea. There is a central area bounded by three systems called Ward's triangle which is a zone of weakness in the anatomical neck.

The cortical bone is thin on the superior surface, and progressively thickens towards the inferior region. During the aging process the cortical bone becomes thinner and cancellated while the trabeculae are gradually resorbed.

Femoral Head: The femoral head is the convex part of the ball-and-socket joint of the hip. It forms two-thirds of a sphere. The head is covered by cartilage which is thickest on the medial-central aspect surrounding the fovea (the ligamentum teres attaches to the fovea), and is thinnest towards the periphery. With smaller loads the load-bearing area is concentrated at the periphery; while with larger loads the load-bearing area is concentrated at the centre and anterior and posterior horns. (due to the viscoelastic properties of the cartilage). Hip dysplasia leads to improper load distribution which leads to osteoarthritis and further changes in load distribution.

Figure 5.Femoral torsion of the right femur. Average adult value is 10-20° of anteversion. Excessive femoral anteversion is >20°. Femoral retroversion is <10°.

Femoral Neck: The femoral neck is the narrowest part and internally it is primarily composed of trabecular bone, and so it is the weakest component of the femur. The femur angles medially downward to aid in single-leg support during walking and running.

The Angle of Inclination: The angle of inclination is a frontal/coronal plane measurement and is normally 90-135° but is greater at birth and in childhood. An increased angle is called coxa valga, and a decreased angle is called coxa vara. For both of these variations there is a change in the biomechanics of the hip related to changes in the moment arm used by the hip abductors and changes in shear forces (See Nordin and Frankel).

Femoral Version: Femoral version is the angle of the femoral neck in the axial plane relative to the angle of the knee (through the femoral condyles) in the horizontal/axial plane, which can be measured on CT. The normal angle is 10-20° of femoral anteversion. Newborns have even more anteversion, and this is a reflection of the medial rotatory migration of the lower limb bug that occurs in embryological development. With excessive femoral neck anteversion, a portion of the femoral head is uncovered and there is a tendency for the leg to internally rotate during gait to keep the femoral head in the acetabular cavity (in-toeing). With retroversion, there is a tendency for the leg to externally rotate during gait (out-toeing). These are both quite common in childhood but individuals usually outgrow it. 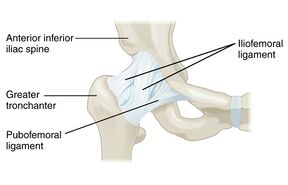 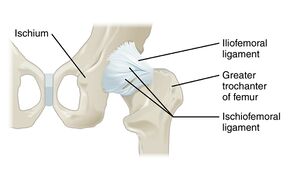 The labrum is a ring of fibrocartilage that contributes to joint stability. Compared to the glenoid fossa of the shoulder, the acetabular fossa is much deeper and so is more stable.

The hip capsule is composed of three capsular ligaments: two anterior called the iliofemoral and pubofemoral ligaments, and one posterior called the ischiofemoral ligament. The hip capsule is an important stabiliser of the hip, especially at extremes of motion to prevent dislocation. These major ligaments act to twist the head of the femur into the acetabulum during hip extension.

The capsule is thickened anterosuperiorly which is the site of predominant stress. It is relative thin and loosely attached posteroinferiorly. The ligaments are twisted around the neck in a clockwise direction. This reflects embryological development. This means that the ligaments are tightest in medial rotation and extension, and loosest in flexion and lateral rotation

There is also the transverse acetabular ligament which prevents inferior dislocation of the femoral head.

Within the joint capsule is the ligamentum teres which attaches directly from the rim of the acetabulum to the head of the femur.

The pelvic girdle is analogous to the shoulder girdle in that it positions the hip for effective movement. The shoulder girdle is made up of multiple different joints, while the pelvis is non-jointed. Nevertheless, the pelvis is able to rotate in all three planes. With pelvic rotation, the acetabular position is changed so that it is directed towards the impending femoral movement. Posterior pelvic tilt enables increases hip flexion by placing the head of the femur in front of the pelvis. Anterior pelvic tilt increases hip extension, and lateral pelvic tilt increases lateral movements. The pelvis also moves in coordination with the spine.

There are a variety of two-joint muscles. Two-joint muscles function most effectively at one joint when the position of the other joint stretches the muscle slightly.