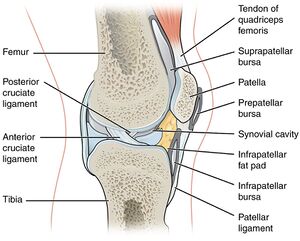 The infrapatellar fat pad (figure 1) also known as Hoffa's fat pad is the primary adipose structure within the knee joint. It is found between the joint capsule anteriorly and the synovial membrane posteriorly. It is composed principally of adipocytes but there are also abundant blood vessels and nerves.

There are two other adipose structures in the anterior knee, namely the prefemoral (or supratrochlear) and quadriceps suprapatellar fat pads. In figure one these fat pads are not shown but lie anterior to and posterior to the suprapatellar bursa respectively

The physiological role of the infrapatellar fat pad is uncertain. The following functions have been proposed:

Hoffa's disease refers to infrapatellar hyperplasia and fibrosis accompanied with anterior knee pain as described by Professor Albert Hoffa. There is inflammation, hypertrophy, and fibrosis of the fat pad with repetitive injury. It can also be a source of pain in knee osteoarthritis. In some chronic forms the fat pad may undergo metaplasia to form an osteochondroma.

Hoffa's disease most commonly affects those between 30-40 years of age and appears more common in females.

History: Mechanical anterior knee pain is the most common symptoms. In those where pain is triggered by walking up and down stairs one should consider patellofemoral pain syndrome. The patient may complain of a grinding feeling.

Examination: Sometimes hypertrophy of the infrapatellar fat pad is palpable and there may even be an effusion. There is pain on the anteromedial or anterolateral part of the knee. There may be a decreased range of flexion.

Hoffa's sign: with the knee flexed at 90°, the examiner presses laterally at the level of the patellar tendon and then passively extends the knee. The sign is positive if severe pain occurs during the final 10° of extension.

Imaging findings are unreliable on ultrasound and MRI in the chronic phase. In the acute phase MRI is the most sensitive modality which can show oedema, bleeding. It may also show fibrosis in the more chronic phase.[1] Under ultrasound dynamic assessment can evaluate for impingement.[2]

Surgery is an option for some where partial or total excision of the fat pad is done and/or removal of osteochondroma. There is only low level evidence.[1]