From WikiMSK
WikiMSK > Regions > Hand and Wrist > Hand and Wrist Conditions > Keinbock's Disease
This is based on ported content from Orthopaedia.com
It is subject to the CC-BY-NC-SA license. This is an exception to the WikiMSK license. It is not for commercial use, but can be modified. 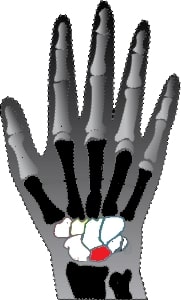 Kienböck’s disease is the eponym for avascular necrosis of the lunate (Figure 1), the bone between the scaphoid and triquetrum in the centre of the proximal row of the carpus. Left untreated, this disorder results in fragmentation with progressive collapse of the lunate and subsequent wrist arthritis.

Figure 2: Negative ulnar variance. This patient has negative ulnar variance, that is, the ulnar does not reach as far distally as the radius. Here, the entire articulation is given by the red lines. The blue lines represent the articular area not used because the ulna is too proximal. In this anatomic configuration the carpus articulates with the radius alone, thereby creating a smaller contact area for the lunate, with resultant greater pressure on it. (Pressure, is of course, force/area; and a smaller area for a given force leads to increased pressure.) In turn, the bone is more apt to fail mechanically.

Histopathologic studies of involved bone demonstrate reactive new bone and granulation tissue surrounding necrotic areas with empty lacunae, fatty necrosis, and absent osteoid. The osteonecrosis is thought to occur as a result of disrupted lunate vascularity. The lunate blood supply is tenuous as most of the lunate is covered with articular cartilage. Hyperextension or hyperflexion of the wrist may compress these vessels against the rim of the distal radius, damaging them and leading to decreased blood supply to the lunate resulting in osteonecrosis or death of the bone tissue. The small veins may also be injured and occluded leading to increased venous congestion and pressure in the bone, which may contribute to the development of nonviable bone.

Kienböck’s disease results from an infarction in the bone. Owing to ischemia, the bone dies – a process known as avascular necrosis or osteonecrosis. Dead bone cannot remodel (i.e., the process by which osteoclasts remove damaged bone and osteoblasts synthesize new bone). Accordingly, microscopic damage accumulates, and over time, the structural properties deteriorate and the bone begins to collapse, fracture, and fragment. In the lunate, osteonecrosis results in proximal migration of the capitate and loss of carpal height, altering wrist mechanics and increasing forces on the adjacent joints predisposing them to degenerative arthritic changes.

The exact etiology of Kienböck’s disease is unknown. Interruption of the blood supply to the lunate may occur at the level of the extraosseous vessels or small intraosseous branching vessels. Additionally, venous congestion or obstructed outflow has been shown to increase the pressure within the lunate and may contribute to the process.

Mechanical factors have also been postulated to be involved in the development of Kienböck’s disease. Negative ulnar variance (Figure 2), in which the ulna is short relative to the radius, is believed to be a risk factor.

Repetitive microtrauma may also play a role in the disease given the clinical observation that young male laborers are most commonly affected.

A combination of both intrinsic and extrinsic factors related to the patient’s anatomy as well as the forces the wrist is exposed to likely play a role in the disease.

Kienböck’s disease presents as wrist swelling and pain with resultant weakness of grip and limited wrist range of motion. Kienböck’s disease typically affects the dominant hand of male laborers aged 20 to 40 years. Progressive pain, without a clear history of acute trauma, is the primary presenting complaint. Patients usually localize the pain centrally over the dorsum of the wrist at the radiocarpal joint, which may be aggravated by gripping activities and wrist extension. Pain is initially just activity related, but as the disease progresses it may persist even at rest. Characteristic pain may be reproduced with passive extension of the long finger. 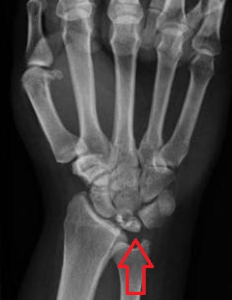 Figure 3: X-ray of wrist with Kienbock's 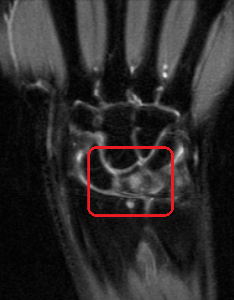 Figure 4: MRI of wrist with Kienbock's.

Plain radiographs are the initial diagnostic test of choice (Figure 3) but may be normal at the onset of the disease. A subtle linear fracture without sclerosis or collapse may be seen on radiographs early in the disease.

As the disease progresses, the lunate becomes increasingly sclerotic, often with one or multiple fracture lines. The lunate then begins to fragment and collapse leading to proximal migration of the capitate and hyperflexion of the scaphoid.

The end stage radiographic changes include joint space narrowing and arthritis of the radiocarpal and midcarpal joints.

Computed tomography (CT) best demonstrates the degree of bony destruction and structural collapse once there is radiographic evidence of sclerosis, fracture, or fragmentation of the lunate.

Laboratory studies are not generally necessary or useful in evaluating or diagnosing Kienböck’s disease. Inflammatory and rheumatologic markers are not elevated in contrast to infectious or inflammatory conditions.

The true incidence of Kienböck’s disease is not known or reported, as patients in the early stages may not present for medical evaluation or may elude diagnosis. This disorder most commonly affects males aged 20 to 40 years old. Affected women tend to be older, with less predilection for the dominant hand being affected. There is a higher incidence of Kienböck’s disease in patients with negative ulnar variance, thought to be related to increased forces transmitted across the radiolunate joint.

The differential diagnosis of wrist pain is of course extensive. Soft tissue injuries such as tears of the scapholunate ligament, lunotriquetral ligament, or triangular fibrocartilage complex can lead to chronic pain and/or instability of the wrist. Occult or missed carpal fractures, most commonly of the scaphoid, resulting in a nonunion, can also lead to persistent wrist pain and weakness. These soft tissue and bony injuries can be differentiated from Kienböck’s disease based on the location of tenderness on physical exam and, ultimately, on the radiographic findings.

Additionally, numerous conditions not associated with trauma can present similarly. Inflammatory or degenerative wrist arthritis results in chronic wrist pain but typically affects older patients or involves other joints in addition to the wrist. Dorsal ganglions can produce wrist pain with an insidious onset, but are associated with a palpable soft tissue mass that is not present in Kienböck’s. Ulnar abutment may also present with wrist pain and radiographic changes in the lunate, but it is differentiated with magnetic resonance imaging (MRI). Finally, avascular necrosis of the scaphoid (Preiser’s disease) or proximal capitate may present similarly to Kienböck’s but can be differentiated from it based on radiographic and advanced imaging findings.

Wrist pain associated with fever, chills, and erythema about the wrist may be due to underlying infection requiring urgent diagnosis and treatment. Night pain awakening the patient from sleep may be due to occult malignancy requiring accurate diagnosis to guide treatment. Pain with ulnar deviation of the wrist may be due to ulnar impaction, a diagnosis frequently confused with Kienböck’s disease. Finally, multiple joint pain and swelling may suggest a systemic inflammatory arthritis rather than a localized process like Kienböck’s disease.

Numerous treatment options have been described with variable results. The earliest stage of the disease is initially treated conservatively with splint or cast immobilization. If symptoms persist despite conservative treatment, surgery is considered. Surgical intervention, in early stages, includes revascularization procedures or joint unloading treatments to decrease the load on the lunate.

In patients with neutral or ulnar positive variance and preservation of lunate height, revascularization procedures can be considered. Implantation of a vascular pedicle as well as several different pedicled vascularized grafts have been described including the fourth extracompartmental artery, second dorsal metacarpal artery, a pedicled vascular pisiform, the pronator quadratus bone flap, dorsal distal radius pedicled grafts, and nonvascularized bone grafting. Each of these procedures requires an intact cartilage shell with no degenerative changes.

In patients with ulnar minus variance with no degenerative changes, joint leveling procedures such as radial shortening or, less commonly, ulnar lengthening, to produce 1-mm ulnar positive variance can be considered to offload pressure on the radiolunate joint. Capitate shortening to decrease the forces across the lunate has also been described (for ulnar neutral or positive variant patients).

If carpal collapse or degenerative changes are present, then proximal row carpectomy or limited fusion of the scaphoid, trapezium, and trapezoid or the scaphoid and capitate is preferable to correct and maintain carpal alignment. For patients with advanced pancarpal arthritis, total wrist fusion is the most reliable means of achieving durable pain relief.

Given the relative rarity of the disorder, current literature reporting treatment outcomes in Kienböck’s disease is limited to small retrospective studies. Non-operative treatment has demonstrated limited success, with most patients worsening or experiencing no significant change in their symptoms.

Vascularized bone grafting procedures have demonstrated successful outcomes. Several studies have demonstrated subjective pain improvement in greater than 90% of patients, improvement in grip strength to nearly 90% of the contralateral hand, and arrest of lunate collapse or evidence of revascularization in approximately 60-70% of patients. Joint leveling procedures such as radial shortening osteotomy have yielded similar results with well over 90% of patients noting improvement in their pain; however, fewer patients demonstrate evidence of lunate revascularization. While patients treated with revascularization or joint leveling procedures may have radiographic evidence of progression of arthritic changes, these do not generally correlate with subjective symptoms.

Several anatomical variations may predispose an individual to developing Kienböck’s disease. Negative ulnar variance is thought to make Kienböck’s disease more likely, as noted above. Likewise, radial inclination flattening, decreased extraosseous supply to the lunate, and diminished intraosseous arterial branching may increase the risk of the disorder. Additionally, several systemic conditions — including sickle cell anemia, gout, systemic corticosteroid use, and cerebral palsy — have been reported to have an association with Kienböck’s, although a clear increased risk warranting screening studies in these patients has not been shown.

Repetitive microtrauma may also increase the risk of Kienböck’s, as it has been noted that the condition commonly affects the dominant hand of laborers. This is likely the only modifiable risk factor; however, the exact offending activity has not been elucidated. As with many other musculoskeletal complaints, activity modification and avoidance of aggravating activities is a reasonable first step in preventing further injury.

Kienböck’s disease is named for the Austrian radiologist, Dr. Robert Kienböck who described the disorder in 1910.

Recognize radiographic and MRI images of lunate avascular necrosis. Relate surface anatomy of the wrist to underlying carpal anatomy to facilitate accurate palpation and localization of the point of maximum tenderness. Describe the rationale for various treatment options to patients with the disorder.

Part or all of this article or section is derived from Carpal Fractures by Orthopaedia.com, used under CC-BY-NC-SA