This article discusses the prostanoid biosynthesis pathway and cyclooxygenase enzymes. It is relevant to the topic of NSAIDs which is discussed in its own article. 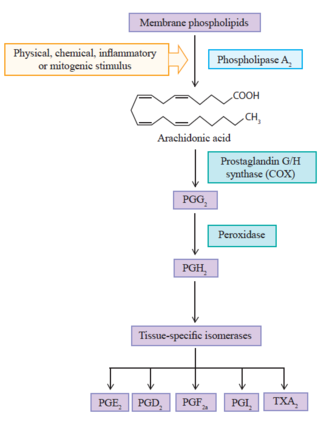 Biosynthesis starts with membrane phospholipids, present in the lipid bilayer of the cell membrane. The biosynthesis pathway has three main steps. (Figure 1)

Initially arachidonic acid is liberated from membrane phospholipids, by hydrolysis, by phospholipase A2 enzyme (PLA2). The second step involves the COX enzyme, through its cyclooxygenase site, which results in prostaglandin G2 (PGG2). The same COX enzyme converts PGG2 to prostaglandin H2 (PGH2) through the COX peroxidase catalytic site. One end of the COX enzyme has a membrane binding domain along with an epithelial growth factor domain, and the other end is the active enzymatic site.

Arachidonic acid can also be converted to leukotrienes by the enzyme lipoxygenase. 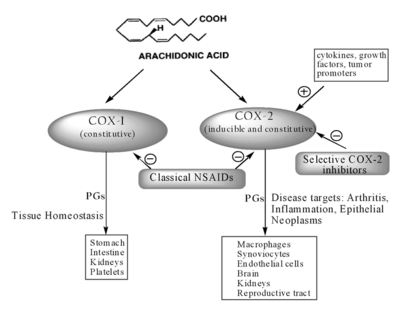 Figure 2: The actions of cyclooxygenases (COX-1 and COX-2). However COX-1 may contribute to inflammation, and COX-2 is constitutively expressed in several tissues.[2]

There are several different COX isoforms, but the most studied are COX-1 and COX-2. They differ only in the amino acid at site 523 with COX1 having isoleucin, and COX2 having valine. Both COX isoenzymes act on arachidonic acid, but the difference lies in genes that produce them and the factors that trigger those genes (Figure 2).

COX-1 is a "housekeeping" enzyme that is constantly expressed in nearly all tissues such as platelets, gastrointestinal tract, kidney, endothelium, uterus, and brain.

It is involved in the mediation of physiological responses through maintaining a basal rate of prostanoids in the tissues. For example is involved in cytoprotection of the stomach, platelet aggregation, and facilitating blood flow through tissues especially the stomach and kidney.

Traditionally COX-2 was thought to only be expressed by cells involved in inflammation such as macrophages, monocytes, and synoviocytes. The expression is triggered by tissue damage in order to promote repair. The production of COX-2 increases by 20 times in the presence of inflammatory stimuli, and so it is the primary enzyme that is responsible for the synthesis of prostanoids in acute and chronic pathological inflammatory states.

This is however an overly simplified view. COX-2 is not an exclusively proinflammatory inducible enzyme. It is basally expressed in many organs such as the ovary, uterus, brain, spinal cord, kidney, cartilage, bone, and the gastrointestinal tract. It plays a more complex physiological role than previously recognised. For example, in the kidney it is responsible for ensuring tubuloglomerular feedback.

Prostaglandin H2 (PGH2) has its own actions or can be converted to other prostaglandins such as PGE2, PGI2, PGD2, PGF2a, and TXA2.

Peripheral sensitisation: Prostaglandins regulate the sensitivity of polymodal nociceptors that are present in nearly all tissues. Many of these nociceptors can't be easily activated by physiological stimuli such as light pressure or slight increase in temperature. However, with tissue trauma and the release of prostaglandins, "silent" polymodal nociceptors are able to become excitable to pressure, temperature changes, and acidosis. This results in hyperalgesia and in some cases allodynia. This may be through effects on transient receptor potential vanilloid 1 (TRPV1) in sensory neurons, and tetrodotoxin-resistant sodium channels in dorsal root ganglia. Therefore, at least part of the analgesic action of COX inhibitors is thought to be due to the prevention of peripheral sensitisation.

Central sensitisation: COX-2 expression in the spinal cord may facilitate nociceptive transmission, with prostaglandins acting on the CNS to cause central hyperalgesia. There is widespread induction of COX-2 expression in spinal cord neurons and other regions of the CNS following peripheral inflammation. COX-2 is expressed in the dorsal horn and is upregulated briefly following trauma in the corresponding segment. Prostaglandin E2 has a role in central pain sensitisation. It directly depolarises wide dynamic range neurons into the deep dorsal horn, and reduces the inhibitory tone of the neurotransmitter glycine onto neurons in the superficial layers of the dorsal horn thereby disinhibiting nociceptive transmission.