Nonsteroidal anti-inflammatory drugs (NSAIDs) are members of a drug class that inhibit the activity of cyclooxygenase (COX-1 or COX-2) enzymes. This confers them analgesic, antipyretic, and anti-inflammatory effects, as well as inhibition of platelet aggregation. Side effects depend on the specific drug but largely include an increased risk of gastrointestinal ulcers and bleeds, heart attack, and kidney disease. This article should be read in conjunction with Prostaglandins and Cyclooxygenase Enzymes.

All NSAIDs, except aspirin (see below), act as competitive reversible inhibitors of COX, thus reducing the formation of various prostaglandins.

The traditional NSAIDs (ibuprofen, diclofenac, etc) operate on locations of the COX enzyme that are identical in both isoenzymes. This results in blocking of both the inflammatory effects of COX2 and the normal physiological effects of COX1. This results in potential side effects particularly on the kidney and stomach.

The selective COX2-inhibitors (celecoxib, meloxicam, etc) bind to a site on COX2 that isn't present or accessible on COX1. which reduces the side effects related to COX1 inhibition. There is overlap in the selectivity of some traditional NSAIDs with selective COX-2 inhibitors like diclofenac and celecoxib which have similar COX-1/COX-2 IC50 ratios (the measure of selectivity of COX isoforms).[1]

The except to the rule of competitive reversible inhibition of COX is aspirin. Aspirin irreversibly acetylates a key amino acid (serine 529) on the active site of COX with a covalent bond, leading to permanent enzyme inhibition by interfering with the binding site of arachidonic acid at the active site on COX. This covalent binding means that the antagonistic effects only cease when the receptor or membrane are replaced.

Another slight exception is indomethacin, a old NSAID that is no longer available in New Zealand. It evolves from non-competitive binding to permanent binding.

Paracetamol also deserves special discussion. It was traditionally stated that it acted centrally and was a weak inhibitor of COX-1 and COX-2. It actually acts on both peripheral and central COX enzymes, is a weak anti-inflammatory agent, and has preferential COX-2 inhibition. It acts on COX as a reducing agent within the peroxidase site.

Many of the side effects of NSAIDs are due to COX-1 suppression, such as gastrointestinal ulceration and bleeding, and platelet dysfunction. Selective COX-2 inhibitors were developed with the idea of avoiding the unwanted side effects that are elicited by COX-1 inhibition. 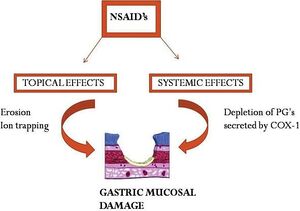 The gastrointestinal side effects are due to both direct irritation and through reduction of prostaglandin synthesis.

Normally, the "good" prostanoids stimulate the secretion of mucus and bicarbonate, increase blood flow, and promote epithelial proliferation. By inhibiting prostaglandin synthesis, the gastric environment is more susceptible to topical erosion by both exogenous and endogenous factors.

The acidic properties of most NSAIDs initiate mucosal damage. The drug molecules remain in a non-ionised lipophilic form in the acid environment of the stomach. They enter into surface epithelial cells where they dissociate, and trap hydrogen ions, inducing lesions. This is called "ion trapping". They also reduce the hydrophobicity of gastric mucus, allowing HCL and pepsin to damage the epithelial surface.

Compounding the above, is that a reduction of thromboxane results in a favourable bleeding environment.

The risk of peptic ulcers in high risk patients can be significantly reduced by the co-administration of a proton-pump inhibitor. However this combination does not protect against damage to the lower gastrointestinal tract. Using COX-2 inhibitors rather than traditional NSAIDs also reduces the risk.[2]

Some practical guidelines for prescribing with regards to gastrointestinal risk: 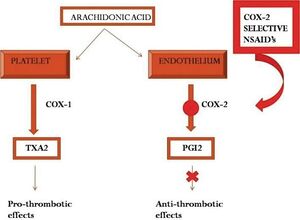 The long term use of both traditional NSAIDs and COX-2 inhibitors confers cardiovascular risks. The mechanism for this relates to the previously unrecognised role of COX-2 expression in basal conditions, and the blockade of COX-2 dependent prostaglandins such as prostacyclin.

Prostacyclin is an inhibitor of platelet aggregation and also has vasodilatory properties, and is produced by endothelial cells. Prostacyclin is reduced by over 60% by both traditional NSAIDs and COX-2 inhibitors. Theoretically, the increased risk of vascular events would be mitigated by reduced production of thromboxane A2 by platelets. Thromboxane is a prostanoid that promotes platelet aggregation. However, COX-2 inhibitors, having by definition no affinity for COX-1, do not reduce the production of thromboxane by platelets. These effects on thromboxane and prostacyclin may create a prothrombotic state.

It was therefore previously thought that COX-1 inhibition was protective due to inhibition of platelet aggregation through the thromboxane effect. But this effect only occurs with suppression of >95% of COX-1 activity. This level of suppression is only seen with low-dose aspirin and in some people with naproxen dosed at 500mg twice daily. This is why traditional NSAIDs (ibuprofen, diclofenac), except naproxen, are also associated with a cardiovascular risk. In fact, the rate of serious vascular events is similar to COX-2 inhibitors and any non-naproxen NSAID.[2]

Rofecoxib (Vioxx) and valdecoxib (Bextra) were withdrawn from the market due to the increased number of severe thromboembolic events with short term treatment. This has resulted in the change in labelling of all COX inhibitors to encourage taking them at the lowest effective dose for the shortest possible duration.

Some practical guidelines for prescribing with regards to CVD risk:[2]

The effect on salt and water retention is due to the loss of prostaglandin induced action on ADH. This can increase blood pressure. Naproxen can increase the mean arterial pressure by 3-4mmHg.

Nephropathy is a rare side effect. It is more likely in high doses, and in patients with CHF, CKD, hypovolaemia, and disorders of the RAAS system. Interstitial nephritis, nephrotic syndrome, and papillary necrosis are all underlying pathophysiological mechanisms. NSAIDs should be avoided in those with chronic kidney disease.

Indomethacin has the highest risk for nephropathy. Intermediate risk drugs are ibuprofen, naproxen, and diclofenac. The risk of selective COX-2 drugs on renal function is not clear.[4]

Hepatotoxicity is a very rare effect, and can manifest and cholestatic, hepatocellular, or mixed injury. The risk is increased substantially in those with rheumatic diseases with a RR of 10.9.

COX-1 inhibition is the mechanism for aspirin hypersensitivity and unrelated NSAIDs in some patients with asthma and in some patients with chronic urticaria-angioedema. In these cases, COX-1 inhibition results in activation of the lipoxygenase pathway which induces bronchospasm and nasal obstruction. Arachidonic acid is converted to leukotrienes via the lipoxygenase pathway.

In accordance with the role of COX-1 in aspirin-induced asthma, selective COX-2 inhibitors have reduced risk on re-exposure. Importantly, many traditional NSAIDs have a very high risk of hypersensitivity in aspirin hypersensitive patients (table 2). [5]

The naming scheme of NSAIDs is related to the base molecule from which they are derived.

Ibuprofen (≤1200 mg daily) and naproxen have the lowest cardiovascular risk, but have an increased gastrointestinal risk. Moderate doses of celecoxib may be non-inferior to naproxen and ibuprofen for cardiovascular safety.