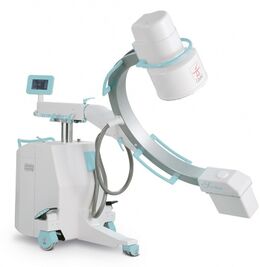 A C-arm is used to guide needle placement under fluoroscopy

The waves produce ion movement which creates friction and the energy is dissipated as heat. Heating nerve tissue >45 degrees causes neural blockade, and heating to 60-100 degrees induces protein coagulation and tissue death. Conventional RF lesion done at 80-85 degrees for 60-90 seconds. Placement is confirmed normally by fluoroscopy. Sensory +/- motor testing can be done but this is controversial and is not generally done in New Zealand. The most important thing is having the patient awake so they can inform you of any unwanted symptoms has the probe heats up. When using traditional radiofrequency, probe placement must be parallel to the target nerve. This is the technique used in New Zealand, but unfortunately many centres overseas do not do this and this greatly reduces benefit. Pain often recurs after ~400 days when it comes to medial branch neurotomy, but the procedure can be repeated.

Traditionally it has only been used to treat chronic facet joint mediated pain in those who have confirmed facet joint pain as diagnosed by medial branch blocks. More recently we have seen much expanded use, but this expanded use has not occurred in New Zealand.

Only the first two are routinely done in New Zealand and have the most evidence. 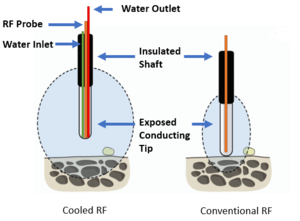 Cooled radiofrequency probes have a special tip allowing cold saline to run through it. It is cooled, but not cold. i.e. it is not about freezing the tissue.

The water cooling with saline decreases charring of structures immediately adjacent and allows the extension of the heated field. More energy is able to reach the nervous tissue.

Energy transfers to a relatively large field (8-10mm), even distal to the probe tip. Energy transfer through a conventional probe is only 3-4mm, and does not extend distal to the probe. The shape in other words is different, with a spherical lesion for cooled, and elliptical lesion for conventional. With a conventional probe, heating must be done adjacent to any nerve. This is not necessary with a cooled probe, allowing a greater variety of approaches.

Go to the articles in the see also section for the evidence behind its utility. It is superior to conventional radiofrequency for sacroiliac joint (due to the variable nerve course) and lumbar disc denervation (due to the larger field), but is equal when it comes to lumbar facet joint denervation when done with correct technique.