A variety of radiofrequency procedures have been developed for the treatment of proven sacroiliac joint pain. The term "precision treatment" refers to treatment of a proven pain generator unlike treating "non-specific low back pain." In research either an intraarticular block or lateral branch blocks are performed for precision diagnosis, and two blocks are preferred to reduce the false positive rate. Lateral branch blocks do not necessarily block sensory information from the ventral surface of the joint. A 2015 systematic review by Simopopoulos et al of radiofrequency procedures found high heterogeneity, and a meta-analysis was not feasible.[1] In general cooled radiofrequency is the only procedure with positive RCT evidence [Level 2]. The author is not aware of any Musculoskeletal Medicine specialists in New Zealand using cooled radiofrequency neurotomy for any use case. Traditional radiofrequency neurotomy for sacroiliac joint pain does not have good evidence. Repeated intraarticular prolotherapy injections is another treatment option with some evidence. [Level 2]

There are two RCTs based on controlled blocks. An anteroposterior approach is faster and equal in efficacy to the traditional oblique approach.[2]

One retrospective case series investigated 150 patients with sacroiliac joint pain diagnosed clinically. All first had intraarticular bupivacaine and triamcinolone. 88 had at least 75% pain relief. Of those 88, 58 had a second injection of which 39 had further relief. Of those final 39 patients, 13 had at least 50% relief that lasted less than 6 weeks, and 26 (45%) had relief that lasted longer than 6 weeks (36.8 ± 9.9 weeks)[5] 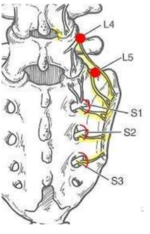 Location is variable person to person, side to side, and level to level.

Cooled radiofrequency neurotomy techniques are the only intervention with positive RCT evidence.

A retrospective trial by Cheng et al in 2013 compared cooled RF and traditional RF. Patients were selected based on >50% pain relief to two positive IA blocks. The two groups had equal outcomes. Success was defined as >50% pain relief. At 3 months: 50-60% both groups, 6 months: 40% both groups, 9 months: 30% both groups. There was bias potentially favouring CRF overall. The CRF group was younger, had more steroid (there was optional steroid given at the time to reduce neuritis), more lesions per level, and the patients had more previous spine surgery.[9]

A meta-analysis was published in 2018 that included 7 studies, with 2 RCTs. Cooled RF had a mean 3.81 NRS reduction. Both RCTs were assessed as low risk of bias.[10]

There is no positive RCT evidence for other techniques such as conventional, pulsed, strip, or bipolar radiofrequency neurotomy. Cohen in 2009 published a study which found that the only predictor of success was whether cooled RF was used. [11]

There is one negative RCT looking at the Simplicity III probe which allows a single point of entry to ablate the sacroiliac joint innervation in a strip lesion, plus a secondary entry point for the L5 dorsal root.[12]

A non placebo controlled trial used heterogenous techniques (cooled, bipolar or simplicity III) and had negative results. This study, one part of a set of three RCTs on spinal RF treatments, has received a large amount of critisism.[13]

There are two positive non-placebo controlled RCTs evaluating minimally invasive sacroiliac joint fusion with the iFUSE implant system for confirmed sacroiliac joint pain based on a positive diagnostic block with greater than 50% pain relief. [14][15] There were large improvements in pain and disability over the control group of conventional medical management. Polly et al allowed radiofrequency procedures, while Dengler et al didn't. These studies were industry funded, partially industry authored and had no sham group and so should be interpreted with caution.

The iFUSE system involves the fluoroscopic insertion of 2-4 triangular implants through the ilium across the sacroiliac joint into the centre of the sacrum lateral to the neural foramina. The implant is coated with a porous material allowing fixation of bone. The triangular shape allows immediate stabilisation and minimises micromotion and rotation of the joint.