Sacroiliac joint pain is common, and the structure is the source of pain in 16-30% of cases of chronic low back pain. The area can be injected at the bedside, but the gold standard is fluoroscopic guidance. Joint access is not always straightforward and failure to enter the joint is common. See Sacroiliac Joint Precision Treatment for more information about precision treatments for this structure.

The sacroiliac joint is around 1-2mm wide and is formed within S1, S2, and S3. The concave sacral surface joins with the convex ilium surface. The joint has an interlocking mechanism due to an irregular sacral surface. The capsule is often indistinguishable from the surrounding ligaments. The strongest ligament is the interosseous ligament. Other ligaments are the anterior and posterior sacroiliac ligaments, the sacrotuberous ligament which attaches to the coccygeal vertebrae and the ischial tuberosity, and the sacrospinous ligament which joins the ischial spine to the sacrum and coccyx. The anterior joint is thought to be innervated by the ventral rami of L4 and L5, and the posterior joint by the lateral branches of the posterior rami of L5-S4. The superior gluteal nerve contributes.

Before the injection assess any axial CT imaging available to determine what the orientation of the posteroinferior aspect of the joint is. 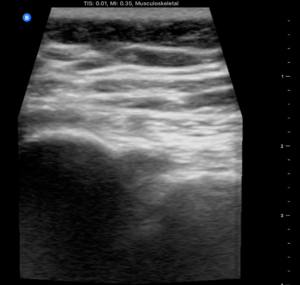 Figure 1. Left sacroiliac joint on ultrasound imaging, with the ilium on the left, and sacrum on the right
Video 1. Locating the left sacroiliac joint. Moving caudally on the transverse plane from the lower lumbar spine to S2, then laterally to find the SIJ

USS has been shown to have up to 90% success rate[1] and even if not intraarticular then USS ensures peri-articular injection which is believed to be effective.[2]

USS landmarks: probe in transverse/axial view from L5, down to the sacral median crest. Probe then goes lateral over the sacrum until the PSIS is visible. The notch in between represents the joint in an axial view. The dorsal SIJ ligaments should be visible connecting the sacrum to the ilium.

Mark out the probe position with permanent marker.

Local anaesthetic: 27gauge needle USS guidance around and on top of the dorsal ligaments.

Corticosteroid: 21gauge 70mm needle into joint and inject. Note the tactile sensation of pushing through leather then the release once in joint. Joint can take up to 2mm of steroid then will feel resistance.

This is not recommended. You can inject the dorsal sacroiliac ligaments but not the joint itself without ultrasound or fluoroscopic guidance. Because of the obliquity of the three dimensional anatomy blind injection is often unsuccessful [2]

This is a difficult technique. The sacroiliac joint is sinuous and there is great variability between individuals. Prior axial CT imaging can help with working out the orientation of the posteroinferior aspect of the joint is to determine the needle direction. The posterior aspect of the joint, where you direct your needle, is usually the most medial line on an AP view. Osteophytes may cover the posterior joint - they usually grow from lateral to medial. The synovial space is usually only around 1mm in right to left dimensions.

Figure 2. Oblique technique fluoroscopic view. The C-arm is rotated contralaterally until the two joint lines are superimposed. The inferior aspect of the joint is targeted.[3]

One RCT found that the PA approach was superior to the oblique approach.[3]

Evaluate 30-60 minutes post procedure with provocative testing. In the event of sensory and/or motor deficit then the injection lacks specificity and is non-diagnostic.