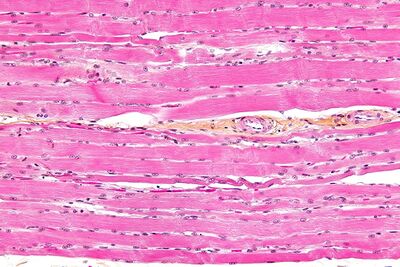 Skeletal muscle consists of 40-50% of total body mass. It is composed of muscle cells, organised networks of nerves and blood vessels, and an extracellular connective tissue matrix. The framework helps to support and protect the structure against injury. It is organised into individual units into tissues and organs that contract to produce joint motion and locomotion.

The physiology of muscle cell activation and deactivation is summarised as follows: 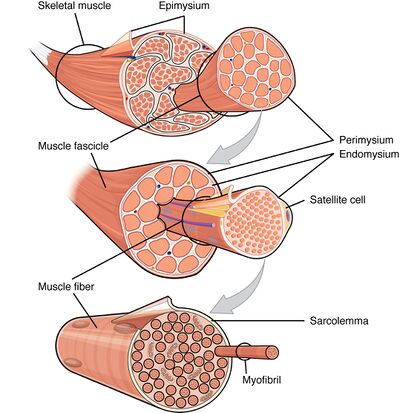 Muscle fibres are a syncytium of many cells fused together with multiple nuclei to form single long "cells". Muscle fibres contain numerous tubular myofibrils, which in turn are composed of repeating sections of sarcomeres. Sarcomeres are seen in both cardiac and skeletal muscle.

Muscle fibres are arranged in either a parallel or oblique direction along the long axis of the muscle. Oblique orientation is seen in pennate, bipennate, multipennate, and other more complex fibre arrangements.

Muscle fibres are surrounded by connective tissue which binds the contractile units together. The endomysium surrounds individual fibres and is delicate. The fibres are arranged into fascicles, which are visible to the naked eye. Fascicles are surrounded by perimysium. Epimysium loosely surrounds the whole muscle to allow for length changes. Blood vessels are also found within connective tissue.

Each muscle fibre has numerous nuclei, and these are generally found at the periphery of the fibre just under the sarcolemma. There are also satellite cells on the surface of the muscle which are thought to be stem cells.

The sarcomeres is the basic structural unit of striated muscle, and under microscopy appear as alternating dark and light bands. 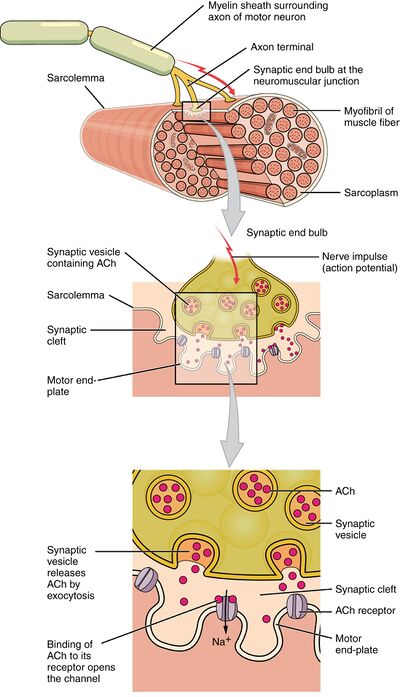 Motor End-Plate and Innervation: At the NMJ, the axon terminal releases ACh. The motor end-plate is the location of the ACh-receptors in the muscle fibre sarcolemma. When ACh molecules are released, they diffuse across a minute space called the synaptic cleft and bind to the receptors.

Nerves enter the muscle at the motor point of skeletal muscle. The axons of each nerve cell branch several times, and in doing so every muscle fibre is contacted by a single nerve terminal. The point of contact is called the motor end plate, and it is here where we see cellular communication between the nervous system and skeletal muscle.

Motor units are stimulated to induce contraction through an action potential that arises from the cell body of the nerve. The action potential is propagated down the axon from the ventral horn to the skeletal muscle. At the motor end plate the electrical signal from the nerve is transformed, through an in-between process of chemical transmission, into a similar electrical signal within the membrane of the muscle fibre. Chemical transmission occurs across the synapse of extracellular space between the two membrane systems.

Acetylcholine is the key neurotransmitter and this is stored in the presynaptic axon in vesicles. When an action potential arrives at the terminal axon, there is an influx of calcium into the cell, which causes the vesicles to fuse with the terminal axon membrane, and calcium is released into the synaptic cleft. The acetylcholine diffuses across the synaptic cleft and binds to a receptor on the muscle membrane surface.

Acetylcholine is deactivated by acetylcholinesterase and other less specific enzymes in the extracellular space and basement membrane. The breakdown products can be reabsorbed by the terminal axon for resynthesis.

The neuromuscular junction is important in several pharmacological and disease processes

Muscle contractile force is increased by by both increasing the frequency of stimulation to make the same motor units work harder, and by recruiting more motor units. There is an ordered an sequential recruitment of motor units and regulation of activation frequency. This allows for optimising of muscle contraction and limb motion. 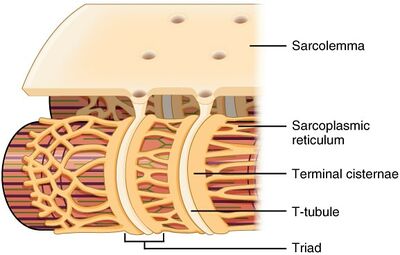 With the onset of depolarisation at the end plate, the electrical impulse propagates down the muscle membrane and reaches the interior of the cell through an intricate membrane system. This intricate system allows communication of surface signals into the deep regions of the muscle fibre, allowing rapid signal impulse transmission throughout the cell.

The intracellular calcium concentration is controlled in order to provide an on-off switch to contraction. Calcium ATPase is a protein found in the membrane. There are other glycoproteins with high affinities for calcium. 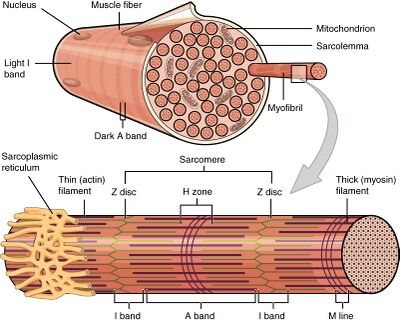 Muscle Fibre A skeletal muscle fibre is surrounded by a plasma membrane called the sarcolemma, which contains sarcoplasm, the cytoplasm of muscle cells. A muscle fibre is composed of many fibrils, which give the cell its striated appearance. 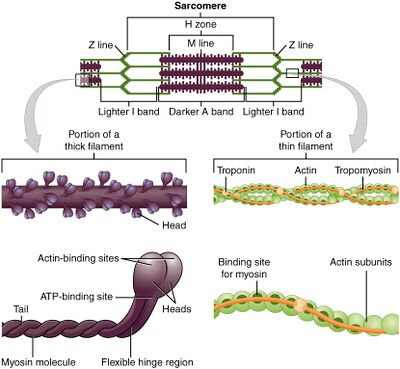 The internal structure of a muscle fibre contains parallel elements called myofibrils which have a distinct banding pattern with a regular arrangement of alternating dark and light bands on light microscopy with a repeating period of 2 to 3 μm. The repeating units are called sarcomeres. This ordered structure is a result of the molecular structure of the contractile proteins.

Troponin and tropomyosin are regulatory proteins that are linked to the actin molecules.

Sarcomeres give striated skeletal and cardiac muscle their striated appearance.

The sarcomeres align in repeating units between two Z-lines. The Z-line is an important component of striated muscle. 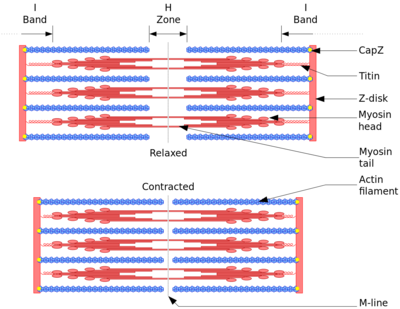 A simpler schematic representation of sarcomeres.

The sliding filament theory is the swinging cross-bridge theory of muscle contraction and is regulated by calcium.

Muscle cells are stimulated when a motor neuron releases the neurotransmitter acetylcholine, which travels across the neuromuscular junction and binds to a post-synaptic nicotininc acetylcholine receptor. There is a change in the conformation of the receptor which allows sodium ions to flow into the muscle cell and an action potential is generated. The action potential travels along the T-tubules (T for transverse) towards the sarcoplasmic reticulum. At this site the depolarisation of the membrane from the action potential activates voltage-gated L-type calcium channels in the plasma membrane. Calcium flows inwards from these channels and activates ryanodine receptors which are also present on the sarcoplasmic reticulum. This mechanism is called calcium-induced calcium release.

The presence of calcium allows the myosin heads access to the actin cross-bridging sites as above, thereby allowing muscle contraction. Once calcium ions are pumped back into the sarcoplasmic reticulum, contraction ceases, and relaxation occurs.

During contraction, A-bands stay the same length, while the I-bands and H-bands shorten, allowing the Z lines to come closer together.

The force from cardiac and skeletal muscle contraction is generated by the shortening of individual sarcomeres. Force transmission can be directed either parallel (major force), or lateral to the long axis of the sarcomere. 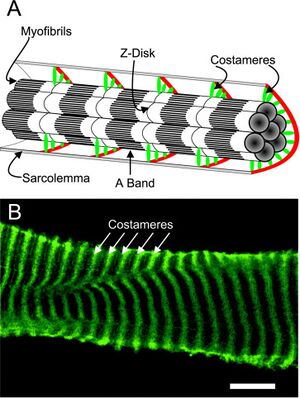 Costameres A: showing costameres as circumferential elements that couple peripheral myofibrils to the sarcolemma in periodic register with the Z-line. B: An inside-out sarcolemma that was mechanically peeled from a single myofibre and stained with antibodies to γ-actin to reveal the costameric cytoskeleton.

Costameres are subsarcolemmal protein assemblies that are found circumferentially around striated muscle tissue. They are associated with the Z-line in peripheral myofibrils which forms a structural anchor and site for cell signalling.

Several of the constituent proteins of the costameres are defective in many muscular dystrophies, cardiomyopathies, and myopathies.

Proprioception occurs through peripheral sensory input that describes the magnitude and rate of change of muscle length, tension, joint angle, and stretch of skin. Skeletal muscles have two encapsulated mechanoreceptors that provide movement-related feedback, namely the Golgi tendon organ and the muscle spindle. The Golgi tendon organ monitors the tension of the muscle, created through muscular contraction but not passive stretch. The muscle spindle monitors the length of the muscle. Joint receptors sense the end range of position of the joint.

Muscle tension is sensed by Golgi tendon organs by responding to the force generated by muscle. it is a sensory receptor that lies in the myotendinous junction, more commonly at the insertion rather than the origin of the muscle. They are present in almost all skeletal muscles with interesting exceptions being the orbicularis oris of the face and lumbricals of the hand. The Golgi tendon organ is simpler than the muscle spindle and has received less research attention than the muscle spindle.

The Golgi tendon organ is enclosed in a connective tissue capsule. Most have a fusiform shape but some are bifid and trifid. The capsule forms tight collars at the proximal and distal ends of the collagen bundle.

A single Golgi tendon organ is innervated by a single Ib fibre which provides the sensory component of the Golgi tendon reflex. While a single Ib fibre can innervate two or sometimes three tendon organs. It is termed Ib to distinguish it from the Ia fibres found in the muscle spindle, but the conduction velocities almost completely overlap except for the fastest conducting fibres. They are large diameter myelinated fibres (Aα). The terminal branches of the Ib fibre intertwines among the collagen strands. The terminals form spirals and sprays and are intimately associated with the collagen strands.

Each tendon organ samples the contractile tension that is generated by a small population of motor units. When a muscle generates force, the sensory terminals of the Ib fibres are compressed which opens stretch-sensitive cation channels. An inverse myotatic reflex occurs through synapse with interneurons. 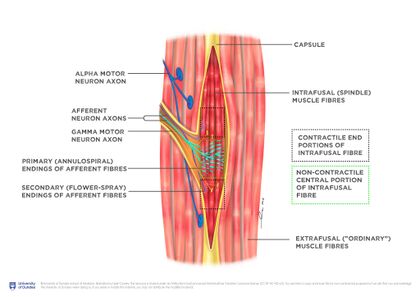 Muscle spindles are stretch-sensitive mechanoreceptors located within skeletal muscle and monitor the length of the muscle. They have higher density in muscles that require greater proprioception. The muscle spindle consists of specialised, striated, intrafusal muscle fibres that lie parallel to the fascicles of the normal force-producing extrafusal fibres.

The afferent innervation of muscle spindles is through larger primary Ia fibres (annulospiral endings - may be involved in dynamic responses) and smaller secondary II fibres (flower-spray endings - may be involved in static responses). There is a single Ia fibre for each spindle that spirals around the fibre (both nuclear bag and nuclear chain). group II fibres predominately innervate nuclear chain fibres and have smaller spirals. However this is the classic description in cats. In humans there is no spiralling, and secondary fibres also terminate on nuclear bags.

The efferent innervation is through γ fusimotor fibres or β skeletofusimotor fibres and these fibres supply both nuclear chains and nuclear bags. γ motor neuron function helps to regulate the sensitivity of muscle spindle afferents as length detectors.

When a muscle lengthens, the muscle spindle is stretched, which causes a stretch reflex through increased alpha motor neuron activity. Alpha-gamma co-activation may help keep the spindles taut with muscle contraction, however this is a very complicated area of study with competing theories.