From WikiMSK
WikiMSK > Anatomy > Bones > Sternum
This is ported content from StatPearls
It is subject to the compatible CC-BY license. 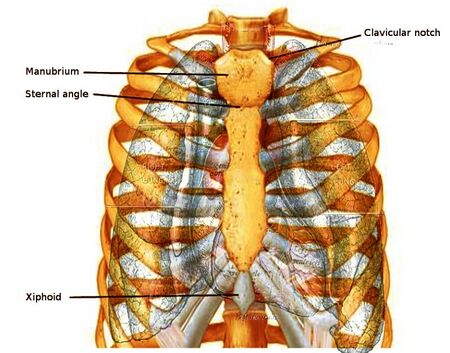 The sternum is a partially T-shaped vertical bone that forms the anterior portion of the chest wall centrally. The sternum is divided anatomically into three segments: manubrium, body, and xiphoid process. The sternum connects the ribs via the costal cartilages forming the anterior rib cage. The manubrium is the broad superior segment, the body is the middle portion, and the xiphoid process is a narrower distal segment forming the partial T-shape. The anatomical position and variations make the sternum an important bony structure of surgical significance. In addition to the anatomy of the sternum, clinical and forensic implications of the sternum are also topics in this article.

During the 6th developmental week of fetal life, the sternum develops independently from a pair of sternal bands called “sternal bars” which are concentrations of mesenchymal cells on either side of the midline.[3] By the 10th week of intrauterine life, these two sternal bands arise from the parietal layer of the lateral plate mesoderm bilaterally, then convert into pre-cartilaginous structures that migrate and fuse in a craniocaudal direction to form the sternal plate. In the 7th week of intrauterine life, the mesenchyme condenses resulting in the formation of the primary cartilaginous model of the three sternal segments (manubrium sterni, the body of the sternum and the xiphoid process). The cartilaginous sternal model consists of six horizontal divisions known as sternebrae. The superior-most sternebra and the inferior-most sternebra ultimately represent the manubrium sterni and xiphoid process, respectively. The four sternebrae that lie in between represent the body of the sternum.[3] The first part of the sternum to form during embryogenesis is the manubrium sterni followed by the sternal body and the xiphoid process.

For the venous drainage, the internal thoracic veins drain into the brachiocephalic vein on each side.

There are several muscles (muscles of the neck, muscles of the thorax, muscles of the anterior abdominal wall) attached to the sternum.[1] The sternocleidomastoid, sternohyoid and sternothyroid attach to the manubrium sterni. The transversus thoracis muscle attaches to the body of the sternum and xiphoid process. Pectoralis major is another major muscle attached to the body of the sternum. The xiphoid process provides an attachment site for the diaphragm, the most important muscle of respiration, and the abdominal muscular including the external oblique, internal oblique, transversus abdominis, and rectus abdominis muscles.

Usually, females have a shorter and thinner body of the sternum when compared to males.

There are many variations in the sternum that commonly exist. Variations are most common in the distal-most region of the sternum. One of the most prevalent sternal variations is the bifid xiphoid.

Anatomical variations of the sternal angle also exist, for example, the sternal angle can be misplaced resulting in inaccurate counting of the ribs and thereby resulting in errors on physical examination of the chest and procedural errors during nerve blocks and needle thoracostomies. Also, a misplaced sternal angle can increase the risk of sternal fracture in blunt chest trauma. Sometimes an additional sternal symphysis “angle” can exist, which on imaging studies can mimic a sternal fracture, traumatic fissure or osteolytic lesion.[6]

Incomplete fusion of the cartilaginous sternal model can lead to the formation of a circular shaped sternal foramen.[8] This anomaly should not be mistaken for an abnormality during imaging studies of the thorax. Radiologists and surgeons should be well versed in the anatomical variations of the sternum. Moreover, the lack of awareness of the sternal foramen is a subject of concern for the forensic pathologist or anthropologist during the forensic examination of skeletal remains.

The sternum makes up one of the most important landmarks used by surgeons for various procedures.

Sternal Aspiration and Sternal Biopsy: These are procedures adopted to collect specimens of bone marrow from the sternum. The sternum is a commonly used site for collection of bone marrow because sternal hematopoietic marrow persists throughout life.[2] Examination of bone marrow is frequently indicated for the diagnosis of blood dyscrasias and metastatic cancer.

Forensic Profile of the Sternum

A surgical procedure-related fatality is a medicolegal death that requires further investigation. In such cases, a meticulous forensic autopsy is necessary. A forensic autopsy case report exists documenting a death from hemorrhage due to an iatrogenic penetrating injury of the thoracic aorta secondary to the procedure of bone marrow aspiration from the sternum.[36] Ultrasound-guided sternal bone marrow aspiration should be considered to minimize the risk of untoward incidents of fatal cardiovascular injury.[37] Utmost precautions should be carefully taken to avoid any uncalled for allegations of medical negligence.

Part or all of this article or section is derived from Sternum by Abdulraheem A. Altalib; Kathleen H. Miao; Ritesh G. Menezes., used under CC-BY-SA