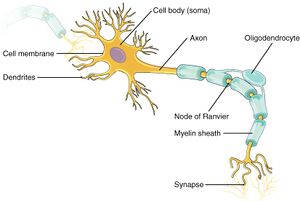 Neurons are cells derived from the same embryonic tissue as skin, namely the ectoderm. They are highly differentiated epithelial cells. Their membranes have a unique abilty to transmit electrical signals. The function of the neuron is to provide a rapid transmission of information, which is often over large distances. 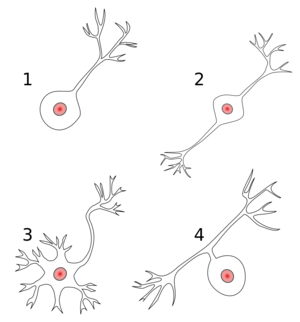 The nucleus is located in the cell body. Dendrites detect information to deliver to the cell. detect From the cell body is an extension of the membrane known as the axon that delivers information to a remote site. The axon terminal is called the telodendron.

In the peripheral nervous system, neurons have an analogous structure. In this situation, the cell body is offset from the axon. These cells are designed to reach out into the periphery to receive information. Their distal terminals have a receptor that detect stimuli from peripheral tissues, and is analogous to the dentrite. The axon refers to the entire conducting component of the cell, i.e. everything except the cell body.

The peripheral nervous system is classified into different types of nerve fibres. Different nerve fibres conduct at different velocities depending on their diameter and whether they are myelinated. If a mixed nerve is stimulated mixed activities can be recorded.

There are three peaks of activity, an A wave, a B wave, and a C wave. A waves are further subdivided into α, β, γ, and δ peaks, which are generated by myelinated neurons that are conducting at different velocities. The Aα waves conduct at 120m/s, with progressively slower velocities with the subsequent peaks. The diameter of the A fibres is proportional to their conduction velocity. The C wave is produced by unmyelinated fibres that conduct very slowly. Aα and Aβ are termed large nerve fibres, while Aδ and C fibres are termed small nerve fibres.

The efferent autonomic system is divided into the sympathetic, parasympathetic, and enteric nervous systems. Preganglionic nerve fibres are myelinated and use acetylcholine as their neurotransmitters. Postganglionic nerve fibres are smaller unmyelinated fibres that use noradrenaline as their neurotransmitters. Sweat glands are an exception and use cholinergic nerves. 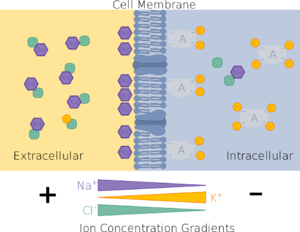 Differences in the concentrations of ions on opposite sides of the cellular membrane lead to a voltage called the membrane potential.

A nerve cell is able to maintain a membrane potential, abbreviated as Vm. Inside the cell are proteins that have a negative charge, and attract ions such as sodium and potassium. In the cell membrane are sodium and potassium pumps. They expel sodium ions and take up potassium ions. A concentration gradient is formed, with the net effect being that there is a relative positive charge outside the membrane and a negative charge inside the membrane. There is therefore a potential gradient across the membrane, and this measures around -70mV.

There are also channels in the cell membrane that can transmit sodium or potassium. At rest the channels are closed. The gates are able to open allowing sodium to rush into the cell, and potassium to rush outside the cell.

This is the ability to detect the stimulus. At the terminal of the nerve fibre is the receptor membrane, which can respond to a variety of stimuli. These stimuli can include mechanical, thermal, or chemical influences. The stimulus causes a deformation of the membrane, with the result being that sodium leaks into the nerve terminal through an ion channel.

Following the influx of sodium, a generator potential is created. As more sodium moves into the cell, the membrane potential change increases, leading to a greater depolarisation of the membrane. As the amplitude increases, it has a spread of influence along the length of the receptor membrane, this is called electro-tonic spread. The electro-tonic spread eventually reaches the conducting membrane of the neuron.

Measuring Charge across a Membrane with a Voltmeter. A recording electrode is inserted into the cell and a reference electrode is outside the cell. By comparing the charge measured by these two electrodes, the transmembrane voltage is determined. It is conventional to express that value for the cytosol relative to the outside. 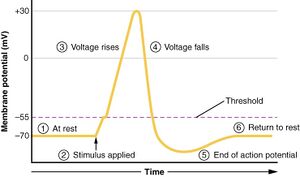 Graph of Action Potential. Plotting voltage measured across the cell membrane against time, the action potential begins with depolarization, followed by repolarization, which goes past the resting potential into hyperpolarization, and finally the membrane returns to rest.

Nodes of Ranvier are gaps in myelin coverage along axons. Nodes contain voltage-gated K+ and Na+ channels. Action potentials travel down the axon by jumping from one node to the next.

Certain nerve fibres are myelinated. The myelin sheath is not continuous but rather interrupted at short intervals called the nodes of Ranvier. Myelination allows for saltatory conduction. Instead of action potentials triggering the next most adjacent sodium channels in the membrane, electrical fields stimulate distant sodium channels at the adjacent node of Ranvier. This allows "jumping" of action potentials across the membrane, and this increases the speed of conduction.

Membrane depolarisation is directionally specific under normal circumstances. Once an action potential occurs at a specific site, for a short period that segment of membrane has a refractory period and is unable to respond to electrical information. If the trunk of the nerve is stimulated, action potentials are generated in opposite directions. Antidromic conduction means conduction occurs towards the cell body in the opposite direction of normal, while orthodromic conduction is in the correct direction away from the cell body. And so with trunk stimulation both antidromic and orthodromic conduction occurs. 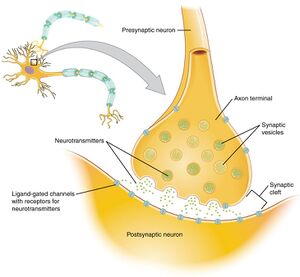 The synapse is a connection between a neuron and its target cell (which isn't necessarily a neuron). The presynaptic element is the synaptic end bulb of the axon where Ca2+ enters the bulb to cause vesicle fusion and neurotransmitter release. The neurotransmitters diffuse across the synaptic cleft to bind to its receptor.

These neurotransmitters may be uniquely released, or there may be several substances released simultaneously. These substances act on the receiving neuron. The dentrites of the receiving neuron contain dentrites that have receptors for these substances. With chemical bonding a miniature potential is generated. The potential is increased with more bonding of neurotransmitters to receptors, eventually causing a depolarisation of the dentrite. This depolarisation spreads across the cell body generating an action potential.

Synapses can be chemical or electrical. A chemical synapse provides the ability to control the flow of information. If control isn't required then neither is a synapse. Many nerves can transmit to one receiving nerve. Some of these may be excitatory and other inhibitory. Electrical synapses lack gain, the signal in the postsynaptic neuron is the same or smaller than the presynaptic neuron, but they allow bidirectional flow.

The types of neurotransmitters are defined by their substances. Only certain substances can act on certain receptors.

Inhibition of membranes can occur as well as depolarisation through inhibitory neurotransmitters. These inhibit the responsiveness through a process called hyperpolarisation by allowing potassium to leak out of the receiving neuron. The resting potential of the potential, which is normally around -70mV, is increased. This means a stronger stimulus is required to allow depolarisation to the threshold of -55mV.