Bradykinin is a potent inflammatory peptide messenger, and as a kinin is part of the kallikrein-kinin system which has wide ranging effects on the body.

Roles in the Body 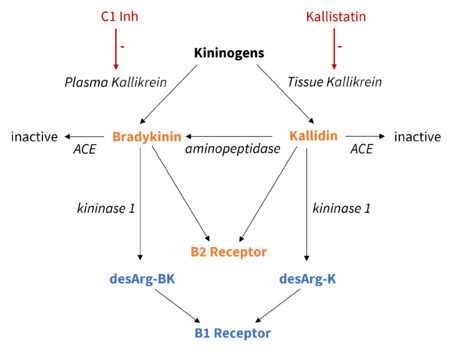 A simplified overview of the kallikrein-kinin system. Enzymes are in italics. Inhibitory factors are in red. Vasoactive compounds active on B2 are in orange. Compounds involved in fibrous tissue homeostasis and active on B1 are in blue.

Bradykinin and Kallidin (also known as Lys-bradykinin) are vasoactive, and cause the classical signs of inflammation. Kallidin is similar to bradykinin in its effects, and can be converted to bradykinin by aminopeptidase. They mediate their effects through kinin receptor B2.

The half lives of bradykinin and kallidin are seconds, as they are rapidly hydrolysed by kininase 1 to other biologically active des-Arg kinin derivatives. The des-Arg derviatives are involved in fibrous tissue synthesis. They mediate their effects through kinin receptor B1.

The B1 and B2 receptors are coupled to G proteins. In doing so they are involved in second messenger signalling at the site of nerve endings. B2 is expressed constitutively (constitutive means a gene is expressed in an ongoing manner) while B1 is expressed with trauma and inflammation.

In the normal state with intact tissue, bradykinin and kallidin bind to the B2 receptor. B2 is expressed constitutively, including both the central and peripheral nervous system. B2 has a role in acute inflammatory events.

When bradykinin activates B2, there is direct stimulation of nociceptors (C & Aδ fibres). Kinins cause sensitisation of sensory fibres to thermal, chemical, and mechanical stimuli.

There is a cascade of intracellular reactions through the protein kinase C (PKC) pathway that results in an increase in sodium conductance causing membrane depolarisation and influx of calcium through voltage gated calcium channels.

B1 expression is inducible. With chronic inflammation (compare to B2 with acute inflammation) and certain forms of persistent hyperalgesia, B1 is synthesised by the nociceptor cell body. B1 is then transported to the nerve ending membrane. B1 production is an important aspect of neural sensitisation and tissue repair through the des-Arg derivatives.

Note how the tanoxomy is the opposite to COX, with COX-1 being the "constitutive enzyme" and COX-2 being the "inducible one"

There is a synergy between bradykinin and other inflammatory mediators.

There are many downstream effects with the activation of the bradykinin system. For example it leads to the production of 12-lipoxygenase metabolites from arachidonic acid, and this activates the TRPV1 receptor.[2] TRPV1 is involved in mechanical, thermal, and chemical sensitivity. TRPA1 is also activated which is a mechanosensitive and thermosensitive channel.

Bradykinins, prostaglandins, and histamine are all mediators of vasodilation. Vasodilation being a process involved in clinical signs of inflammation - redness (rubor) and warmth (calor).

Bradykinin, prostaglandin E2, and histamine also all sensitise sensory nerve endings. This leads to the pain (dolor) aspect of inflammation.