Available approaches to access the epidural space are caudal, interlaminar, and transforaminal. The caudal approach allows a relative easy access and minimal risk of dural puncture. It involves placing a needle through the sacral hiatus to reach the epidural space.

The sacrum has five fused vertebrae and has a dorsal convex curve. The coccyx has three to five rudimentary vertebral bones, with a base that attaches to the sacrum, and has a triangular shape.

The sacral canal contains the epidural venous plexus that extends down to the S4 level, and is concentrated in the anterior wall of the sacral canal. It also contains epidural fat. The thecal sac generally terminates at the lower border of the S1 foramen in adults and S3 foramen in children. The PSIS is at the level of S2. Thecal sac puncture should be avoided.[1]

Caudal epidural steroid injection has been used in radicular leg pain, axial pain (internal disc disruption), and spinal stenosis. There is balanced evidence supporting the effectiveness in managing low back pain and radicular pain. A systematic review in 2012 found that "for lumbar disc herniation, the evidence is good for short- and long-term relief of chronic pain secondary to disc herniation or radiculitis with local anesthetic and steroids and fair relief with local anesthetic only. In managing chronic axial or discogenic pain, spinal stenosis, and post surgery syndrome, the indicated evidence is fair."[2]

There are several advantages for the caudal approach. These include the ease of entry, minimal risk of inadvertent dural puncture, it has been well studied, and it may be safer than other epidural approaches for those with coagulopathies or those on anticoagulants.[1]

There are also some disadvantages to this approach. High volume of fluid is generally needed. The S1 nerve is usually covered by the injectate (82% in nonsurgical and 88% in postsurgical patients), but there is a much lower chance of filling the L5 nerve (12% of nonsurgical and 30% of surgical). So overall it is only suitable for lower lumbar and sacral pathology. The possibility of incorrect needle placement is another disadvantage when done under landmark guidance. See complications for risks.[1]

A recent RCT found that caudal injections were more efficacious than selective nerve root injections.[3] In an RCT by Murakibhavi et al they used landmark guidance but checked needle placement with a C-arm, but without contrast injection, so it wasn't a full image guided injection. They compared caudal epidural to conservative management, at 12 months complete relief was found in 86% of the caudal group and 24% of the conservative care group. At three weeks it was 92% vs 32%.[4]

The following are factors that predispose to dural puncture in caudal epidural injections.[1]

The following are potential causes of difficulty entering the caudal epidural space.[1] 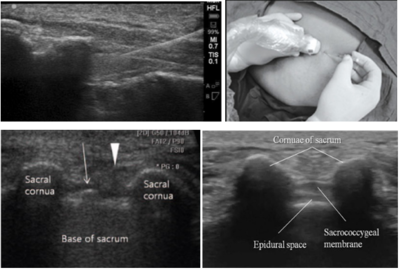 Ultrasound has very high success rates reported to be 96.9-100%. The main difficulty with the ultrasound guided technqiue arises in elderly individuals where the AP diameter of the sacral hiatus is significantly smaller.[5]

The advantage of fluoroscopy over ultrasound is that one can use contrast to confirm that the injectate reaches the target disc level. The technique described by Ogoke is as follows[1]

Monitor for allergy. Advised to keep active within pain limits, and is reassessed about 10 days later. Steroid remains in situ for about 2 weeks.

Up to 3-4 injections may be performed before declaring the therapy a failure. Max 0.6mg/kg or 40mg dexamethasone per year.

Methylprednisolone and triamcinolone are more effective than dexamethasone by the second injection. Dexamethasone requires a third injection in a significant number of cases.[6]