Local anaesthetics are unique in their ability to temporarily block conduction along nerves. They interrupt nerve conduction through the inhibition of influx of sodium ions, and 90% of sodium channels must be blocked in order to get conduction blockade. 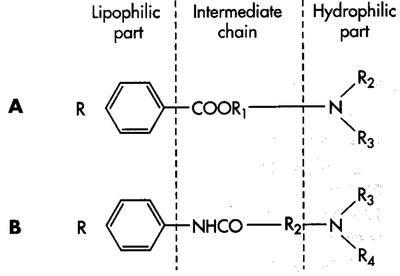 There are four principal characteristics of local anaesthetics.

Figure 2. The Henderson-Hasselbalch equation for drug dissociation.[2] Local anaesthetics are a weak base. The non-ionised form (B) is the active lipid soluble form. Lipid solubility or the partition coefficient determines the potency. Protein binding determines the duration. The ionised form (BH+) is the water soluble inactive form, used for storage. It is pH - pKa that determines the available active fraction.

The relationship can be estimated using the Henderson-Hasselbalch equation by looking at the ratio of non-ionised (B for base) to ionised molecules (BH+ for base a proton) as per figure 2. The pH is usually assumed to be 7.4 which is the pH of extracellular fluid in normal non-infected states. The pKa varies depending on the drug. 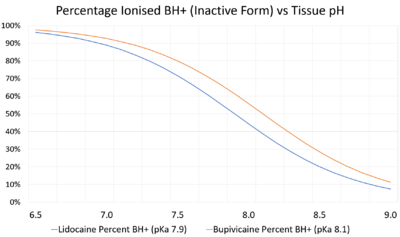 Local anaesthetics are often stored at an acidic pH, and virtually all of the drug will be in the inactive form. When the drug is injected there is a change in pH and this allows it to transform into the non-ionised active form. Likewise, when injected into an acidic environment due to infected or inflamed tissues, more of the anaesthetic will be in the inactive ionised form.

The intermediate chain is used to classify local anaesthetics into esters and amides. This determines the pattern of metabolism. Esters are hydrolysed in the plasma by esterases, while amides are metabolised in the liver (and kidneys). Both are excreted by the kidneys. Esters are not widely used, are poorly soluble, and have more side effects.

Most of the amide anaesthetics are quite stable and don't require additives. When adrenaline is added, this has a destabilising effect, and so the anti-oxidant sodium metabisuphite is added in concentrations of 0.1%. This compound is an allergen in some individuals, and can also cause neurotoxicity in low pH settings. Care should be taken with spinal and epidural administration. Adrenaline reduces blood flow to the area and therefore reduces plasma concentration of the local anaesthetic and increases the duration of action. This effect is less with long acting anaesthetics.

Local anaesthetic maximum doses vary depending on the site of injection. For example intercostal nerve blocks have a much lower maximum safe dose. The onset of action also varies depending on the injection site. For example subarachnoid injection results in rapid blockade even with small volumes, while brachial plexus blocks have a slow onset of action even with large volumes.

The volume injected influences the duration of action. This is through increasing dispersion by bulk flow and diffusion

Central nervous system toxicity is determined by the absolute concentration and rate of absorption into the CNS. There is a stepwise increase in symptoms with increasing toxicity.

Certain areas are highly absorbant. These include intercostal blocks, caudal and other epidural blocks, and major nerve trunk blocks. Subcutaneous infiltration is much slower.

The cardiovascular system is 4-7 times more resistant to local anaesthetics than the central nervous system. Therefore CNS side effects generally appear much earlier than cardiovascular effects. Bupivacaine has the highest cardiotoxicity

The treatment of CNS toxicity is largely supportive, with the use of lipid emulsion is severe cases. See Life in the Fast Lane for detailed management.

Patients can be allergic to the preservative methylparaben or metabisulphite. Allergic reactions are more common with ester anaesthetics.

This page or section deals with a topic that is not widely recognised or accepted.
Please use your clinical judgement and note that this is not necessarily standard practice in NZ.

Dr Trescott tested 250 patients with a history of anaesthetic failure in their response to mepivicaine, lidocaine, and bupivicaine. 7.5% were found to respond only to mepivicaine, and an additional 3.8% only to lidocaine. The rest were responsive to all three anaesthetics or bupivicaine. She concluded that patients are questioned on any history of poor response to local anaesthetic infiltration (e.g. at the dentist), and are skin tested prior to any invasive procedure.[3]

Patients with Ehlers Danlos Syndrome may be more susceptible to local anaesthetic resistance, however the evidence for this association is limited to case series and a survey.[4]

There has been some genetic studies on this topic, and candidate genetic variants of voltage gated sodium channels have been identified.[5]

The concept of local anaesthetic resistance is not widely supported or appreciated in New Zealand, or it is thought to be extremely rare. There are some factors that may explain failure apart from pure resistance that should be considered.

Local anaesthetics work the quickest on small nerve fibres. After blockade of these smaller fibres, the larger pressure sensing fibres will still be active. It may be that some patients are actually sensing pressure rather than pain, and due to the anxiety of having a procedure done are interpreting pressure as pain. In these patients it is anecdotally often helpful to give the anaesthetic a much longer time to work to enable blockade of these larger fibres.

In Musculoskeletal Medicine local anaesthetics are used for