From WikiMSK
WikiMSK > Regions > Shoulder > Shoulder Conditions > Clavicle Fractures
This is based on ported content from Orthopaedia.com
It is subject to the CC-BY-NC-SA license. This is an exception to the WikiMSK license. It is not for commercial use, but can be modified.

A clavicle fracture is a common injury seen after a fall on an outstretched arm or direct impact. A large majority of all clavicle fractures will occur in the middle third of the shaft. Traditionally, treatment was based on the premise that malunion (or even non-union) of clavicle fractures was well tolerated and imposed little morbidity. Accordingly, these fractures were usually treated with only a course of immobilization. Recently, that assumption has been questioned, and a greater number of clavicular fractures are currently treated operatively. Clavicular fractures that occur far laterally (known as distal clavicle fractures) must be considered distinctly, as they may involve the ligaments that suspend the glenohumeral joint. Also, because the clavicular physis is among the last to close (around age 21 or later), an apparent separation of the acromioclavicular joint in a young adult may actually represent a physeal fracture of the clavicle.

Figure 1: The left clavicle as seen from above. The sternum is medial and the acromion is lateral. The points of muscular attachment are color-coded: medially, the sternocleidomastoid is red and the pectoralis is green; laterally the deltoid is yellow and the trapezius is orange.

The clavicle (known colloquially as the collarbone), is a strut between the scapula (shoulder blade) and the sternum (breastbone).

Viewed from above, the clavicle is shaped like a capital “S”, attaching medially to the sternum at the sternoclavicular joint, and laterally to the coracoid and the acromion. The inflexion point – the middle of the S – is the portion of the bone most prone to fracture.

The pectoralis major, sternocleidomastoid and deltoid muscles originate from the clavicle and the trapezius inserts on it (Figure 1).

When the clavicle is fractured, the proximal (medial) portion can be pulled superiorly by the sternocleidomastoid muscles, while the distal portion is pulled inferiorly by the weight of the arm. The fracture fragments can also be displaced superiorly or posteriorly, leading to tenting and necrosis of the overlying skin or neurovascular injury, respectively.

The coracoclavicular ligaments, namely, the trapezoid and conoid, attach from the coracoid process to the inferior aspect of the clavicle and help suspend the arm. The acromioclavicular ligaments resist anterior/posterior displacement of the distal clavicle relative to the acromion. The clavicle overlies the brachial plexus, as well as the jugular and subclavian blood vessels. 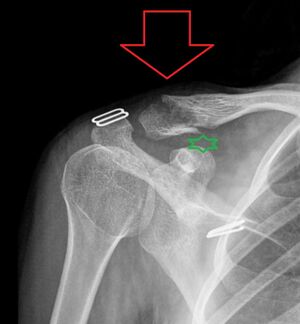 Figure 2: A distal (lateral) clavicle fracture (red arrow) may be in the region (green star) of the ligaments that attached the clavicle to the scapula.

Clavicle fractures most commonly occur following a direct blow or after a fall on an outstretched arm. Patients will often report feeling a snapping sensation at the time of injury. Patients may present with the relative arm held by their other hand across the body in adduction. Movement of the arm will exacerbate the pain.

Distal clavicle fractures (Figure 2) may present with no deformity, and tenderness around the acromioclavicular (AC) joint, similar to an AC joint separation.

A neurovascular and respiratory exam is critical to rule out injury to the brachial plexus, subclavian vessels, or the lungs. Strength, sensation, pulses and difficulty of breathing should be assessed. 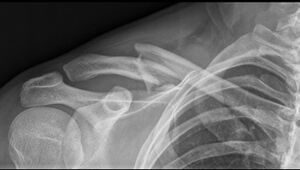 Figure 4: Shortening of the clavicle can be assessed by either of the following methods. On the left, the overlap between the ends of the medial and lateral fragments is measured directly; this is shown in red. At right, the entire medial-to-lateral length of both the injured and the normal clavicle are measured. As shown, the blue line represents the length of the shortened clavicle, the green line shows the length of the normal one, and the red line represents the difference.

Radiographs should also be obtained to rule out injuries to the glenohumeral joint and scapula. The required radiographs include the anterior-posterior (AP), axillary, and lateral (“scapular-Y”) views. Most mid-shaft fractures can be visualized with this view.

Anteroposterior radiographs can best assess a clavicle fracture, especially in the proximal portion of the clavicle (Figure 3). A posteroanterior radiograph can be used to assess shortening of the clavicle for surgical planning (Figure 4). Computed tomography (CT) imaging can be utilized for evaluation of intra-articular involvement of the medial and lateral ends of the bone; CT is not needed for acute midshaft injuries.

Arteriography may be helpful in evaluating vascular injury.

As with many traumatic injuries, the differential diagnosis narrows considerably after radiographs are obtained: the bone is either broken or it is not.

If there is no fracture, a clavicular contusion might be the diagnosis. The presentation is similar to that of a clavicle fracture with swelling, ecchymosis, tenderness and limited range of motion secondary to pain. Also, a ligament injury (especially in the form of an acromioclavicular joint separation) may be present. An acromioclavicular separation presents as pain over the acromioclavicular joint and distal shoulder. There may or may not be displacement of this joint. Sternoclavicular dislocation occurs after direct trauma to the chest wall and may present with deformity of the sternoclavicular joint and pain with arm movement. It is important to evaluate for fractures of the scapula, including the acromion and glenoid. If both the clavicle and glenoid neck are fractured, the glenohumeral joint has no connection to the axial skeleton. This is known as a "floating shoulder".  These injuries are associated with neurovascular injury. Rib fractures can also occur concomitantly with clavicular fractures given the traumatic mechanism of injury. 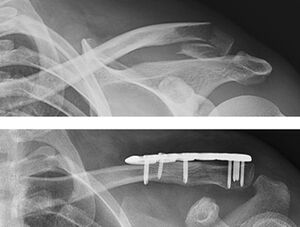 Figure 5: A clavicle fracture fixed with a plate.

Immobilization is indicated for fractures that are no more than minimally displaced - the majority of clavicle fractures. With this injury, the patient is initially placed in a sling, with gentle range of motion exercises started at ~2 weeks post injury, when patients are able to move the arm without pain. Strengthening exercises can be started 6 to 10 weeks after injury, when there is radiographic evidence of healing. Return to contact sports is typically allowed after 4 to 5 months, when there is radiographic evidence of fracture union.

Patients with clavicle fractures that are completely displaced and foreshortened by 2 cm or more are commonly indicated for surgery (Figure 5). If the ends of the fracture are not in contact and the clavicle is shortened by 2 cm or more, the risk of non-union increases. This rationale is controversial, in the sense that delayed open treatment can be reserved for symptomatic non-unions and malunions. Also, not every patient with a displaced and foreshortened fracture will be sufficiently symptomatic to warrant further treatment.

Any displacement of distal third fractures may be an indication for surgical treatment as the displacement implies a concomitant ligament injury and higher risk of non-union.

Urgent open treatment is indicated for open fracture (or skin tenting), with subclavian artery or vein injury, or when there is a scapular fracture as well (the so-called floating shoulder).

Polytrauma may also be an indication for open treatment for a fracture that, in isolation, would be indicated for closed treatment.

Open reduction and internal fixation can utilize intramedullary rods, or plates and screws. After internal fixation, patients are immobilized in a sling for 2 weeks; during this time passive range of motion exercises are performed. Rehabilitation is similar to non-op management.

While patient satisfaction and shoulder function is typically high following non-operative immobilization, there is a risk of malunion and nonunion. The risk of nonunion increases with increasing amounts of displacement.

Open reduction and internal fixation is associated with shorter time to union and better functional recovery. Compared to closed reduction and immobilization, surgical fixation results in significantly better outcomes 6 weeks after injury, but this difference dissipates after about 6 months. Unfortunately, there is a high complication rate, as high as 34%, and a significant reoperation rate, ranging from 18-25%. (Often, the second surgery is for hardware removal, not failure of the first operation.)

For about 2,390 out of the last 2400 years, non-operative treatment of clavicular fractures was the norm. In 400 BC, Hippocrates wrote this about clavicle fractures: “Patients attach much importance to it, as supposing the mischief greater than it really is, and the physicians bestow great pains in order that it may be properly bandaged; but in a little time the patients, having no pain, nor finding any impediment to their walking or eating, become negligent; and the physicians finding they cannot make the parts look well, take themselves off, and are not sorry at the neglect of the patient, and in the meantime the callus is quickly formed.” Likewise, in 1994, Mullaji and Jupiter (Injury. 25(1):41-5, 1994 Jan) said this: “Internal fixation of the clavicle is rarely necessary.”

It was not until 2007 that the Canadian Orthopedic Trauma Society wrote: “Operative fixation of a displaced fracture of the clavicular shaft results in improved functional outcome and a lower rate of malunion and nonunion compared with nonoperative treatment.” (Journal of Bone & Joint Surgery - American Volume. 89(1):1-10, 2007)

Clavicle fractures are the most common fractures in newborns. Many of these injuries are diagnosed after the baby and mother are discharged from the hospital post-partum. Brachial plexus injuries can also occur during these fractures, but almost always resolve.

Perform an upper extremity musculoskeletal exam with concern for neurovascular injury.  Interpret radiographs of the chest and shoulder for clavicle fractures, as well as other concerning signs such as rib fractures or widened mediastinum.  Apply a sling or figure-of-eight brace to a patient.

Part or all of this article or section is derived from Clavicle Fractures by Orthopaedia.com, used under CC-BY-NC-SA