is a commonly used analgesic and antipyretic.

In 1852 Anilide was acetylated to Acetanilide. The therapeutic effect of Acetanilide was discovered by accident when in 1886 it was delivered in error instead of Naphthalene. The physicians discovered its anti-pyretic effects. Later other Analine derivatives were synthesised with Phenacetin introduced in 1888. Mehring reported investigations with paracetamol in 1892, as a para-aminophenol derivative. Most of the early products were used as antipyretics rather than analgesics, at a time when opiates predominated. The analgesic effect was recognised in the last 1940s. Winthrop introduced "Panadol" in 1956. It was slowly accepted by the medical profession, and appeared in the BNF in 1963. The product has steadily replaced Aspirin products, primarily for musculoskeletal pain and headache. 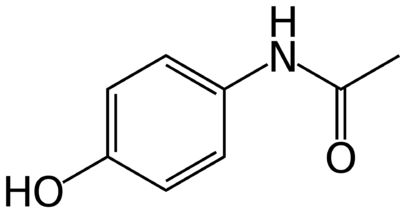 Traditionally it was stated that paracetamol acts centrally and is a weak inhibitor of COX-1 and COX-2.This has been shown to be missing the complete story in several regards.

Paracetamol in fact acts both on peripheral and central COX enzymes. NSAIDs and COX-2 inhibitors inhibit COX through competing with arachidonic acid. Paracetamol on the other hand acts as a reducing agent within the peroxidase site, which may explain why paracetamol doesn't work in the presence of inflamed tissues with high peroxidase levels - called the "peroxidase theory".

There is a preferential COX-2 inhibition for paracetamol in blood assay analysis. This may explain why short term administration doesn't result in gastrointestinal side effects, and why there is less bronchoconstriction in aspirin-sensitive asthmatics. This COX-2 inhibition raises concern for cardiovascular side effects, and indeed some research has found long term use of paracetamol to have the same risk of vascular events as NSAIDs, and also is associated with a higher risk of developing hypertension.[3] However other research has not found a link.[4]

Which central effects are largely responsible for Paracetamol effects on pain continue to be uncertain. The most accepted theory is that it has positive effects on the serotonergic descending inhibitory pathways. There may also be involvement with the opioidergic, eicosanoid, and nitric oxide systems. IT has been recently suggested that paracetamol is a pro-drug of a fatty acid amide called N-arachidonoylphenolamine, which acts directly on vanilloid subtype 1 receptors and indirectly on cannabinoid type 1 receptors in the CND thermoregulatory and nociceptive pathways. It shows selectivity for inhibition of the synthesis of PGs and related factors when low levels of arachidonic acid and peroxides are available but conversely it has little activity at substantial levels of arachidonic acid and peroxides, hence it's lack of an anti-inflammatory effect. The lack of such peripheral COX inhibition confers a safer side-effect profile.

It is rapidly and almost completely absorbed from the GI tract. The presence of food interferes with absorption. Rectal absorption is more variable. Oral and rectal administration can produce analgesia within 40 minutes, with a maximal effect at one hour. There are large variations in bioavailability. Oral preparations range from 63-89%, and rectal from 24-98%. This can make the onset and duration of action unpredictable.

It is distributed into most bodily tissues, with minimal protein binding at therapeutic concentrations but this increases with higher doses.

It is metabolised in the liver by oxidation, and excreted in the urine mainly as glucoronide and sulphate conjugates. The metabolites of paracetamol include a minor hydroxylated intermediate which has hepatotoxic activity. This intermediate metabolite is detoxified by conjugation with glutathione. However, it can accumulate following paracetamol overdosage with more than 200 mg/kg or 10g total paracetamol ingested. If left untreated it can cause irreversible liver damage. In children and infants, sulphate conjugate metabolism is predominant unlike in adults.

It is excreted in the urine mainly as the glucuronide and sulphate conjugates. Less than 5% is excreted as unmodified paracetamol with 85-90% of the administered dose illuminated in the urine within 24 hours of ingestion. The elimination half-life varies from one to three hours.

Nausea, vomiting, and abdominal pain occurs within 2-3 hours of toxic dose ingestion. CND excitement, stimulation, and delirium is then followed by CNS depression, hypothermia, respiratory and circulatory collapse. Finally acute liver failure occurs. Paracetamol blood level and time from ingestion determine the risk of hepatotoxicity using a nomogram. The antidote is N-acetylcysteine, which should be administered as soon as possible. This increases the availability of glutathione.

There is evidence that it may not be particularly safe. A systematic review of observational studies found that paracetamol use, especially at higher doses, was associated with increased mortality, cardiovascular adverse events (fatal or non-fatal myocardial infarction, stroke, or fatal coronary heart disease), gastrointestinal adverse events (gastroduodenal ulcers and haemorrhage), and estimated glomerular filtration rate decrease of at least 30mL/min/1.73 sq m.

Acute liver failure leading to registration for transplanation was twice as common in non-overdose paracetamol-exposed patients than with NSAIDs in a large case-population study. In clinical trials in chronic pain, patients taking paracetamol were four times more likely to have abnormal results on liver function tests than those taking placebo. It has very similar adverse event rates to ibuprofen over 3 months in patients with arthritis, and was not better tolerated than ibuprofen for short-term relief of common pain. However, reports of patients with an adverse event in acute pain studies were the same for paracetamol and placebo.

Absorption is decreased by pro-kinetics, anti-cholinergics, cholestyramine, and opioids. Oral anti-coagulant drugs may increase the AOC effect with increased risk of bleeding. Toxicity may be enhanced by other hepatotoxic drugs, enzyme inducers (AEDs), and alcohol. Excretion is affected by probenecid.

It can be given rectally or intravenously, and there is a transmucous buccal preparation.

The Oxford Analgesic League gives it an NNT of 3.8 for 50% reduction in pain. It can safely be used in combination with a range of other analgesics.

Machado in 2015 published a meta-analysis for the use of paracetamol in spinal pain and osteoarthritis. They concluded that is was ineffective in the treatment of low back pain and provides minimal short term benefit for people with osteoarthritis.[5]