The importance of having clear definition has been demonstrated in a 1989 study. They found the interobserver reliability of defining a patients pain pattern as being in the "back" to be very poor (Kappa 0.16). Defining the pain pattern as "buttock pain" had moderate agreement (Kappa 0.44); foot pain, leg pain, and thigh pain all had good agreement (Kappa 0.73, Kappa 0.96, and Kappa 0.78 respectively)[1]

It is important to get the patient to show you exactly where they feel the pain rather than simply take what they say for granted. Anecdotally, there are a wide array of terms that are used by patients to describe what taxonomically is lumbar spine pain. For example I have commonly heard patients call the lumbar spinal area the hip. I'm not sure if this is a New Zealand specific language pattern. 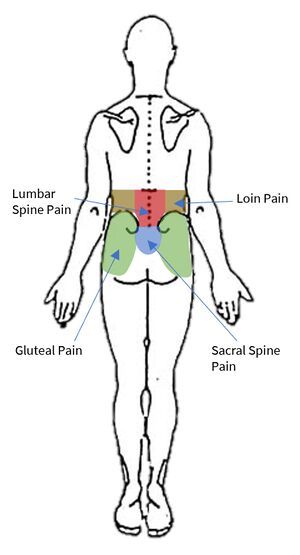 An interpretation of the IASP taxonomy for structures that may be termed the "low back".

The IASP taxonomy does not recognise the term "back pain," rather it categorises it into lumbar spinal pain and sacral spinal pain. There is also an overlapping definition called lumbosacral pain. These three categories constitute the colloquial term "low back pain." Another overlapping definition is thoraco-lumbar pain, but this is not low back pain. The IASP taxonomy are periodically updated, so to get the latest definition go to IASP and in part I (topics and codes) click on "spinal pain, section1: spinal and radicular pain syndromes." The definitions here are up to date as of August 2021.[2]

Not Low Back Pain

Pain in regions adjacent to the above topographical areas are not low back pain. There are a variety of other taxonomical definitions to describe pain in other areas.

"Referred pain over the lower limb girdle posteriorly may be described as gluteal pain. For this purpose the gluteal region may be defined as a sector central on the greater trochanter and spanning from the posterior inferior iliac spine to the anterior superior iliac spine. "

This is very commonly mistaken for back pain. Local causes of gluteal pain should be considered first before lumbar referred conditions.

"Pain immediately below [the gluteal pain region anteriorly[ should be qualified as anterior hip pain."

"Pain focused over the inguinal ligament may be qualified as groin pain."

"Pain located over the posterior region of the trunk but lateral to the erectores spinae is best described as loin pain to distinguish it from lumbar spinal pain."

The identification of loin pain is important because it is more likely to be due to a visceral disorder, for example it could lead to missing a diagnosis of pyelonephritis or renal colic.

"This term is an anachronism and should be abandoned. It stems from an era when the mechanisms of referred pain and radicular pain were poorly understood. It was used to describe pain that appeared to travel along the course of the sciatic nerve. The unfortunate legacy of this term is that it has been applied erroneously to any or all pain of spinal origin perceived in the lower limb. Furthermore, because nerve root compression has been believed to be the cause of sciatica, many forms of referred pain in the lower limb have been erroneously ascribed to this cause. Clinical experiments have shown that the only type of pain that is evoked by stimulating nerve roots is radicular pain as described above (Norlen 1944; Smyth and Wright 1959; McCulloch and Waddell 1980). Consequently, at the most, sciatica and radicular pain can be considered as synonymous. However, there is no justification on physiological grounds for equating sciatica and referred pain. The two are distinct in mechanism and quality. Pain in the lower limb should be described specifically as either referred pain or radicular pain. In cases of doubt no implication should be made and the pain should be described as pain in the lower limb."

"Referred pain in the lower limb may be qualified using standard anatomical terms that describe its topographic location, viz., thigh, leg, foot, digits I-V, anterior, posterior, medial, lateral, dorsal, plantar. Descriptors based on the course or distribution of nerves, such as “sciatica” and “anterior sciatica” should not be used because they convey an unjustified implication of the involvement of the said nerve. The term “calf’ can substitute for “posterior leg.”

The pathophysiology, natural history, and treatment response are different for each category. Certain investigations may only be appropriate for different time periods. The temporal pattern is part of the problem representation.

The standard temporal definitions are as follows:

Acute low back pain: Low back pain that has been present for less than 3 months

Chronic low back pain: Low back pain that has been present for at least 3 months.

Referred pain is best described in neurological terms as "pain perceived as arising or occurring in a region of the body innervated by nerves or branches of nerves other than those that innervate the actual source of pain". In topographical terms it is perceived in a region that is topographically distinct from the actual source of the pain. The topographical definition becomes ambiguous in cases where it is unclear where one region of the body ends and an adjacent region begins.

The IASP continues: "Referred pain may thus occur in a region that is either remote from or directly contiguous with the source of pain, but the two locations are distinguishable on the basis of their different nerve supply. In the context of spinal pain, referred pain may occur in the head, the upper limb girdle and upper limb, the posterior or anterior chest wall, the abdominal wall, the lower limb girdle and the lower limb. The distribution of referred pain in the head can be described in terms of the region encompassed based on the underlying bones of the skull or regions of the skull, viz., occipital, parietal, frontal, temporal, orbital, auricular, maxillary, and mandibular. Referred pain to the upper limb girdle may encompass all or only part of the girdle."

There are two mechanisms for referred pain: one arising from convergence (visceral and somatic referred pain), and one from stimulation of a nerve (neuropathic pain). In both somatic and visceral referred pain, the physiological mechanism is that of convergence of afferent pathways into the central nervous system.

Visceral referred pain is referred pain where the source lies in an organ or blood vessel of the body. With low back pain, the uterus and abdominal aorta are important considerations. Other viscera with higher segmental supply may cause back pain such as pancreatitis, but this may be due to irritation of the posterior abdominal wall, in which case the pain is not truly referred in nature.[3]

It is uncommon for somatic referred pain to occur without any back pain. If there is somatic type pain in the lower limb, then local causes should be assessed for. This includes gluteal pain in the absence of low back pain.

Radicular pain is commonly confused with radiculopathy. Radiculopathy is distinct, it is not defined by pain, but rather refers to conduction block along a spinal nerve or its roots with some combination of weakness, numbness, and hyporeflexia. With sensory fibre block numbness develops in a dermatomal distribution. With motor fibre block weakness develops in a myotomal distribution. Reduced reflexes can occur through either sensory or motor blockade.

The following table can serve as a guide. It is important to note that patients may have a combined state, experiencing both somatic referred and radicular pain. For example a prolapsed disc may irritate the dura of the nerve root (somatic) as well as the nerve root itself (radicular).