From WikiMSK
WikiMSK > Regions > Spine > Lumbar Spine > Lumbar Spine Conditions > Superior Cluneal Nerve Entrapment
Written by: Dr Jeremy Steinberg – created: 7 September 2020; last modified: 16 April 2022
This article is still missing information. Join WikiMSK to help expand it
This page or section deals with a topic that is not widely recognised or accepted.
Please use your clinical judgement and note that this is not necessarily standard practice in NZ. 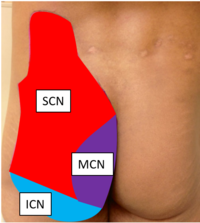 The lateral branches emerge from the dorsolateral border of iliocostalis lumborum, become cutaneous, pierce the thoracolumbar fascia, and descend inferolaterally across the iliac crest to innervate the posterior iliac crest and superomedial gluteus maximus. When crossing the iliac crest they run parallel to one another with those from lower levels lying most medially.[2] These different branches are called the medial branches (mSCN), intermediate or middle branches (iSCN), and lateral branches (lSCN). Do not confuse the middle and medial SCN branches with the middle cluneal nerve (MCN).

The lowest and most medial nerve (mSCN) arises from the deep fascia and crosses the iliac crest approximately 7-8cm from the midline. The mSCN often passes through an osseofibrous tunnel made up of the thoracolumbar fascia and the PSIS.[4] There is significant anatomical variation. In a cadaver study of 109 medial branches, 39% passed through and osseofibrous tunnel, and of these only 5% exhibited obvious entrapment, or 2% of the total dissected branches.[5]

See also: Causes and Sources of Chronic Low Back Pain

Kuniya and colleagues reported on prevalence data from 834 patients with chronic low back pain in an open access article. This is the best research that I could find in this area but it has multiple significant shortcomings.[6] Their team has published other recent literature on the topic. A recent open access review article on SCN and MCN entrapment was authored by Isu et al.[7]

They classified 14% of patients as suspected superior cluneal nerve entrapment, for which the criteria was

For those who met both criteria they did a nerve block. Unfortunately they did not specify the technique of their nerve block. This is important for us as readers to be sure they were target specific and the anaesthetic didn't spread to other structures such as the ipsilateral sacroiliac ligaments, facet joints, or other branches of the dorsal rami. We would want low volume of anaesthetic injected around the superior cluneal nerve under direct visualisation with ultrasound, and fluoroscopy with contrast to confirm lack of spread. It is highly possible that their cluneal nerve injections were actually trigger point injections. The magnitude and duration of the response reported by the authors is highly consistent with published reports on the effects of trigger point injections.

The 20mm reduction is a measure of therapeutic effect not of diagnostic validity. It tells us that the injections they did had a clinically meaningful effect in terms of pain reduction. It tells us nothing about the diagnosis. For diagnostic validity you want ideally 100% relief, but 80% could be arguably acceptable. Furthermore, it is very likely that a single block would have a high false positive rate, as that is what we see with single medial branch blocks for facet joint pain, due to the placebo effect. To overcome this we need to see at minimum a second block with a different local anaesthetic that has a different duration of action. The patient should be blinded to which anaesthetic is used. The response should be concordant, i.e. the patient should have a longer response to the longer acting anaesthetic, and a shorter response to the shorter acting one. In an even more ideal world, there would be a third placebo block, with the order all randomised. But because the purported pathology is nerve entrapment, we would need an anatomical not a pharmacological placebo. i.e. the placebo local anaesthetic block would need to be an injection into an adjacent structure like one of the erector spinae muscles. A pharmaceutical block would mean injecting normal saline around the nerve, which would potentially relieve symptoms due to the supposed pathology.

At the moment all we can say is that the potential upper limit for the prevalence of superior cluneal nerve entrapment is 8%, however it is likely to be much lower than that due to the above issues. It is a potentially compelling concept but we need further research with more stringent methodology. We also need to see patients in future prevalence studies having the standard common causes of chronic low back pain ruled out first (internal disc disruption, zygapophysial joint pain, and sacroiliac joint pain where appropriate). 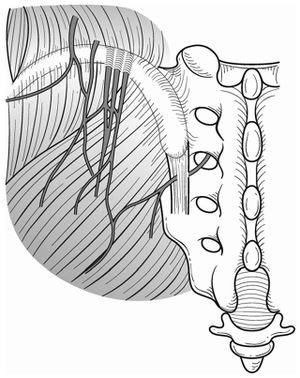 Superior cluneal nerve (SCN) entrapment is thought to occur where the nerve pierces the thoracolumbar attachment at the posterior iliac crest as it becomes superficial. Typically it has been described based on cadaver studies that the medial branch of the SCN passes through an osteofibrous tunnel and can be spontaneously entrapped there.[4]

However, Kuniya and colleagues found that in their 19 subjects requiring SCN release there were no cases of severe constriction within a bony groove on the iliac crest, but they found at least two SCN branches passing underneath a mixture of superficial thoracolumbar and gluteal fascia at the point of attachment to the iliac crest. They posited that true construction in the osteofibrous tunnel was rare, and that severe symptoms may be due to repetitive friction of the SCN under the fascia. In a further unpublished 26 cases, they had two cases of fascial constriction over the ilium.[6]

The prevalence of vertebral compression fractures is higher in those with SCN entrapment than in those without a SCN disorder (26% vs 12%), most commonly at T12-L3. It is theorised that this causes a sagittal imbalance with increased kyphosis of the spine, thereby irritating the SCN at its origin from unstable facet joints or by stretching the SCN itself.[6] Maigne described thoracolumbar syndrome, whereby thoracolumbar dysfunction causes one of or a combination of unilateral iliac crest pain, lateral hip pain, and groin pain. Knight et al hypothesises that pelvic malrotation and loss of sagittal balance may be an important aetiological factor, even without vertebral fracture and irritant angulation of the cluneal nerve pathway. [9]

The cardinal symptom is chronic low back pain with or without leg symptoms. Knight and colleagues believe that pelvic malalignment may be a relevant finding with pelvic anterior anteversion, and this may explain why transitional movements can be painful. Cluneal nerve pathology may exist in tandem with other spinal pathology. Symptoms may mimic sciatica.[9] Symptoms may have a neuropathic quality.[8]

In those with a SCN disorder, around 50% have leg symptoms, but only 1% have leg symptoms only. The most commonly aggravating features are walking, rising from sitting, standing, flexion, and extension. Patients often find that pushing above the iliac crest with their hands relieves symptoms. Some patients have claudication like symptoms. The pain can persist for many years and some patients can be severely disabled.[6]

For medial branch SCN pain, there should be maximal tenderness over the PSIS approximately 70mm from the midline and 45mm from the PSIS. coupling rotation to contralateral side and flexion can aggravate symptoms. As can flexion and contralateral rotation. Ipsilateral hip extension may reduce pain during flexion. [6] The medial SCN branches may pass around a small palpable lipoma.[9]

For the lateral nerve group there may be tenderness near the mid-point of the iliac crest, lateral to the tubercle. They tend to be more variable in location and therefore point of irritation.[9] 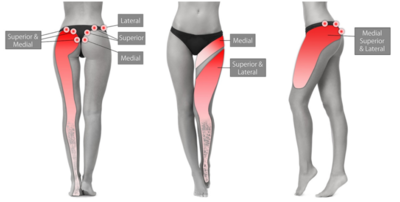 There is no agreed diagnostic method. The diagnosis can be considered by tenderness over the iliac crest causing provocation of symptoms. Pain relief following local anaesthetic injection can give further weight to the diagnosis.

In their study, patients were included when they met the first two criteria. A nerve block injection was performed. If relief of symptoms is obtained following injection they suggest that this gives further weight to the diagnosis. In their study, if repeated injections failed to relieve symptoms then they had SCN decompression.

I propose amending their third criteria to requiring positive controlled blocks with at least 80% (ideally 100%) relief and a concordant response to the different agents. The block should be done under ultrasound guidance with a small volume of anaesthetic injected around the superior cluneal nerve - I propose no more than 1.5mL.

This would be more consistent with the diagnostic methodology for the other much more evidence based causes of chronic low back pain.

Maigne would treat thoracolumbar syndrome with manipulation. Others have used pelvic mobilisation and pelvic realignment. Pelvic malalignment may be well-established and difficult to reverse, and Muscle Balance Therapy or Reformer Pilates could be considered.[9]

There is very rare risk of erectile dysfunction following injections to the SCN.[6]

Radiofrequency neurotomy has also been described [9]

Reports have been published on SCN release. In Kuniya's study, approximately 20% of patients proceeded to SCN decompression due to failure of having long term relief from repeated SCN nerve blocks. Predictors of success were pain duration less than 3 years, and consistently having relief for three days or more from SCN blocks.[6] Long term outcomes are satisfactory.[10]